Becky May Huff (1905 – 1988) was already very familiar with Pine Mountain Settlement School when Katherine Pettit, the School’s director, wrote her in April 1930. In her letter, Pettit asked about her plans to teach weaving, as well as country dancing, gymnastics and singing games at PMSS during the next school year. Becky May had entered Pine Mountain at the age of 10 and had graduated at the age of 21. She had had a thorough immersion in the ethos of the School.

Pettit suggested that, on Huff’s way back through North Carolina to work at Pine Mountain, that she stop at the J.C. Campbell Folk School in Brasstown for ten days of instructions from a Danish gymnastics teacher, as well as spend a few days with Mrs. Wilmer (Stone) Viner, a former Pine Mountain teacher, now in Saluda, NC, for dyeing lessons. 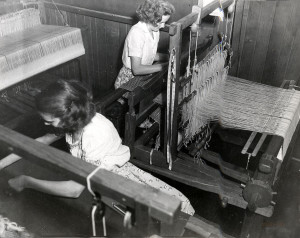 All this must have sounded good to Miss Huff. Her specialty was weaving which she had learned during her many years as a PMSS student and later as a Berea student and teacher of weaving at the college for three years. She responded that she was interested in all that Miss Pettit proposed, at the same time easing Miss Pettit’s fear that Huff, as a young woman, would leave PMSS soon to get married. Becky May and classmate Ova Sexton had courted while at Pine Mountain. Huff assured Miss Pettit that she wasn’t interested in marrying for several years yet.

All qualifications being settled, Miss Pettit welcomed her back to PMSS as a weaving teacher for the 1930-1931 school year:

I am especially anxious to have you because I think you have a real understanding of our desire to do the old things and not just make mercerized…things and that you will help to hold up the standards upon which this department was started. 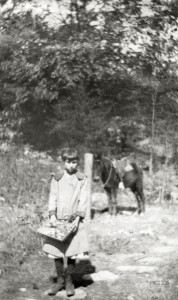 Miss Huff was eager to return to Pine Mountain, writing on May 18, 1930, to Miss Ruth B. Gaines, PMSS Secretary, that she “can hardly wait to get back to Pine Mountain again. I feel like I’m really going home again.” But by this time Miss Pettit had lined up a third stop for Huff on her way to Pine Mountain, making it necessary to delay her arrival even more. Besides visits to the Campbell Folk School and with Mrs. Viner, a scholarship was arranged for Huff by Miss Evelyn K. Wells for a week’s training at the Amherst Folk Dancing School so she might also instruct in that area, as well as weaving at the School.

After her student years at PMSS, Miss Huff studied at the Normal School at Berea College from September 1926 to May 1927. When she accepted the PMSS weaving position, she had been teaching for three years at Aiken Hall in Olive Hill, Kentucky.

Becky May Huff was compelled to leave the School when weaving classes were discontinued due to the slow sales of the Fireside Industries, the operation that sold the weavers’ products. So her promise to Katherine Pettit not to marry too soon became moot.

BECKY MAY HUFF: After Pine Mountain

There is evidence in a survey conducted by Everett K. Wilson of alumni of Pine Mountain that Becky May was not entirely happy with her life outcomes. She wrote in answer to the question, ” [I]…Needed more book learning. Not enough different studies.” She suggests more work in social studies. She noted that the training in industrial work was very helpful but, apparently, she found the transition to Berea difficult and soon after leaving she married her classmate, Ova Sexton, and returned to farm living. Marriage seems to have been uppermost in her mind following her departure from Pine Mountain and Katherine Pettit seems to have sensed her conflicts and her yearning for the “old ways.” Becky May summarizes her reflections in the following manner,

Pine Mountain was started and considered to be a school for poor mountain boys and girls. I think they should not be taught to imitate the ways of city boys and girls. This makes them dissatisfied with mountain living.

According to a report in the February 1936 issue of Pine Cone, a PMSS student publication, the couple had moved from Big Laurel, Kentucky, to Kittanning, Pennsylvania, a small town about 40 miles north of Pittsburgh. The article mentioned that Mrs. Sexton was continuing her interest in weaving. Strangely, Kittanning was the site of the 2010 pilot of the film Justified. The television series was eventually filmed in Harlan County and was based on events suggested to be part of Harlan’s history. In Kittanning, Becky May had, in many ways, gone home again.

BECKY MAY HUFF’s Son Looks Back

I was wondering if Pine Mountain Settlement School has any records on its early students. Both of my parents (deceased in 1988 and 1989) were students at the school. My mother always talked about Miss Pettit and a Miss Gaines. My father was Ova Sexton born October 18, 1915, and my mother was Rebecca Mae Huff born on March 10, 1905. I had found a pamphlet in their home about Pine Mountain which mentioned both my mother and one of her sisters, either Alafair Huff or Mallie Huff (Begley). It could have possibly been “The Pine Mountain Story 1913-1980” shown on your web page. …

My mother talked about her job at the school was to bring breakfast to Miss Pettit every morning. She also talked about teaching weaving. My mother gave her loom to my wife several years before she died because she wanted someone to appreciate it. She said the loom was hand made by her cousin Boone Callahan about 1932. I don’t know if this was the loom she used at Pine Mountain.

I ran across a newspaper clipping (undated and unsourced) which is titled “LOCALS.” It reads as follows: “Mr. Ova Sexton, a former student of Pine Mountain and Miss Becky May Huff, the weaving teacher of Pine Mountain were married during the Christmas holidays. We wish them much happiness.” On the reverse side of the clipping in the upper right corner are the words “Pine Cone” between two lines running across the article. I don’t know if this is the name of the newspaper or not. The article must have been published very early in 1932 since my parents were married in Harlan on December 27, 1931.

I know that Pine Mountain had a significant impact on their lives since they were always talking about it. They always had a large garden and grew much more than they could ever use. They always gave the excess to neighbors and friends. They also grew flowers and town folks would drive by their house just to see them. My father was not happy unless he could get his hands in the earth.

Although I have never been on the Pine Mountain campus, I have been past it several times when I was a child. My mother’s sister Mallie Huff Begley lived on Pine Mountain (Bledsoe) and we visited there annually during the 1950s. Hopefully, you will be able to help me find out exactly when my parents were at Pine Mountain. …

Thank you for your inquiries about your parents, Becky May Huff and Ova Sexton, students at Pine Mountain Settlement School.

We have a record of Becky May Huff entering in 1915, and being a student here until October 5, 1921. There is one reference to Becky May as “the first girl we had here” which would suggest that she was a student from the very beginning, in 1913, and formal “student folder” records weren’t kept until 1915. She re-entered in February 1922 and was here until May 10, 1925, and then was here again from August 1925 until September 1926.

There is frequent mention of Becky May and Mallie [Becky’s sister] in anecdotal records of the early days of the school. Mallie and Oscar Begley were prominent citizens of the neighborhood when I came here as a teacher in 1953, and I believe Mallie was still here when I moved back to Indiana in 1971. I have known Arlena Begley Scearse, who now lives with her daughter, Mallie Gail Scearse, “over the mountain,” these many years. I taught several of her children, and frequently see some of them who still live in this community, or “over the mountain.”

From Becky May’s folder, I have gathered that Almon Huff, one of the boys who died in the disastrous fire of the new schoolhouse in January 1918, was her brother. There is also mention of Becky May going to Berea, doing weaving there, and teaching weaving at PMSS and the Big Laurel Settlement later.

The Pine Cone was the student newspaper here. It often carried community news, and it sounds as if Becky May was the School “weaver” at the time of their marriage.

I can’t find Ova Sexton’s records. Unfortunately, that is not unusual, for students from the early years. Some records were lost in the 1918 Schoolhouse fire, and I’m sure some have been lost in other ways.

Boone Callahan was the superb woodworking teacher here for many years. My guess would be that he made a loom especially for Becky May, in addition to the looms she used at school.

I remember her talking about her brother (I didn’t know it was Almon) being killed in a fire….I have the document naming her as Postmaster at Big Laurel in March 1935. They must not have stayed there long because I found a lease in their name for a farm in Armstrong County, PA, commencing November 1, 1936.

I also have a picture of my mother which is marked on the back — “Becky May Huff, Olive Hill, 1929.” I’m not sure what, if anything, was at Olive Hill.

During the late 1940s and early 1950s when I was a young boy, my parents would travel from Pennsylvania to Kentucky every year to visit family. We always spend a couple of days with Oscar [Begley] and Mallie [Huff] Begley, Becky May’s sister] each year. Mallie’s mother, Mary Jane Huff, lived with her and Oscar at the time.