The article by Pine Mountain Settlement School staff member, Evelyn K. Wells, “A Little True Blue American” 1920, published in Over Sea and Land: Our Southern Mountains, (pp.138-139), describes with some embellishment Appalachian children who seek an education but often end up “educating” the teachers. Wells seems surprised at finding how much many of the children know and recognizes how much of the “knowing” mingles with local folklore. Wells, a trained folklorist, is keen on picking out connections with ancient English balladry and the typical Anglo-Saxon myths that abound in early literature about the Southern Appalachians.

The idea, prevalent at the time of publication of the article, while accepting the composite nature of race in the region, continued to put forward the idea that the “stock” of the Southern Appalachians was among the purest in America.  The principal argument was that majority of the people in the region were Scotch-Irish or Scots from the “Plantation of ULster” from the time of King James, and this could be proved by exploring the family names that prevailed in the area.  The idea of “composite” often only extended to the Huguenot names and the German names that also surfaced. What often puzzled the historians were the families that were designated “Malungeons,” and those that were African-Americans both of whom were seldom afforded recognition and more importantly, services given to the “true” Americans.

Yet, Wells’ embellished stories capture the reader and demonstrate the cultural back and forth of the early years in the Southern Appalachians and the earnest attempts to call attention to the need for educational and social programs for children in the region.

The hyper-nationalism of this promotional piece would have had a large appeal just following WWI when there was a renewed effort to bring educational opportunity to rural and isolated communities such as that at Pine Mountain. To ‘git larnin’ into the mountains of the Southern Appalachians can be found throughout the literature of various settlement schools, mission schools and church literature of the first decades of the twentieth-century. This piece is typical of that literature. 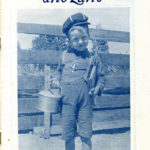 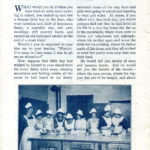 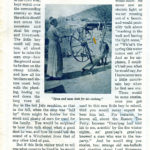 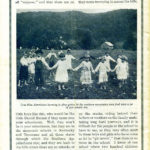 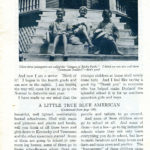