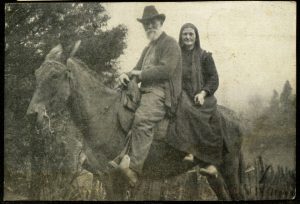 Calvin Nolan was a member of the Nolan Family that has been part of the Pine Mountain valley community for over 200 years. He was “esteemed highly as an honorable man and was known as an excellent conversationalist with a well-stored and active mind,” according to his obituary*, which also records that “Many years ago he served for 12 years as Circuit Court Clerk of Harlan County and for several years assisted his father, the late John Nolan, as superintendent of schools in Harlan County.” [*See GALLERY below for image.]

“Uncle” Calvin Nolan, as he was known by friends and family, tells his own story about his early pioneer days to an interviewer who recorded it in NOTES – 1921 (November, page 3).

If you press him to tell about his own life in the valley he will say, “Hit ain’t worth tellin’, -livin’ off so fer I didn’t git much education,-but I’ve had time to ponder on the Good Book, an’ hit calls for study if you’re to act by it. I’ve had my hand in politics hereabouts, and reckon we’ve got to keep the government clean. Look at that mountain! There haint nothin’ fairer in the world than hit October-colored as hit be now.”

“Well, I’ve seed a sight of changes in my day. Them war the days of Injuns behind trees and panters a-yellin’ of a night. I’ve seed the woods full of wild turkey and deer, and I’ve seed ’em go west that man wouldn’t molest ’em. My pappy used to throw stones out of the path and say they’d be a road through here some day, and now there is, and another ‘n a-comin’ across the top of the mountain, and there’s the School a-settin’ up the road.”

Mention of the School brings him to Victoria, his granddaughter. “Hit’s the only young thing the old woman and I have got, but hit’s the steadfast, studyin’ kind, so we’re a-sendin’ hit to stay at School and git hit’s chance.

“Some day, if you come ag’in when my mind haint so tuck up with ‘lectioneering for the new magistrate, and this here railroad strike that’s threatenin’ the country, maybe I can recollect somethin’ else fer ye.”

Cora Richardson, the great-great-granddaughter of Calvin Nolan, has provided a generous amount of information about her ancestors for the Nolan, Metcalf and Scearce family pages on the PMSS Collections website. Concerning Calvin Nolan’s family, Cora reported the following:

Sarah Jane (Blanton) Nolan died on February  5, 1929. Calvin H. Nolan died on August 27 of the following year. Both were buried in the Nolan Family Cemetery in Harlan, Kentucky.

Calvin H. Nolan, 85, descendant of one of the pioneer families of Harlan County and former county official, died at the home of his granddaughter, Mrs. John Turner, at Incline, Ky., Friday as a result of heart complications following an attack of pneumonia.

He suffered an attack of pneumonia last year but fully recovered and regained his usual robust health only to have heart complications that resulted in his death.

Many years ago he served for 12 years as Circuit Court Clerk of Harlan County and for several years assisted his father, the late John Nolan, as superintendent of schools in Harlan County.

Calvin Nolan was esteemed highly as an honorable man and was known as an excellent conversationalist with a well-stored and active mind.

During the Civil War, the guerrilla raided his father’s home and captured him and one of his uncles, but owing to his youth, he was spared, but his uncle, Adrian Nolan, was murdered by them, the guerrillas shooting him 18 times with muskets.

His uncle had just been appointed Collector of Internal Revenues and when the raiders found his commission, this sealed his doom.
[Source: The Harlan Daily Enterprise] 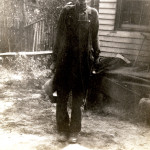 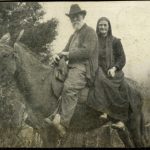 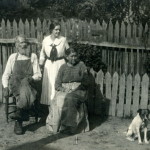 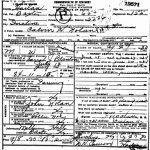