WELLS RECORD 19 PMSS Road 1913-1928 is a brief history written by Evelyn K. Wells, documenting the building and financing of The Road [Laden Trail] across Pine Mountain from Laden to Pine Mountain Settlement School. 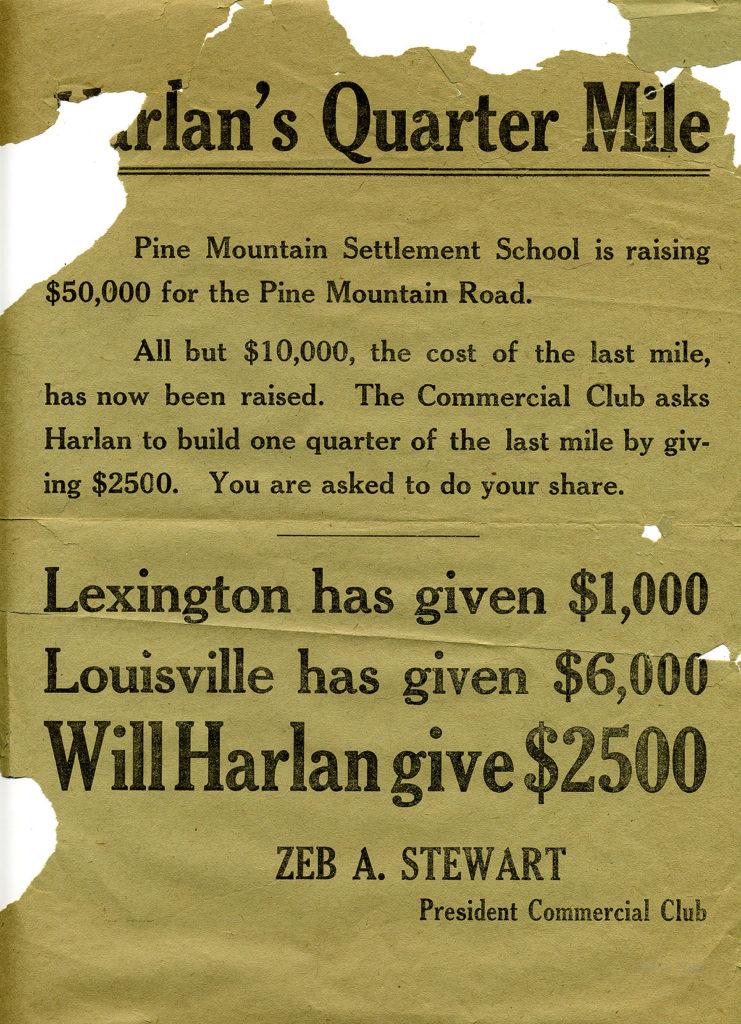 When Pine Mountain was started, there was a rough wagon road over the mountain from Rosspoint to Incline, fourteen miles each way from the School, and in the other direction, a road over Hurricane Gap to Poor Fork, about sixteen miles each way. Between those two points, there were only rough mule tracks or foot paths and early visitors to the school came over a trail that might be made impassable by the falling of a tree or the sliding of a boulder to say nothing of a washout. The need of a road therefore was obvious to the directors of the school, and they began to work for it at once.

At a meeting of the Local Advisory Board in 1913, it was decided to ask the Harlan County fiscal court to appropriate money for a good road over Pine Mountain. Early estimates place the cost of the road at $10,000, and in June 1914 at a fiscal court meeting, half that sum was appropriated, and the school started out to raise the other half by sending postcards asking for a dollar each to 5,000 people.

Miss Ethel de Long made several trips to Harlan in the fall of 1915 on road business, usually riding horseback both ways. The more they looked into the matter, the more expensive it proved to be. By the spring of 1917 engineers said the road would cost $50,000, and the plan was made for the school to raise half, and the state to give dollar for dollar. The School, however, had to raise the second half to loan the state, which promised to pay it back in annual installments of $1,200. These payments were to be put into our Endowment Fund. Miss Celia Cathcart, who had taught at the school in 1915-1916, went to work to raise the first half, in Ohio, Illinois, Indiana and Kentucky. Miss de Long, writing letters from the School, raised the second half, which was to be the loan to the state.

All this money-raising went on at a time when the School itself was barely struggling into existence and was committed to a heavy building program. Business conditions were unstable because of the war, and money was, therefore, harder to get.

One of the interesting events of the road campaign was Uncle Williams‘ visit to Louisville in 1917, where he was the guest of the Board of Trade and spoke on the need of the road. He was an impressive figure and made many friends for Pine Mountain.

In January 1918, surveying for the road began, though a preliminary survey had been made in 1915-1916. In May 1919, actual work on the road began, and by that time prices had soared so that we had to face the fact that the road was going to cost all of $100,000, the $50,000 we had raised would be only our half, and that none of it would come back to us for Endowment as we had expected. In 1922 the funds gave out, and the road had been graded only to the top of Pine Mountain. All the grading of this side and the final surfacing remained, and there was no more money.

Mrs. Ethel de Long Zande, therefore, went to Frankfort and after a month or so of lobbying, succeeded in having a bill passed which made the road a link in the chain of State Primary Highways between county seats, thus ensuring that, eventually, Kentucky would have to finish our road. At this point the School felt it could do no more; certainly it could not ask for any more contributions.

The hauling road down this side of the mountain was built by neighbors and county labor a couple of years later upon the further appropriation by the County of another $5,000. This hauling road which connects with the State road on top of the mountain does not follow the line of the permanent surveyed road.

This brief outline cannot attempt to go into the details of the matter — the tremendous efforts made, the complications of politics, engineers and surveyors, the crises when it seemed that work must stop, the journeys made at any minute and under any conditions. The Road correspondence is on file in the office, and Mrs. Holton (Miss Celia Cathcart) has full files also.

The following is a list of the 22 sections of Pine Mountain Settlement School History gathered by Evelyn K. Wells from 1913 to 1928: