The Mary Rockwell Hook 1940 Architectural Review letter is a key document for understanding the role of the Pine Mountain Settlement School Buildings and Grounds Committee. The document written in the 1940s describes the creation of the Buildings and Grounds Committee and outlines a charge for the Committee in 1940 and beyond. The planning outlined in here is a roadmap to the condition of buildings and roads on campus in 1940 and the plans made for the School’s architecture following the destruction of Laurel House I and the construction of Laurel House II and the simultaneous and new construction of the “Girl’s House” now known as “West Wind.”

This document is particularly relevant to the recent ARC grant work on West Wind and as an example of a planning document for the historic architecture of the School as the programming at the institution evolved.

CREATION of the Buildings and Grounds Committee
(Pages 1 of 7)

Just a year ago in April 1939 Mrs. Hook sent an informal report to the Board on the physical features of the school. In this report she made a request that a special committee be appointed to study the physical development of the school. Accordingly at the next meeting in New York last December such a committee was appointed, consisting of Mrs. Hook, chairman, Mrs. Elsmith, Miss Wells, Mr. Ball, and Mrs. Morris, ex officio.

This committee was called a Buildings and Grounds Committee. It was empowered to make a survey of the school plant, offer recommendations not only for improvement and repairs of the present buildings and grounds but to consider future needs as well and to formulate a tentative schedule of a building program over a range of possibility another ten or fifteen years. Before this committee had had any opportunity to function, the Laurel House fire in January catapulted us into an acute situation necessitating an immediate building program on a large scale.

p. 2
present buildings, two buildings should be erected to replace Laurel House. One to be the central dining room and recreation center with quarters for several workers and a separate girls house to accommodate about twenty-five girls and three workers.

See the detailed reports on the attached pages.

At this point, some confusion arose in the minds of some of the members of the Buildings and Grounds Committee as to whether they had, by the fact of the fire, automatically become the building committee for the new Laurel and the new Girl’s House [West Wind]. There was a question whether their jurisdiction extended that far and whether their appointment to the original committee carried responsibility for

p. 3
such a major project. In the absorbing business of the Lexington meeting, this was not made clear. therefore in April when Mrs. Hook, Mrs. Gratz and Mrs. Elsmith were within range of each other in Florida, they met informally at a middle point in Fort Myers. During their conference, this was discussed and an attempt made to clarify these positions and duties.
n
They came to the conclusion that it would simplify matters, save Mrs. Hook a tremendous amount of correspondence, and make action more direct, if we continued to act and operate as we have in the past on new building enterprises. Namely to recognize and count Mrs. Hook as the official school architect, responsible to the Board, free to call in any members of the Board or anyone from outside that she desired in consultation. This would free her from an unwieldy, scattered, committee to which she would feel obliged to report frequently would conserve her time, and make for more progress on the building. Thus, she serves the Board in a double capacity.

A. Recommendations on Repairs and Improvements

B. Improvements on Roads, Parking Facilities and Grounds.

Although the Board made no commitment in writing it seemed the sense of the February meeting that from the funds so providentially coming to us at this critical time, funds free to use for building purposes as expressed by the legatees some $65,000, including $18,000 insurance on Laurel House, might be so delegated if necessary. This would leave approximately a hundred thousand dollars to be added to the endowment fund from the recent legacies.

It was, we believe, the further sense of this meeting, that $5,000 of this might be allotted to necessary repairs and improvements. Those that have been itemized above, including the Doctor’s House for which the Executive Committee authorized up $1,500 (including $620 known as the Silver Jubilee Fund) would, it is estimated, come within this amount.

Funds that are coming in designated for Laurel House are being set aside for a special furnishing Fund. It is further hoped that friends of the school will want to give individual items. 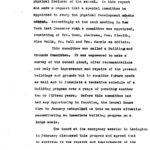 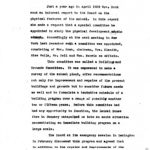 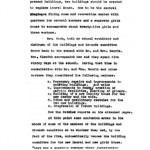 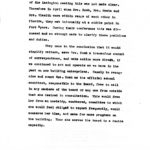 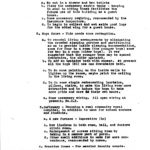 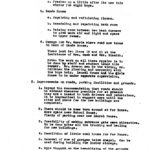 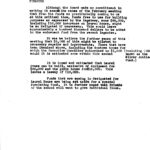