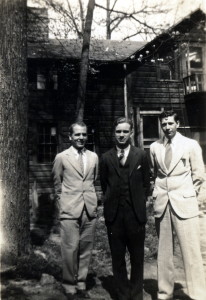 John Howard Young was one of many students from Antioch College in Yellow Springs, Ohio, who came to Pine Mountain Settlement School to further their experience through student teaching. John was particularly remembered by the PMSS staff as one who fit in well with the School’s programs.

The student teachers were supervised by Pine Mountain staff member, Margaret Motter, the school principal and teacher at Pine Mountain (1928-1938) and later head of the English department (1946-1949). In an evaluation of the Antioch program, Motter mentioned John Howard Young:

We had a good relationship with the co-ops. Some were better than others, but I think they helped us, and of course we helped them with their practice-teaching. Occasionally we had one who was rather special in adapting himself to the entire school program. John Howard Young, I recall was extremely helpful to me in directing simple dramatizations and in ballad singing. He also loved the folk dancing and was an enthusiastic participant. His part in this was contagious!

In an April 1929 report, Dr. Ida S. Stapleton described John Howard Young’s assistance with fighting a fire at PMSS’s Line Fork Settlement where she was doctor and co-administrator:

And now I must tell you what has happened just a week after our return. There was just a small fire on the hearth and having emptied a sodium [?] bimed [?] carton I put it on the fire to burn. It blazed up quickly, setting the ceiling on fire. … Mr. S[tapleton] went outside and gave the alarm by a great shout to our next door neighbors a quarter of a mile away and he and his wife came running to help.

Two of the workers from Pine Mt. had just come for the week-end and Mr. Young [John Howard Young] was immediately on the roof. Mr. S. began hauling up water from the shallow well at the back porch and Carter handed it up to Mr. Young as fast as he could pour it on. Miss Anderson carried it from the kitchen faucet that I attended. It did not seem possible that we could not put out that fire. But it was in between the dry shingles and the inner ceiling. After twenty-five pails of water the well went dry. Mr. S. and some other who had come to help started carrying out the contents of the house into the yard. Mr. Young stayed on the roof and the water kept running from the faucet so that Carter kept handing it up but it was a losing fight and at last Mr. Young had to leave the roof.

We all drew to a safe distance and watched it burn. Such agony! The wind blew the flames into the forest on the East. The fire soon caught the fence but by pulling down some twenty panels of it that danger was past. The trees around the Cabin and the leaves on the rocky hillside below it carried the fire so that it spread thru the forest to the top of the ridge and over on the other side.

The farmers on that side soon got to work and with a fire break removed the danger from their fences and the rain on the following Monday put out the last vestige of the fire.

…Mr. Young who had his first experience at a fire here carried the news over to Pine Mt. taking his first horse back ride at this time at night and thru the forest….

At the time John came to Pine Mountain, his home was in Soo Nipi Park, New Hampshire. After he earned a B.A. from Antioch College, his address was Montgomery, New York. Coming from such a different world, it is little wonder that he stood out in Miss Motter’s appraisal for his enthusiasm and easy ability to adapt to life in the mountains of Eastern Kentucky.