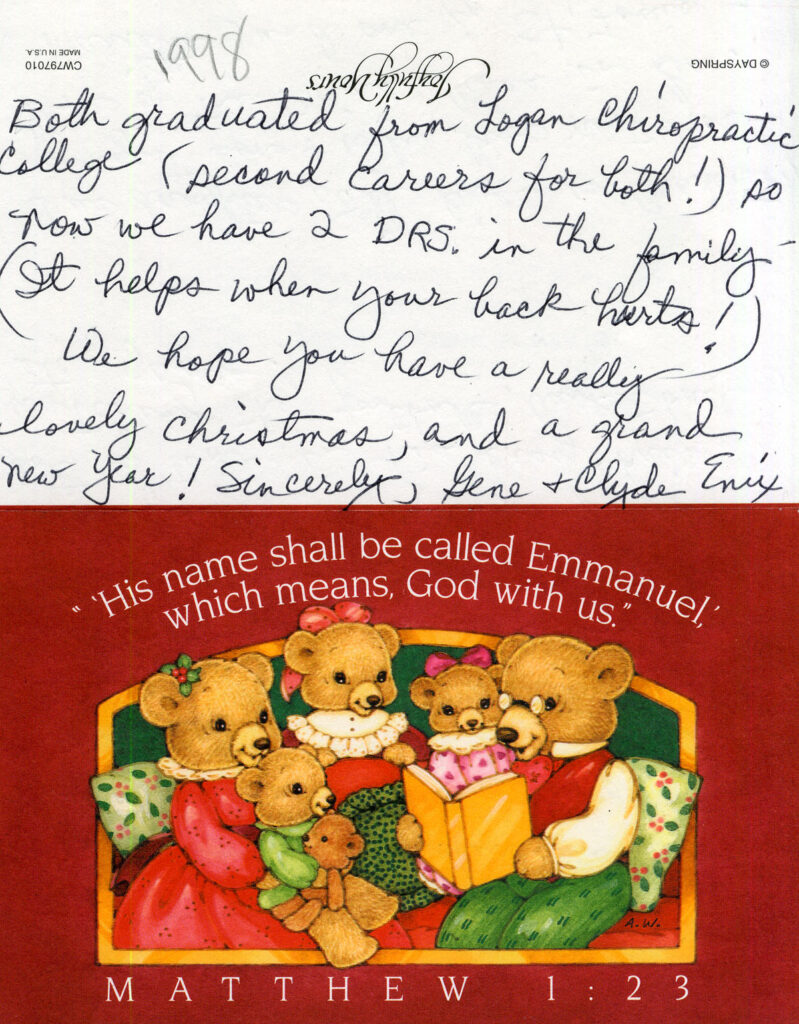 During the late 1940s, Clyde Edward Enix and his brother Willard, former PMSS students, undertook an extraordinary mission. After returning from their service in the Merchant Marines during World War II, they embarked on a heartfelt endeavor to gather all seven Enix siblings, now grown up and spread across the country, to live together in one place again.

The Enix Family story is a remarkable one in itself. The family was living in Harlan, Kentucky, when Clyde’s mother, Lula Elma (Cole) Enix, died at the age of 33 in March 1934, immediately following the birth of her seventh child, Bobby. Keeping the family together became too great a struggle for the father, Ed Enix, whose occupation was selling vegetables and fish to townsfolk, even with the assistance of Lula’s parents, Benjamin Franklin Cole and Sophia Kansas (Dunaway) Cole, and her sister Lillie Mae Cole.

Alta and Polly were sent to an orphanage and Clyde, Willard, and Janette stayed with their father until he died unexpectedly. Grandmother Cole then gained legal custody of all the children and worked on putting the older ones in good schools. The three oldest children went to Pine Mountain Settlement School: Clyde (age 13?), the oldest, arrived at the School in 1935, and Janette (10?) and Willard (8) followed a year later. Janette was at PMSS only a year, then was accepted at Red Bird Settlement School in Bell County, Kentucky. In 1936, Alta and Polly were sent to the Grace Nettleton Home in Harrogate, Tennessee, (joining Ruth Shuler and Charlsie Vaughn who eventually attended PMSS). Later, Alta and Polly received scholarships to attend high school at the Harrison-Chilhowee Baptist Academy (now, The Kings Academy) in Tennessee.

Over time, the care of the two youngest children, Carol Jean (age 2) and the baby, Robert (Bobby), was taken over by Ernest and Mollie Moore, an aunt and uncle in Arizona. Years later, the children were sent back to live with Polly and her husband, Linton Tibbetts, when the aunt became ill.

Although the Enix children were separated and moved from place to place, they remained devoted to each other, keeping in touch throughout the years.

Clyde and his brother Willard thrived as students at Pine Mountain, graduating in 1942. Both worked in the printshop with instructors August Angel and Fred Burkhard. Clyde continued to stay in touch with Fred and his wife, Esther Burkhard, all his life, sending cards and calling them on the phone. In later years, Esther took notes as Clyde reminisced about his life. Esther recently donated her notes and other papers and photographs to the Pine Mountain Settlement School Archive. The information she provided forms part of the text of the brothers’ biographies on the PMSS Archives website.

In one of his phone conversations with Mrs. Burkhard, in December 1996, Clyde recalled a project that he worked on under Fred Burkhard: a biography of Mary Rockwell Hook, who was the architect for several of PMSS’s buildings. He handset the type and made a frame for the document in the woodworking shop, then hung it in Open House. When Mrs. Hook stayed in Open House during a visit, she admired the framed story about herself and asked, “What can I do for you?” Responding that he would like to work off-campus, she asked, “Would you come to my home and be a ‘busboy’?” He agreed and joined Esther in her drive back to the Hook home in Kansas City.

Clyde continues to do very well. [He’s] working in the garden today with another man who can tell him which are weeds & which are flowers. He can wait upon table nicely & seems happy. He looks fatter & brighter. He enjoys our pond but it has been too cold lately to swim.

Mr. Dodd responded that he was “glad that Clyde is getting along so well. He should have a glorious time there at Hook House. It will be quite an achievement if Clyde stays there all summer and does well, and a great credit to you.”

Clyde and Willard were able to take their printing skills on to Berea (KY) College where they worked in Berea’s print shop.

While attending Berea Academy, Clyde studied American and European history under Dr. Elisabeth Peck, who had a PH.D. in Russian History and Music and was head of Enix’s dormitory. He recalls that every few weeks after church she would invite her students to the living room for a concert presented by several student cellists.

One of Clyde’s friends was the son of the Dean of the Academy, C.N. Shutt. One summer they traveled together to Phoenix, Arizona, and old Mexico. At Berea College, he continued his friendship with two students from Pine Mountain, Mattie Ayers and Lucille Christian.

Following World War II, the two brothers were able to find good jobs in publishing and printing, using the skills they learned at the Pine Mountain and Berea schools. They were not only able to pay for the education of many of their siblings but also encouraged them to move to Florida.

In Florida, Clyde worked as a Linotype setter for The St. Petersburg Times and, with the supplemental income of Willard, the two rented a large furnished home and set about reuniting the family. By 1946 all the siblings were either sharing the St. Petersburg house or living nearby. As time went by, they settled down in the Tampa Bay area, including Clyde, who in 1955 married Gene, a co-worker at the newspaper.

A letter dated February 24, 1982, to Mrs. Burkhard from Clyde’s sister, Polly, states that Clyde “left the printing business and bought a dairy farm [Enix & Sons] which he had for several years [late 1950s – 1970s]. He has now retired [from] printing and has a printshop in Port Richey [Florida]. All his children are grown and on their own. Son Mark works with Clyde now.”

On Christmas Day 1981, Clyde’s sister, Pauline (Polly) Enix Tibbetts, (1826-2016) was preparing to host the annual reunion of the Enixes at her home on Tampa Bay, an extended family that numbered in the 50s by then. As she prepared food for the guests, she was interviewed by Corinne Taylor Gregory, a lifelong friend who was the director of the Grace Nettleton Home during Polly’s time there. The interview was transcribed in an article about the family titled “Christmas at Polly’s,” published in the November/December 1982 issue of Back Home In Kentucky. In addition to Esther Burkhart’s notes, Polly’s narrative was also the source of many of the details that appear on the PMSS website pages for the Enix family.

Clyde and his wife, Gene Elizabeth Enix, had a daughter, Nancy, and four sons, Mark, Daniel, and twins Dale and Dennis.