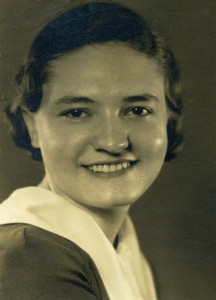 As a major in early childhood development at Antioch College in Yellow Springs, Ohio, Esther Weller (Burkhard) enjoyed working with children in various orphanages, children’s homes, and schools in Ohio and New York as part of Antioch’s work-study program. By the time she was hired by Pine Mountain Settlement School she was well-equipped to serve as Boy’s House housemother, Little School teacher in 1936, and teacher and counselor from 1937 through 1940. Her daughter, Elanor Burkhard Brawner remembers,

[S]he taught all 8 grades one year and it was pretty overwhelming. She counseled her students to be proud of where they came from, no matter how poor their home was. [During one lesson], she took her little students into the Chapel when the organ was being installed and had them blow into the pipes to hear the different sounds.

During Esther’s application procedures for PMSS employment, the PMSS Director Glyn Morris wrote to her at Antioch College, on June 5, 1936. He described the current status of the Little School, stating that Harlan County had been contributing towards the salary of the Little School teacher. He was waiting to hear from the County Superintendent whether the contributions would continue. If not, the School would have to secure a volunteer worker. In his letter, Morris also explained the nature of the Little School:

The Little School is primarily for a few of the local children who live too far away from the county school to make it convenient for them to attend…..Then too, the Little School takes care of a few of the children from our boarding school who cannot carry the work in the upper departments. It is highly individualized work and requires a good deal of resourcefulness and initiative.

[See image #009 and full transcription of this letter on the page for Esther Weller Burkhard Correspondence. Read more about the history of Little School here.]

Morris must have been impressed enough with Esther’s application and references to sense that she could handle the job. The Staff Directory 1913-present indicates that Esther was involved with Little School in 1936, but whether she did so as a volunteer (who would have been paid a stipend of $10 a month) or salaried worker is not known.

According to Esther’s daughter, Esther had her own car on campus. Consequently, Mr. Morris often asked Esther to meet the train in Harlan to pick up visitors. It is possible that Esther met her future husband, Fred J. Burkhard, on one of those trips. He came to the School to work as printing instructor one year after Esther had arrived at Pine Mountain. They eventually married and had two children, Elanor L. and John P. Burkhard. Elanor, born in 1940, was the first child of the boarding school faculty to be born in the School’s Infirmary, 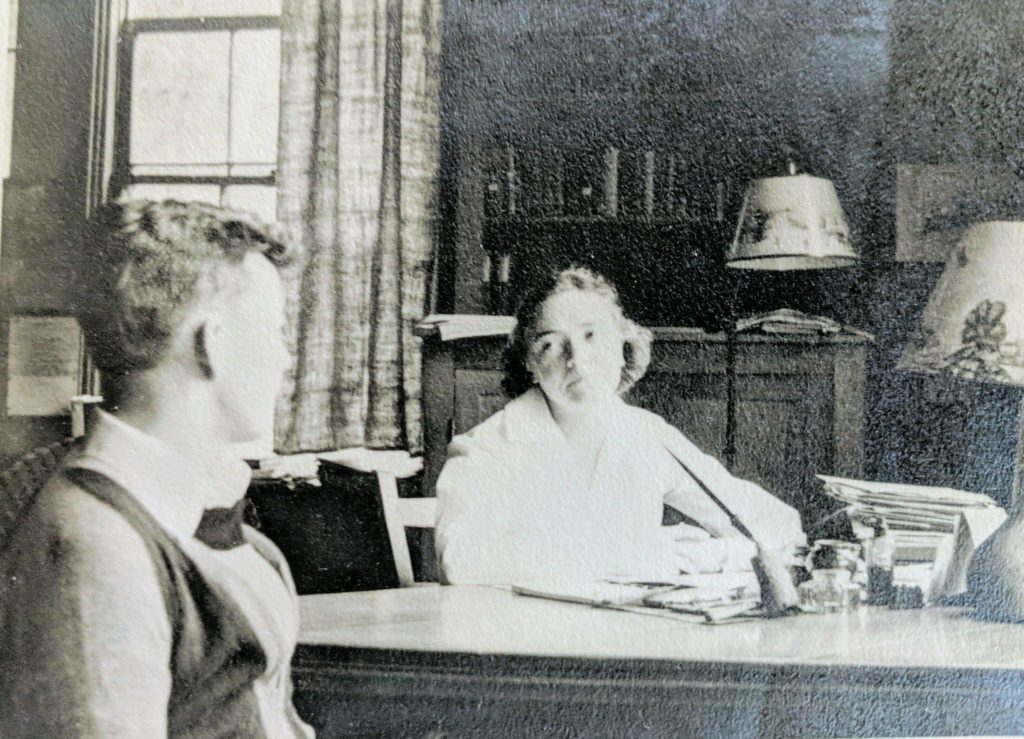 By 1947 Fred and Esther were living in Liberty, KY, and running The Casey County News, a local newspaper that is still in operation today. Esther worked alongside Fred as business manager in their newspaper’s office for 28 years, all the while serving the community in many ways. Esther was a member of AAUW, PTA, and Beacon Book Club, Cub Scout den mother, treasurer of Little People’s Day Care, served as secretary of area homemakers and was a 4-H Club leader. After retirement, she taught piano lessons in her home. She loved to travel, grow flowers, make juice and jelly, and study birds and wildflowers. She was the head genealogist for all sides of the family.

See also: Guide to the Esther and Fred Burkhard Collection

Esther Eugenia Weller Burkhard, 101, died Saturday, Aug. 9, 2014, at Liberty Care Center in Liberty. Born Dec. 7, 1912, in Saint Joseph, Mo., she was predeceased by her parents, Philip P. and Hattie Williams Weller of Saint Joseph; and her husband, Fred J. Burkhard. Also preceding her in death were her sister, Eleanor Jackson; and a brother, Philip Sydney Weller.

Esther worked alongside Fred as business manager in their Casey County News office for 28 years. She loved the people of Casey County and was pleased to make it her home since moving here in 1947. She grew up in Saint Joseph, attended the local junior college, transferred to Antioch College in Yellow Springs, Ohio, majoring in early childhood development. She enjoyed working with children in the various orphanages, children’s homes, and schools in Ohio and New York as part of Antioch’s work-study program. She was hired at Pine Mountain Settlement School in Harlan County, Ky. and served as teacher, counselor, admissions director and housemother. Fred was hired as printing instructor. They married and had the first child of the boarding school faculty.

Esther was a member of AAUW, PTA, and Beacon Book Club, Cub Scout den mother, treasurer of Little People’s Day Care, served as secretary of area homemakers, and was a 4-H Club leader. After retirement, she taught piano lessons in her home. She loved to travel, grow flowers, make juice and jelly, and study birds and wildflowers. She was the head genealogist for all sides of the family. She was crazy about the Space Program.

She is survived by her children, Elanor Burkhard Brawner (Larry) of Elizabethtown and John P. Burkhard (Trudy) of Lexington; four beloved grandchildren, Neal F. Brawner of Jacksonville, Fla., Rebecca Burkhard Ratliff (Jonathan) of Louisville, Beth Anne Brawner Ahlhaus (Paul) of Shepherdsville, and Julie Burkhard Fritts (Jonathan) of Bethesda, Md.; four great-grandchildren, Ellie and Bennett Ratliff, and Maya and Hannah Fritts. Expressions of sympathy can be in the form of donations to Mt. Pleasant Church…. The funeral will be at 11 a.m. on Friday, Aug. 15 at McKinney-Brown Funeral Home in Liberty with Rev. Paul Patton officiating. Following the services, there will be a Celebration of Life Songfest at Mt. Pleasant Church on Ky. 70 West after the burial there. Visitation is from 6 to 9 p.m. on Thursday, Aug. 14. Pallbearers will be Paul Ahlhaus, Neal Brawner, Larry Griffin, Kevin Land, Marion Murphy and Dale Sellers. – See more at: http://www.legacy.com/obituaries/caseynews/obituary.aspx?n=esther-burkhard&pid=172096566&fhid=16685#sthash.9ewPUPyJ.9knLpNH5.dpuf