FRED J. BURKHARD INDIAN ARTIFACT COLLECTION consists of artifacts collected and purchased by Burkhard and PMSS staff. Gathered during the period of 1937 to his death, the Native American items were found in the Pine Mountain area and largely in and near Liberty, Kentucky, where Fred served as the publisher and editor of the Casey County News in the 1940s and 1950s.

Fred J. Burkhard was Print Shop operator and teacher from 1937 to 1940 at the Pine Mountain Settlement School (PMSS).

The collection was brought to PMSS by Allen G. Sparr of Liberty, Kentucky, in 1987 and 1988, accompanied by the following narrative which was written by Sparr. According to Elanor Burkhard Brawner (Fred J. Burkhard’s daughter), Sparr was “one of Mom and Dad’s young friends from the ridge [Liberty, KY]. His father worked on the Texas Gulf pipeline across the ridge north. They built a little house at the top of Bell Hill, but it burned down. Dad sold them a parcel off our land for a stone house and small yard. It’s bordered on the back by our field. The wife is 96 now. Allen [was] a smart feller and was very interested in all things Fred Burkhard and especially his arrowheads. He personally delivered some nice sets of them to PMSS where they hang today” next to the William Hayes Native American Collection.

Sparr describes the contents of four glass cases containing a portion of the original Burkhard Collection — arrowheads, points, flint, bows and arrows, weapons and stone implements — now on display in the Library (Boys’ House) on the PMSS campus. 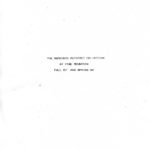 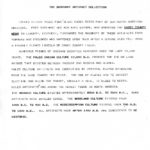 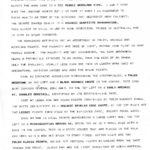 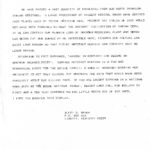 Locked within these four glass cases rests part of our North American Heritage. Fred Burkhard and his wife Esther, who operated the Casey County News in Liberty, Kentucky, purchased the majority of these artifacts from farmers and children who happened upon them after a spring rain fell upon a freshly plowed Lincoln or Casey County field.

Numerous tribes of Indians occupied Kentucky over the last 12,000 years. The Paleo-Indian Culture 12, 000 B.C., crossed the ice or land bridge that existed between present-day Russia and Alaska.

Paleo culture artifacts are identified by vertical flutes extending from the base toward the point. The use of flutes was to inhibit clotting and allow the target, usually a meal, to bleed to death. Paleo artifacts are among the rarest found in North America.

These artifacts represent only a small percentage of those purchased over a forty-year period, due to their unsolved theft. Case #1 contains a large circular object. It is theorized the Indians rolled this stone and threw spears at it to settle tribal disputes. Within the same case is a red Middle Woodland Pipe. I don’t know what the Indians smoked but I am sure it wasn’t as hazardous to their health as some of the diseases that destroyed many cultures. The square-shaped object is an Archaic quartzite bannerstone. This device is still in use by some aboriginal tribes in Australia, and it aids in spear throwing.

The remaining artifacts are an assortment of Paleo, Archaic and Woodland points. The majority are made of chert, rather than flint as many people assume. The majority are not arrowheads. The term arrowhead means a projectile attached to an arrow, thus the head of an arrow. Only the smallest, usually less than one inch in length, were used as arrowheads. Anything larger was used for spear points.

Case #2 contains arrowheads surrounding the centerpieces, a Paleo redstone on the left and a black Archaic knife in the center. This case also contains several bone awls. On the top left is an early Archaic St. Charles dovetail, identified by its dovetail-like base.

Case #4 has 12 drill points surrounding a large chert hoe. The top left is a Mississippian grooved ax. Below the ax is a small disc with a hole in the center. This is a stick holder that was placed in the palm and used with a bow and stick to start fires. Bottom right are two Paleo Clovis points. Notice the vertical flutes extending from the base toward the point. Clovis man was the first inhabitant of North America. Above the two Clovis points are several Archaic side notch points.

We have gained a vast quantity of knowledge from our North American Indian heritage. A large percentage of present medical drugs were derived from plants used by tribal medicine men. Present-day yields of corn would not have been possible without the Indians’ cultivation of Indian corn. If we can contain our planet’s loss of unknown medicinal plant and herbs now being cut and burned at an incredible rate, perhaps our culture can exist long enough so that future artifact hunters can identify what we leave behind.

According to Fred Burkhard, “Anyone in Kentucky can become an amateur archaeologist.” Surface artifact hunting is a fun and economical hobby for the entire family. A word of warning — digging for artifacts is not only illegal but destroys the data that would have been available about our distant past. If you are caught digging in a National Park, such as the Boone National Forest, recent laws call for $50,000 in fines and a ten-year sentence making little rocks out of big ones.

I hope you enjoyed this display.