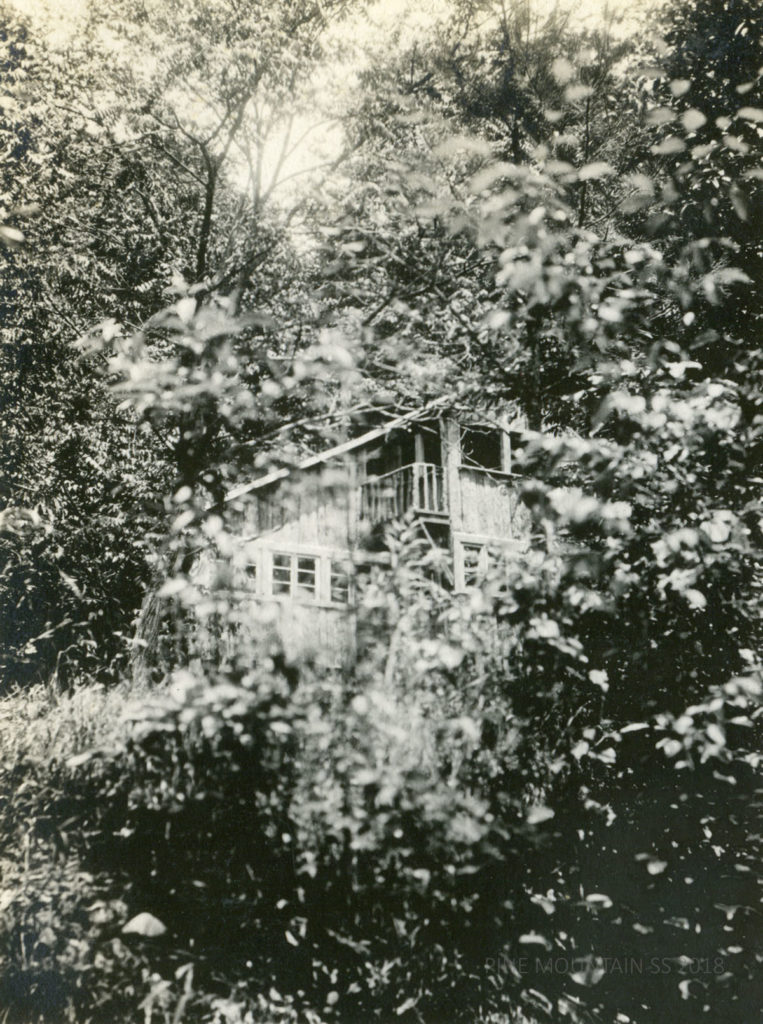 [Note: Letters from PMSS staff in the PMSS Collections are carbon copies, typewritten, unsigned, and meant for the Office files. The original signed copies were sent to the correspondents. The initials at the bottom left of most PMSS letters indicate the writer (along with initials of the secretary). For example, “EZ” are the initials for Ethel de Long Zande and “KP” refers to Katherine Pettit.]

001 February 1, 1927. To “Mary” from (truncated, likely Ethel de Long Zande), who is proud that Mary is on the Art Commission; Zande hopes to stop by in Kansas City, en route to Colorado, to see her houses. Writes about her health, Dr. Pickett, Antoinette Bigelow. Asks if Mary and Dick will attend the spring board meeting, when there may be a dogwood breakfast. She is weaving curtain material for Mrs. Ostertag.

002 April 19, 1927. To “Mary Rockwell” (Mrs. Inghram Hook) in Kansas City, Missouri, from KP (Katherine Pettit), who tells her that Open House is ready for her spring visit; looks forward to seeing Mary’s two boys and Mrs. (Ruth) White. Big Log won’t be able to take Mary’s son because there are no housemothers in the summer. Describes her housecleaning schedule. Suggests bringing Ethel McCullough.

003 May 23, 1927. To “Mrs. Zande” from Inghram D. Hook typewritten on his law office stationery, Kansas City, Mo. Asks about Eugene’s grades and tuition needs. “Outside of what he can earn, we would like to contribute a dollar a day for his instruction in the art of labor.” He also encloses payment for boarding the family of four.

004 June 6, 1927. To “Mary” from EZ (Zande), who recently “motored” with Berto and Miss (Abby) Christensen to South Carolina. Thanks Mary and her husband for the check. Reports on Eugene’s progress; “He is a pleasant little boy…and it is the greatest pleasure for us all to help you in any way.”

005-005a June 15, 1927. Two-sided letter to “Mary” from EZ (Zande), who goes over arrangements for Eugene’s travel; hopes Mary finds him a good school, since he is too young for PMSS where the age limit is 14; EZ provides suggestions for schools in Lenox and Connecticut. Comments on the shoes that arrived; the “Model Home” package that Mary sent; Mary Work, a teacher. She thanks Mary for her opinion of Antioch.

006-006b June 21, (no year). Handwritten three-page letter to “Ethel” from “Mary,” who appreciates Ethel’s observations of Eugene. “I am so anxious to make something of him if it can be done.” Suggests his itinerary for returning to Kansas City. Mary has enrolled him in (?)port Junior High for next year.

007 June 20, 1927. To “Mrs. Zande” from Ingham D. Hook typewritten on his law office stationary. Eugene can stay at PMSS if ”he is making some real progress in acquiring industrious habits.” Encloses a check for Eugene’s board for June and for his travel to Kansas City; suggests Eugene’s itinerary. “We appreciate everything you have done for him and sincerely trust that his sojourn with you has done him some good. …”

008 June 23, 1927. To “Mr. [Inghram D.] Hook” in Kansas City, Mo., from EZ (Zande), confirming receipt of his check and assuring him that the tuition and board payment is satisfactory. The School cannot keep Eugene after July 1st, since the Zandes will be away during the month. More about Eugene’s itinerary: Zande will ask Miss Ingram, head of Neighborhood House, to help Eugene in Louisville and ask Mrs. White to meet him in St. Louis.

009 June 23, 1927. To Miss Frances Ingram, Neighborhood House, Louisville, Ky., from EZ (Zande), explaining that Miss Mary Rockwell, “one of our board members who has sometimes stayed at Neighborhood House” is now “Mrs. Hook” of Kansas City. Mary has a little 11-year-old boy, Eugene, who spent some weeks at PMSS and is now returning home. She asks if someone “from Neighborhood House could look out for him if he should miss his connection for St. Louis to Louisville.”

010 June 23, 1927. To “Friends” at Travellers’ Aid, Union Station, Louisville, Ky, from EZ. Explains that Eugene Hook will be traveling through and asks about train connections; asks that they telephone Miss Frances Ingram if he needs help. “Eugene is eleven and used to cities and travel, and indeed he is so self-confident that he may feel he can do more by himself than he ought to.”

011 June 24, 1927. To Mr. L.D. Smith, Agent, Putney, Ky., from EZ (Zande), thanking him for information about the new train service. Explains that Eugene Hook will be traveling to St. Louis and asks that the agent have a ticket ready and to reserve an upper berth on the sleeper to Louisville for Eugene.

013 June 27, 1927. To “Pullman Conductor, Louisville Sleeper” from Ethel Zande, asking him to “look after Eugene Hook who is travelling alone to Louisville…,” bound for St. Louis.

014 N.D. To “Miss Key” from Ethel Zande, explaining that the agent will have a half-fare ticket through to St. Louis for Eugene and an upper berth reserved. She asks that Key give this note to the brakeman or conductor and telegraph Travellers’ Aid. Encloses cash and a check.

015 July 2, 1927. To “Mary” (Mrs. I.D. Hook, Kansas City, Mo.) from EZ (Zande), who is anxious to hear about Eugene’s trip. She won’t be using the red sateen Mary sent for the church, choosing another texture instead. Mabel Ely, who is visiting PMSS, will find another material in New York when she leaves.

016 July 18, 1927. To “Mary” from (truncated, likely EZ). Mentions Bertha and Juliana; “the shop for the boys”; Mary Work’s upcoming marriage to an English (born) professor. She encloses the official statement that Hook had requested, to be signed and returned. Describes Luigi’s (Luigi Zande) evaluation of Eugene. She writes about teaching Berto “faithfulness to jobs. … After considerable talk with Mr. Hanchett this summer, and some of the problems they meet in Antioch students who have brilliant minds but are undisciplined as to will, I feel more strongly than ever that this matter of getting a young person subdued to an idea of work and straightforwardness is vitally important.”

017-017c July 20, 1927. To (no salutation) from EZ (Zande) on PMSS stationery. [017-017a] The fire insurance statement will be sent to Hook when it is properly signed. (Handwritten notation by Hook, instructing EZ to send it to R.(?) T. Cameron, who will be staying with the boys while the Hooks are away. Provides her addresses while traveling. [017b] Hook encloses a check for the insurance paid on Open House by the School. Asks for a “statement made out by the School….I (added an) extra $300 made out in my name, Ethel’s, and Muggin’s. Please state that the house stands on one acre given to me for my lifetime — to revert to School on my death.” [017c] List of costs of shoes from Robison Shoe Co., spoons(?), and the red material.

018 September 12, 1927. To “Mary” from (truncated, likely EZ), who is writing to Hook in Assisi, Italy. She is sending Hook the signed fire insurance statement. “Miss Pettit was unwilling to sign until she had asked Marguerite Butler about it.” Zande was told by Baltimore doctors that she no longer needs radium treatment. Tells about Luigi’s current attitude towards living at PMSS. The School now has a lawn mower; she attended Denver Begley’s funeralizing.

019 October 20, 1927. To “Mary Hook” from KP (Katherine Pettit), who commends Hook on an article in the Kansas City paper about her houses. Encloses a notice to guests at Open House for her review; hopes that “Miss Hook” will visit sometime; would like to know Hook’s opinion of the “meetings of the Legion.”

020 December 27, 1927. To “My dear Mary Rockwell” from KP (Pettit). Former PMSS students at Berea (KY) College raised money to send to PMSS as a Christmas present. Pettit asks Hook if the donation ($2.30) could be spent on “a bell of some kind that could be attached to the wall at Laurel House and used for making announcements in the dining room.” Pettit asks Hook if one of her interior decorating friends knows where to find one. “It is our first gift from former students, made collectively!” 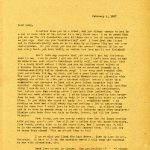 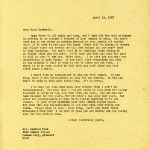 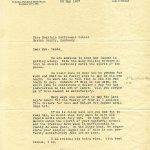 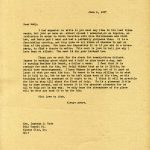 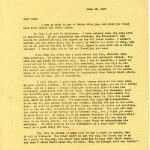 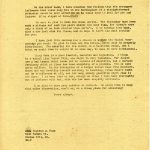 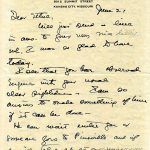 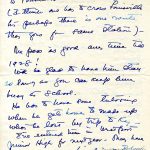 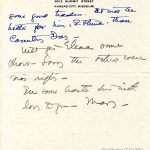 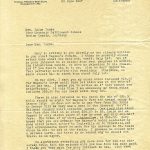 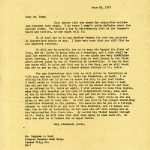 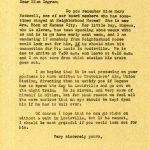 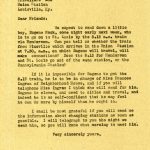 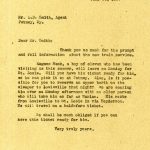 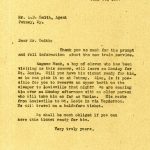 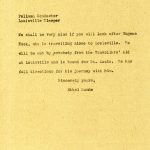 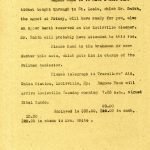 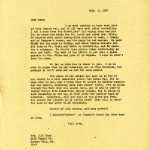 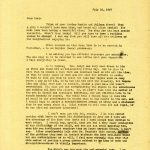 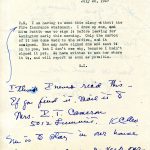 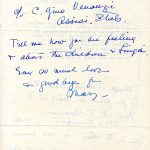 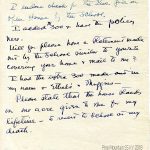 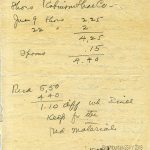 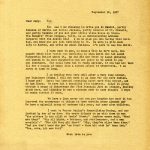 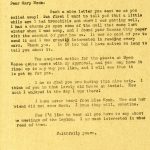 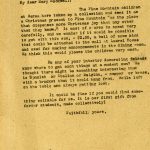