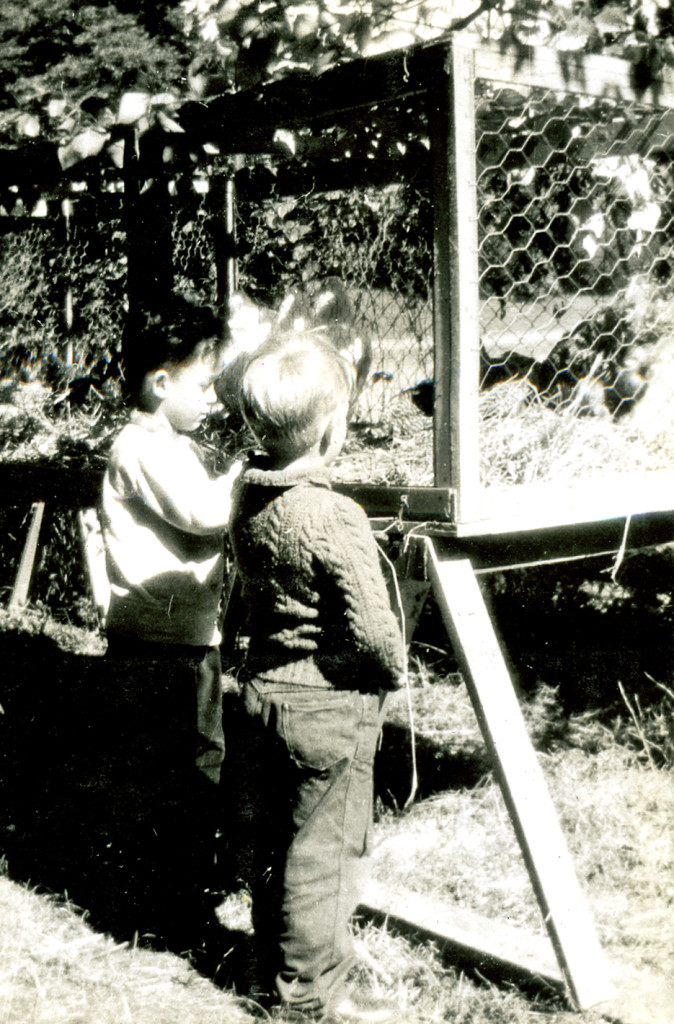 “The sun is a–shining to welcome
the day, with a heigh-ho, come
to the Fair.”

Fair Day anywhere is likely to be a gay time, but at Pine Mountain, it is one of the rare occasions, along with the spring “graveyard meeting,” the occasional “working,” and the fall stir-off, when widely separated families come and enjoy each other’s company. It always begins, and did this year, with a protracted and delightful program of “norating.” With no newspaper to send the news, we did it on foot and by grapevine, down Greasy Creek, and Big and Little Laurel, Turkey Fork, Isaac’s Creek, and to far away Line Fork and Bear Branch, and lonely Puncheon holler, until every oldest and least one had word of the Fair.

While this business of publicizing was going on, equally busy preparation was taking place on the school grounds. A platform was built on the playground, Dr. Keith from Eastern State Teachers’ College was secured for speaker, the largest hog and beef in the neighborhood were bought for slaughter, and the workers and students were initiated into the mysteries of “pit barbecue.” All day before the Fair the tantalizing smell crept down the valley. That night men and boys like druid priests poked the coals, and turned the meat,  preparing the sacrifice. Everywhere down the creeks and up the hollows the women were polishing their jars of fruit, domestic beasts were no doubt led by the practicing for the chicken and sheep calling contest, and on the school grounds there echoed from Big Log to Far House the old familiar song of the Fair.

The flower table was lovely with Arwilla Lewis’ famous dahlias—a special triumph because the whole countryside had been debating on whether or not the frost would hold off long enough to leave them for the Fair. On the vegetable table we noted with interest Henry Lewis’ turnips which many of us had been watching for days as they swelled like balloons. This year’s great red apples will probably not appear at our Fair soon again, because a bumper apple crop is very rare in our area. On the canned goods shelf perfect glasses of jelly stood in front of shining cans of beans and peaches, the jelly so clear that one could see the beans shining through.

The exhibit of old-fashioned household gear is one of the most unique features. There was, for instance, the comforter, madder red on one side, black-sheep brown on the other, bound with indigo piping, made by Aunt Sal’s mother. The same patient hand had fed and shorn, carded and spun and dyed, woven the cloth, and spread out the neat quilting in great even fans of small hand-stitches. (The comforter belongs to Dr. Oma Creech, a grand-daughter of Uncle William, now overseas with UNRRA.)

The iron pot on its tripod, Uncle William [Creech]’s gun, the bed that Uncle John Dixon Shell made for Aunt Sal [Sally Dixon Creech] when they were married, maybe eighty years ago, the powder horn and the coffee pot, each tells its homely story of hard old days. Certainly, the Bible from Gib Lewis’s home, with its marriage and birth record from the early part of the last century, could tell us more than the printed “Word.”

By noon the barbecue was practically done. It was the first in our neighborhood, and everyone had to have a taste. When along with that, the coffee and ice cream were also devoured, the crowd gathered at the platform and the program began. The very fitting patriotic talk of the speaker was followed by a hog calling contest, won hand over by Jim Browning from Little Laurel. We half expected to see all the hogs on Little Laurel come tearing over the mountain in answer to his call which shook the valley. Abner Boggs sang “Lolly Toodum Day,” (for without that song, and Abner, we could hardly call it a Fair), and then the children from district schools sang their songs and there was a dramatization of the “Old Woman” ballad.

With the last verse of the song the rain which had been wanting to come earlier, began to fall. There was a mad scurrying, the crowd melted like magic, and in ever so short a time they had all disappeared down their different creeks.

Abner Boggs, the ballad singer gave us, in the dignified Biblical style characteristic of his speech, this gracious comment on the Fair:

“Hit’s always right and good for men folks and womenfolks to have conversation one with another. On this day they were things to eat and folks to eat ‘em. They were interestin’ things to look at and folks looked. They were a fine educated man to speak, and I reckon most folks got some benefit out of hit. Them that done the best in any manner of means such as callin’ a hog or raising a turnip got notice took of hit. They weren’t no discord nor willful killin’ and shootin’ to interrupt.  Hit were a good Fair.”  . . .

In a letter dated October 2, 1944, to former PMSS students, Miss Marie Williams and Miss Patricia Hall at Wheaton College, Director H.R.S. Benjamin wrote,  “All of us are busy with plans for Fair Day this Saturday. We hope to have a real old-fashioned fair with all the ‘fixins’.”

Fair Day returned to its original pattern of exhibits, ballad singing, a softball game, and a movie. Former teacher John Spelman III visited 10 days, including Fair Day…. The success of the Fair Day barbecue led students and workers to contribute money to purchase a pig for barbecue before the traditional Halloween party.