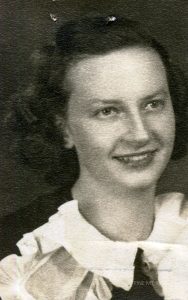 Louise Fliermans came to work at Pine Mountain Settlement School as a teacher and dietician in 1947. Recently widowed when she lost her husband of two years in WWII, her association with Pine Mountain was part of a difficult journey taken by many war widows. Pine Mountain became a place of healing and of growth for the determined new teacher. Her association with the settlement school became a long and affectionate one. Her correspondence stretches from the date of her application for a position at the School in 1947 until 1964, when she was last in contact with Burton Rogers, then PMSS Director.

Marguerite Louise Richards Fliermans (her full name), was born in Illinois on March 19, 1921, and grew up in the Olivet, Illinois, community. She and her husband had a child prior to her husband’s death and now she was a single parent. The son, Carl Barnard Fliermans, was a toddler when she made application to teach at Pine Mountain. Her father, a businessman, and the rest of her family were supportive but Louise was insistent on maintaining her independence and self-sufficiency. Even so, several members of her family — her son, her father, her mother and a younger sister — accompanied Louise when she came to Pine Mountain on an exploratory trip in August 1947.

She was hired to teach home economics and to serve as the School’s dietician beginning in the Fall of 1947. She, and her young son, Carl B., started a long association with Pine Mountain Settlement School and the many friends they made while living there.

During her brief years with her husband, Louise was a homemaker. Following her husband’s death during WWII she became fiercely independent. Refusing assistance from her parents she and her young son made their own way. She went back to school to continue preparation for a teaching career that would support her and Carl B. She chose to attend the University of Illinois in Champaign, Illinois, a location close to family, where she pursued and completed her teaching requirements. Using her skills as a homemaker, she devised a plan that would bring in income while she attended school. She rented a house near the school, refurbished it and took in boarders which paid for the rent as well as her school expenses. She was highly organized, a trait that followed her for her lifetime. Her competence and Pine Mountain’s needs were a good match.

One of her instructors said of her that

One cannot help but admire Mrs. Fliermans for so bravely facing her problems with a smile — never complaining or offering excuses. Her scholastic standing is slightly better than average, but her personality traits are superior.

In February of 1947, Louise received her B.S. degree from the University of Illinois and completed her practice teaching. She arrived at Pine Mountain to work on February 1, 1947. The settlement school position was her first full-time teaching assignment. She was 26 years old.

She learned of the Pine Mountain Settlement School in Harlan County through association with the Wesley Foundation in Urbana, Illinois, where she was finishing her teacher’s training. A Dr. Burt of the Wesley Foundation told her of the opening. Mrs. Cullen Owens [Janet Owens], also associated with the Wesley Foundation and who had visited the School, described its mission to Mrs. Fliermans who became very interested in the School’s unique objectives. One attraction as described by Louise was due to her heritage — her mother who had been born in Kentucky and her family of farmers who had nurtured her in a rural and farming environment.

Regarding her son, Carl, who was 3 1/2 years old at the time, she noted that his care by the girls at the School could serve as “an experience in child development and guidance.” She came with high recommendations. One reference, Elizabeth Lawson, Dean of Women at Eastern Illinois College, in Charleston, described her as a “splendid young woman of fine character and high standards. She has much to give the students.” A personal letter was written to Arthur W. Dodd, the current Principal of PMSS, from Janet Owens who lauded her skills and temperament.

…Cullen and I think she’d be a real “find” for the job…. if there’s work to be done at school (Louise helped with the local kindergarten class) she always is willing to do more than her share despite her own heavy responsibilities … she is absolutely dependable and the kind of a person the girls would be willing and happy to work with.

In this recommendation, Janet Owens makes a common assumption that home economics is only for girls. Louise Fliermans trained under what was referred to as the Smith-Hughes Act training principles. The Smith-Hughes Act was formerly part of the National Vocational Education Act which was adopted in 1917 and that provided federal support to states that promoted pre-collegiate vocational education in the areas of agriculture, industrial arts and home economics. The Act later came under stiff criticism for differentiating the secondary-education curriculum and also for encouraging class, race, gender and other inequalities through vocational educational programs. At Pine Mountain, the Smith-Hughes Act was under a more progressive interpretation and courses in home economics were shared with both sexes and auto-mechanics and woodworking were not just male offerings at the School, as seen below.

Following the visit to Pine Mountain by Mrs. Flierman, Carl B. and her parents prior to her graduation from the University of Illinois, she was very pleased with what she saw and Pine Mountain was pleased with her. She was enthusiastically endorsed for employment at the School by the Board of Trustees in late November 1946 and scheduled to begin her duties the first week in February 1947, following her graduation.

On arrival, she was first housed in Boy’s House in the workers’ quarters, where she and her son joined the student housemother, Miss Josephine Merrill. While the small rooms were cramped, the meals were shared with other staff at the Laurel House dining room where she served as a dietician. Like so many staff at the School, she and Carl B. were then shifted to various housing situations on the campus when the pressures on housing changed at the end of the boarding school years (1949).

In the classroom Louise was a much sought-after teacher and her skills in home economics was often sought out by the staff to address many questions regarding food, decorating, sewing, and other skills. 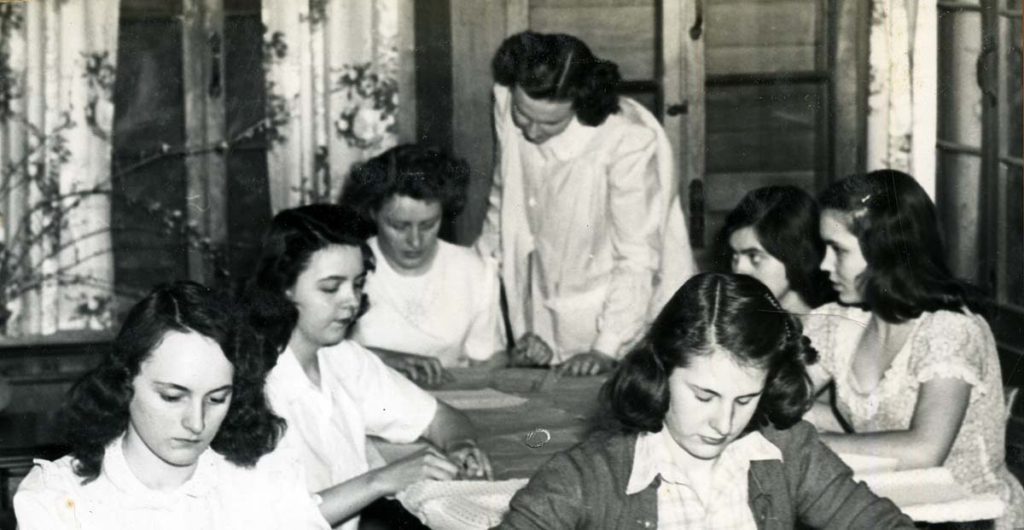 In correspondence with Pine Mountian, her son Carl B. Fliermans wrote fondly of the years he spent as a child at the School

It seems my roots have never gone far from PMSS since my mother, Louise Fliermans, taught Home Economics there in the late 40’s and early 50’s when I was a small lad. My memories of the Pine Mountain Settlement School in those days were enhanced by the Rogers’ [Christopher Rogers] and the Hayes’ boys [Steve Hayes] being my constant companions as we roamed and explored the Greasy Creek watershed. Our accommodations were in Boys House, as I believe it was called, along with some of the high school students. It was a memory making time.

In my mind, the school is a vibrant memory of chapel services, Yule logs, Mummers’ Plays, square dancing in the dining hall, and cornbread and milk suppers. Scrapbooks kept during those times are still part of our family. The joys of listening to Dick Chase tell stories from his “Grandfather Tales” and the fairy tales of Hans Christian Andersen are remembered with fondness. Those times of yesteryears are part of my makeup.

Carl B. grew up, received a Ph.D. from Indiana University in Microbiology, Limnology, and Ecology, and became one of the country’s leading scientists in that field of study. Following the outbreak of a mysterious disease, Carl B. and colleagues isolated the Legionnaire’s Disease bacterium as the cause of a severe illness in those who come in contact with the bacterium. His discovery led to his appointment as a special investigator for the CDC. Today, he serves on several boards, including Asbury College where, as an alum, he was recently honored for his “life of integrity and a career of monumental accomplishment. We stand in awe of a giant, tall among his peers as a research scientist. ” [To see a full tribute to Carl B. from Asbury College:   https://www.asbury.edu/alumni/alumni-office/alumni-awards/carl-fliermans

His mother taught him expertly as she did so many others. As one of the staff who experienced the transition from boarding school to community school when the boarding school closed in 1949, Louise weathered some difficult times and teaching environments and brought her wise counsel to the difficult transition. Her correspondence reflects her deep involvement in the turbulent educational transition. Yet, when Louise left Pine Mountain Settlement School in 1950, it was with sadness and to the regret of many students and staff.

Louise was also an elegant folk dancer, as were many on the staff at the School.  Dancing was both exercise as well as recreation. Folk dancing, a favorite activity at the School soon spread to other locations in the county. Here Louise is shown dancing with Weaver Smith at the Harlan County Country Club. 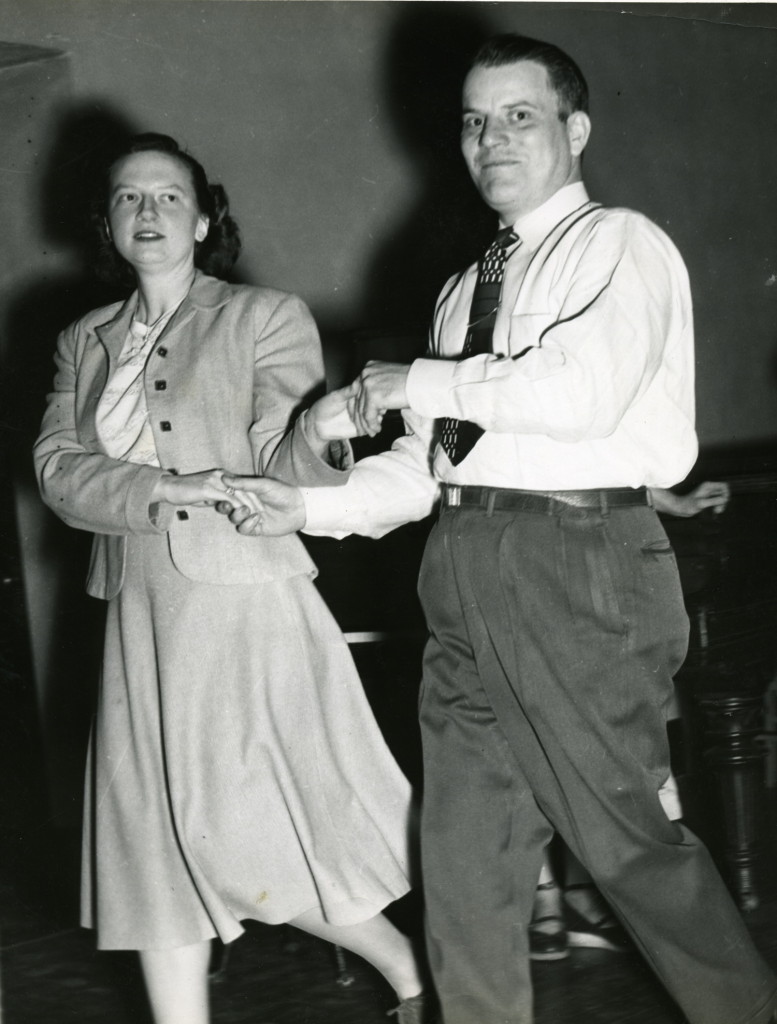 When Louise left the School in 1950, intent on securing a Master’s degree and a better salary, she did so reluctantly. She quickly accomplished her second educational goal and with her Master’s credential in hand, she found employment teaching in several secondary schools close by her family home in Danville, Illinois, the county seat of Vermilion County. There, she could more easily offer her son the education she desired for him. Eventually, she became Head of the Home Economics Department at Danville High School and a much-admired member of the local educational programs. In the community, she was an active member of the Vermilion County Chapter of the Daughters of the American Revolution and other civic and church organizations.

Upon her retirement, she returned to her beloved family farm in Georgetown, Illinois. It was there that she established the Carl Fliermans’ River Nature Preserve along the nearby Little Vermilion River for all to enjoy. It was, in many ways, her homage to her husband and to the memory of the natural setting of Pine Mountain.

Throughout her life, Louise Fliermans was masterful at juggling. Whether continuing a long commitment to teaching, filling in occasionally for vacationing or departing workers at Pine Mountain, working as a dietician, continuing her graduate school work, or maintaining a close vigilance of her son’s education, she was positive, sharing, and a superb role model. She continued her interest in helping Pine Mountain through material and monetary donations for her lifetime. It is interesting that in a virtual way [as part of the Archive of PMSS is now located there] both Louise and Carl B. have “returned” to Boy’s House where others may continue to be reminded of the woman who indeed had “superior personality traits.”

Marguerite Louise Richards Fliermans died on November 13, 2005, at the age of 84. She was buried at Cedar Memorial Park Cemetery, Cedar Rapids, Iowa. She had been living in Georgetown, Illinois, at the time of her death. She is survived by her son, Dr. Carl Bernard Fliermans (born c. 1943), and his wife, Ruth Ann (Horstman), of Augusta, Georgia, a sister, Sara Kay Frank, of Lancaster, Pennsylvania, four grandchildren and one great-grandchild.