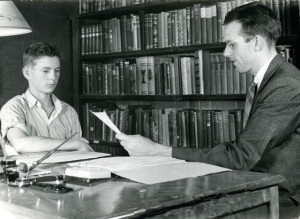 In the spring of 1940, Malcolm Arny, at age 27, had just graduated from college and was living with his parents in Montclair, New Jersey. Soon he found himself traveling to an entirely different world nestled in the Appalachian mountains of southeast Kentucky, where he had acquired a position with the Pine Mountain Settlement School.

According to Malcolm Arny’s daughter, Suzanne Arny Fullar, Arny had always told her that he first learned about Pine Mountain when the School’s dance troupe came to Montclair, NJ, Arny also heard of the School from Mrs. McCormack of the New York School of Social Work where he had just completed his graduate studies in social work. After reading a pamphlet titled “Community Service in the Curriculum,” written by Glyn Morris, he wrote the following to Morris, then the School’s director, in a letter dated May 24, 1940:

…I was impressed with the school’s progressive social outlook and the influence which this has had on your curriculum for the benefit of the mountain communities….Since my visit to your section of the country I have realized the great potentialities of the mountain people for self-progress and I admire their initiative in making use of their resources.

As in the past, their chief obstacle seems to be the geographic features of their country which hinder communication and retard social progress. It appears to me that the Pine Mountain School has taken a realistic approach toward the community’s needs in offering to students the opportunity of learning how to help themselves and their communities instead of holding strictly to a formal program of education which has relatively little value in meeting their immediate needs.

Arny enclosed a completed application form that described his interests in group work (discussion groups and group activities), Boy Scout activities, vocational and personal guidance, and the social sciences (history and politics). His education included graduating from Irving High School in Tarrytown, NY, in 1933 and from Union College, Schenectady, NY, with an A.B. in Social Studies in 1937. He then New York School of Social Work in NYC in 1940 but did not graduate. Throughout his six years at school, he had worked at various jobs: at summer camps, the Union College library, a fraternity house and as a clerk in four different businesses.

A June 1940 letter to Morris from one of Arny’s references, Dr. Charles Waldron, Secretary at Union College, provided an example of Arny’s primary interest:

He has had for years this keen desire to be of service to his fellow men…. He began by going about the country trying to know plain people and those at the very bottom of the economic ladder all over the land….It was not an adventure jaunt; it was a definite attempt to know at first hand plain people — their needs and their viewpoints.

By June 1940 Arny had paid a visit to Pine Mountain and was impressed with the School. He was hosted by Mr. John Spelman, an artist-in-residence at the School and Arny’s roommate during his visit, as well as by some of the students. In his followup letter to Morris, he wrote:

The students’ participation in acting as hosts to guests gives a stranger an intimate insight into the everyday life which otherwise would not be presented to him….I was most impressed by the spirit which pervaded the atmosphere of Pine Mountain. This spirit seemed to express itself not only in the enthusiasm of the leaders of Pine Mountain but it was also transmitted to the students in the form of a cooperative desire for the success and continued progress of the school. Among the many groups in various settings which I have had the experience of knowing I have rarely noticed a similar expression of happiness….

Although Arny questioned the future professional standing he would have after working at Pine Mountain, he decided that the “opportunities which Pine Mountain would offer to a leader there would far offset any future disadvantages which might possibly arise from a lack of experience in a strictly social work organization.”

Arny’s education, interests, and experiences indicated to Morris a young man of promise, particularly with regard to student counseling. Morris offered Arny a counselor position with a salary of $75.00 a month and maintenance.

Arny arrived just before his starting date of July 1, 1940, moved into a furnished room at Boy’s House and began his new work with enthusiasm. For the next two years he taught classes in civics and current history and served as a guidance counselor for the boarding school students.

Fern (Hall) Hayes, a secretary in the Office, remembered Malcolm Arny well. At one point during Arny’s employment, Glyn Morris had assigned Fern and Georgia (Ayers) Dodd to assist Malcolm with his secretarial tasks. Arny had become so deeply involved with individual student counseling that he found it difficult to keep up with the paperwork and record-keeping that the guidance position required. 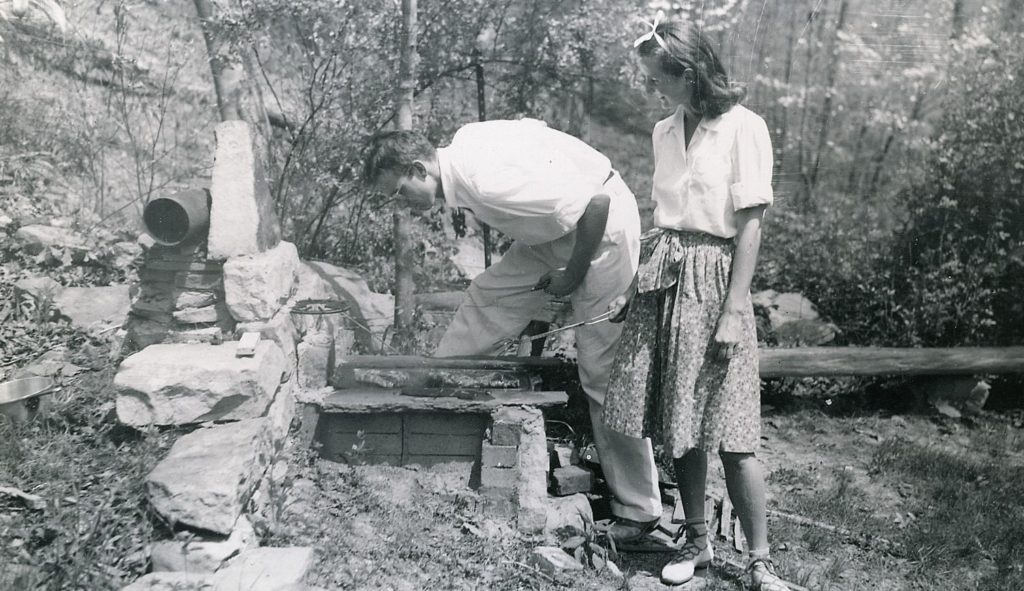 At the beginning of his second school year, a new worker, Martha Anne Keen, arrived to teach English and dramatics and serve as a housemother. She stayed two years, from September 1941 until June 1943. By that time Malcolm was no longer working at the School, but it wasn’t long after Martha Anne left that the two married on August 21, 1943, in Miami Beach, Florida. According to their marriage certificate, the ceremony took place in the Office of the Chaplain at the Officer Candidates School in Miami.

During the Christmas season after Arny’s stay at Pine Mountain, he sent the School a card with this handwritten note:

[Greetings] to all those at Pine Mt. Settlement School both workers and students whose association during the last two years has meant so much. I trust that the future may bring us together again. 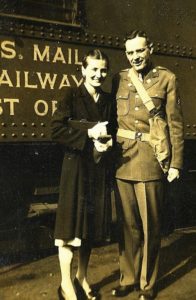 In July 1942 Arny had enlisted in the U.S. Army for the duration of the war and was stationed at Ft. Thomas, Kentucky. In December 1943, a letter to Barbara Spelman Allen (John Spelman’s sister and former PMSS worker), reported a PMSS visit by the Arnys: “Martha Anne Keen Arny and Malcolm Arny are visiting here for a few days while he is on leave from Camp at Greensboro, North Carolina.” The letter was truncated, but possibly written by then Director William Webb

As of May 1945, Arny, by then a lieutenant, and his wife Martha were living in Holladay, Utah. After the war, he went on to Columbia University’s School of Social Work (New York, NY) on the GI Bill and graduated with a Master of Social Work in February 1949. 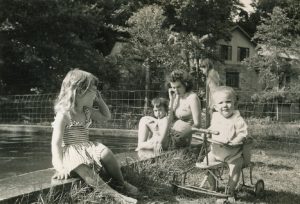 Malcolm and Martha then returned to Harlan County, Kentucky, with their two daughters, Suzanne and Katherine (Kitty), to work in the Harlan County Schools as a social worker. The eventually had two additional children, Elizabeth (Libby) and Martha Jane (Jane).

Suzanne Arny Fuller describes the family photographs that she contributed to her parents’ biographies:

“There are two of my parents at Pine Mountain in the 1940s and one of my Dad off to war. Then there are my two sisters, Kitty and Libby at the Pine Mountain pool in the 1950s when we lived in Evarts. Finally, there are my sons, Michael and Eric, with Burton in the 1980s. They loved to help him herd the sheep from near Big Log to below Laurel House. It is wonderful to have that three-generation connection to PMSS.” 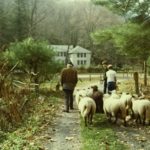 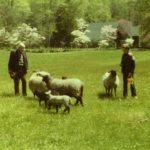 Malcolm M. Arny was born on April 11, 1913, the son of Henry V. Arny (born in Pennsylvania) and Katherine M. Arny (born in Ohio). Two of their four children were also born in Ohio: Robert A. Arny, the oldest, and Sara E. Arny. The younger two siblings were born in New Jersey: Malcolm Moody Arny and Francis V. Arny. The Arny family lived in Montclair, New Jersey, from c. 1914 until at least 1940. Malcolm Arny died on January 7, 2000, in Northampton, Massachusetts.

The School has long treasured a John A, Spelman III watercolor/tempera painting that was donated in honor of Martha Anne and Malcolm Arny by their four daughters. The painting currently hangs in the Laurel House dining room. See an image of the painting on the page for Martha Anne Keen‘s biography. 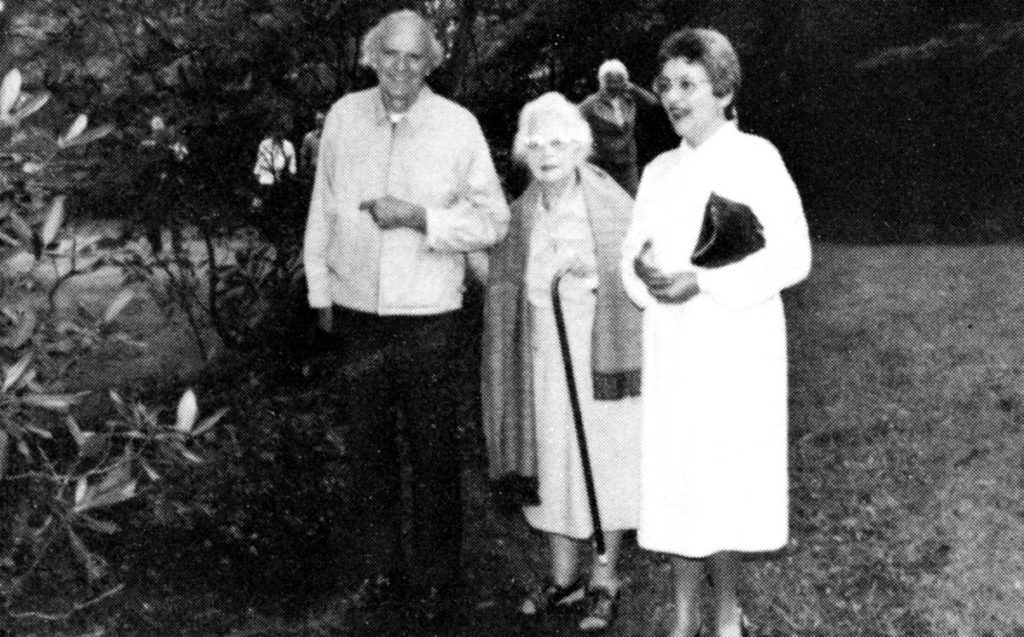 The following watercolor painting by John A.Spelman III was donated by the Arny children in memory of their parents. It hangs in the main living room of Laurel House II at Pine Mountain Settlement School. 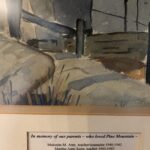 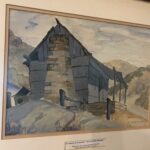