THE FARM AND GARDENS 1947 DRAWING 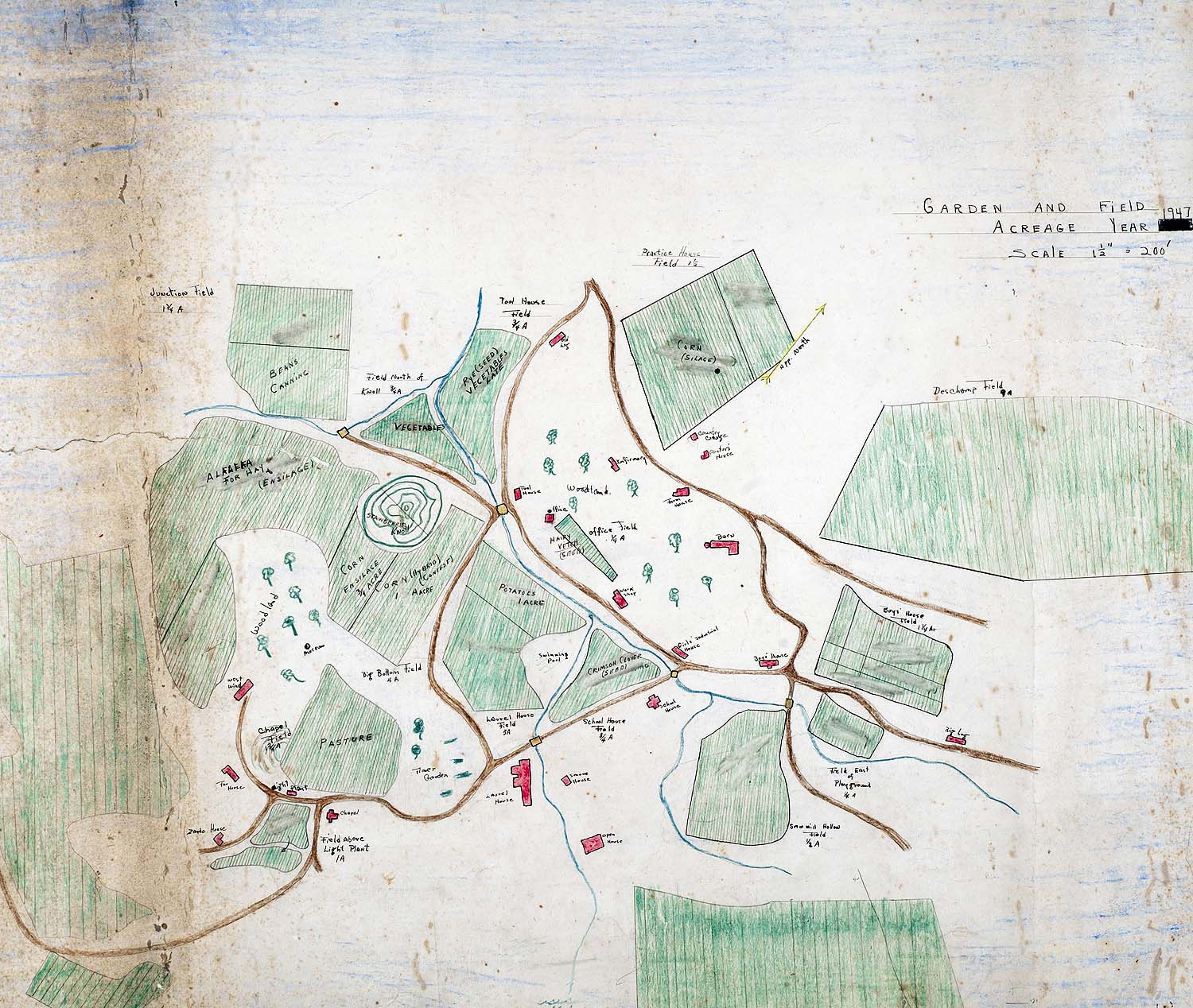 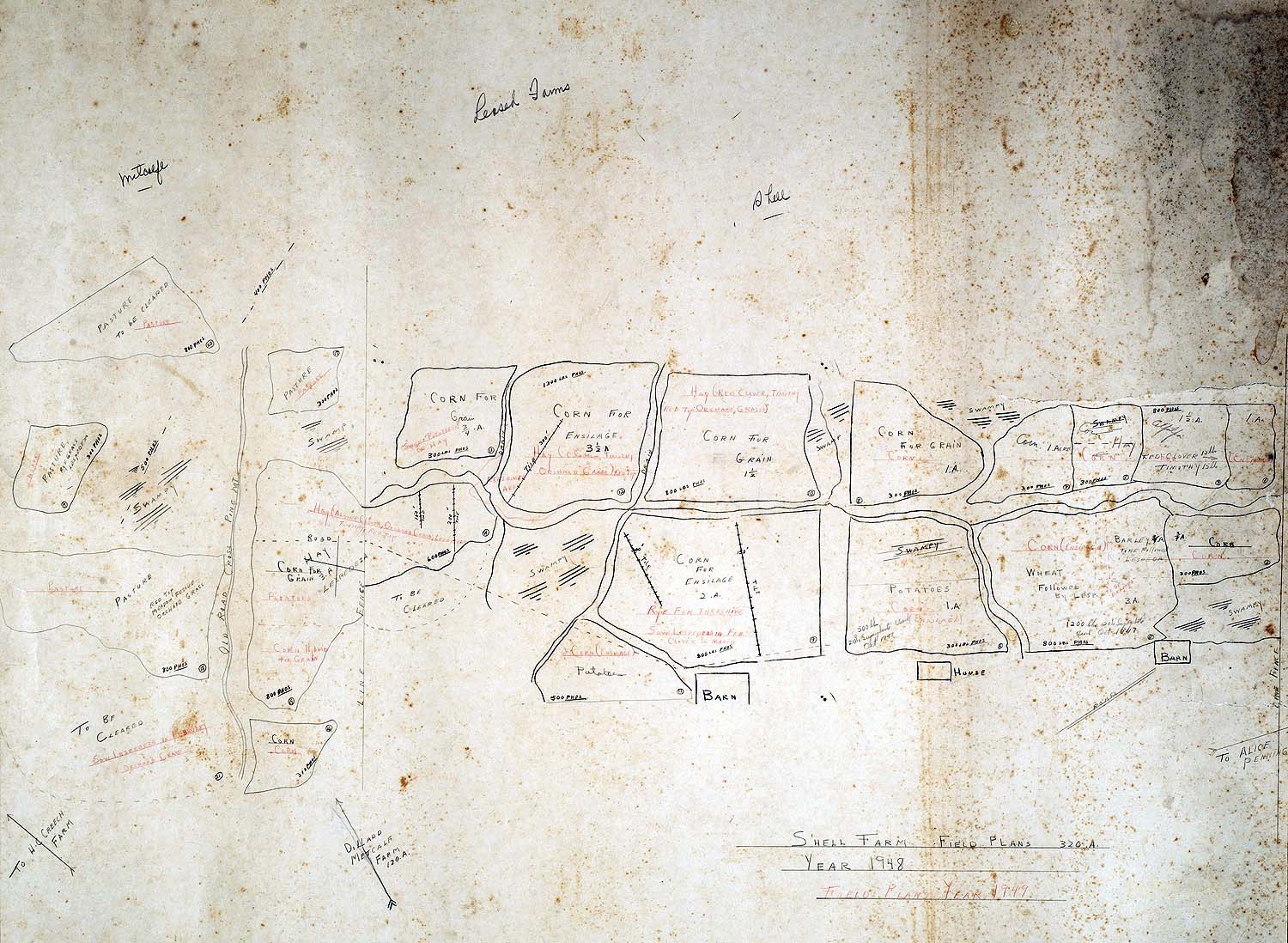 The FARM at Pine Mountain has a long history and one that often reflected the economic health of the institution. The most extensive farming was conducted during the early years of the School when the process of preparing the land was the most intense and the demands for produce from the farm were at their most critical. The FARM program has always been included in the functions of the School for most of its existence. Today, the School still has a Farm Manager, but the focus has shifted mainly to garden produce and does not include livestock.  The farm, however, remains within the core programming at the School.

Evelyn Wells, in her notes for a History of the School, left the following early record of the FARM:

After some experimenting with the raising of corn that was found to be a too expensive crop for us, and the chief effort has gone into developing, by ditching and draining and building up a sour, heavy soil with cover crops, a garden which little by little has spread over our bottomland until in June 1928 its produce was worth some $3200. Our garden land had a sorry reputation among local farmers when the school began, but by dint of thousands of feet of ditching and draining and a long rotation of crops it has been built up from an unproductive swamp and the kitchen is extremely dependent upon it,

For the first two years nothing could be done but ditching and fencing and soil reclamation. It was of no immediate good to the school table for some years. But in 1917 Mrs. Zande writes of having helped can 1200 half-gallon cans of our own vegetables. It is fortunate that the garden began to yield as the war came on and food became a grave consideration. While we were experimenting with raising corn and hay, the Wilder farm and the Medcalf farm on Little Laurel were cultivated for those crops.

During Mr. Zande’s regime the work of ditching and replacing old ditches went on, the creeks were straightened to give a handful more of tillable land here and there, the boulders that one met all through the garden were blasted out, more land was cleared, and the timber used in construction, instead of being burned according to the usage of the country; and at the end of that time, there were about 75 acres of farm and garden.

During the period that Mr. Browning has had charge, the garden acreage has practically doubled, and the work of early years has borne fruit in Mr. Browning’s wonderful garden crops. The policy of sowing cover and legume crops and turning them under as an equivalent for manure has continued.

While Pine Mountain has always fallen far short of being a model farm for the neighborhood, it has taught valuable lessons, such as terrace gardening, virtually unknown here until people saw the school hillsides terraced, the rotation of crops, and the turning under of legume crops. In the past three years, in particular, neighbors have begun raising soybeans and cowpeas for hay.

In later years Pine Mountain Settlement School’s  farm continued to provide much of the produce needed in the dining room of the institution but also experimented with other farm ventures. The farm under the direction of Glyn Morris from 1931 until 1941, was particularly experimental. During the Morris Years years, the dairy herd was a model for the community and also provided a revenue stream for the institution. It was a unique experiment within the rural settlement movement.

By 1950 it was clear that the farm could not sustain its labor intensive farming activities with no boarding school labor to support the enormous effort needed to make it productive. The Boarding School closed in 1949 and only staff and Community hires remained to keep the farm active.

While few drawings have survived from the earlier years, the two detailed drawings completed in 1945 and 1947 by William Hayes, the Farm Manager during the 1940s, give a good overview of the amount of land that was placed under cultivation by the School during the Boarding School era. Land cultivation takes labor and at the end of the Boarding School years, the forest began the slow process of reclaiming the land and programs began the adaptation to the changing national, regional and local demands and trends.

DANCING IN THE CABBAGE PATCH Farm and Dairy I Early Years