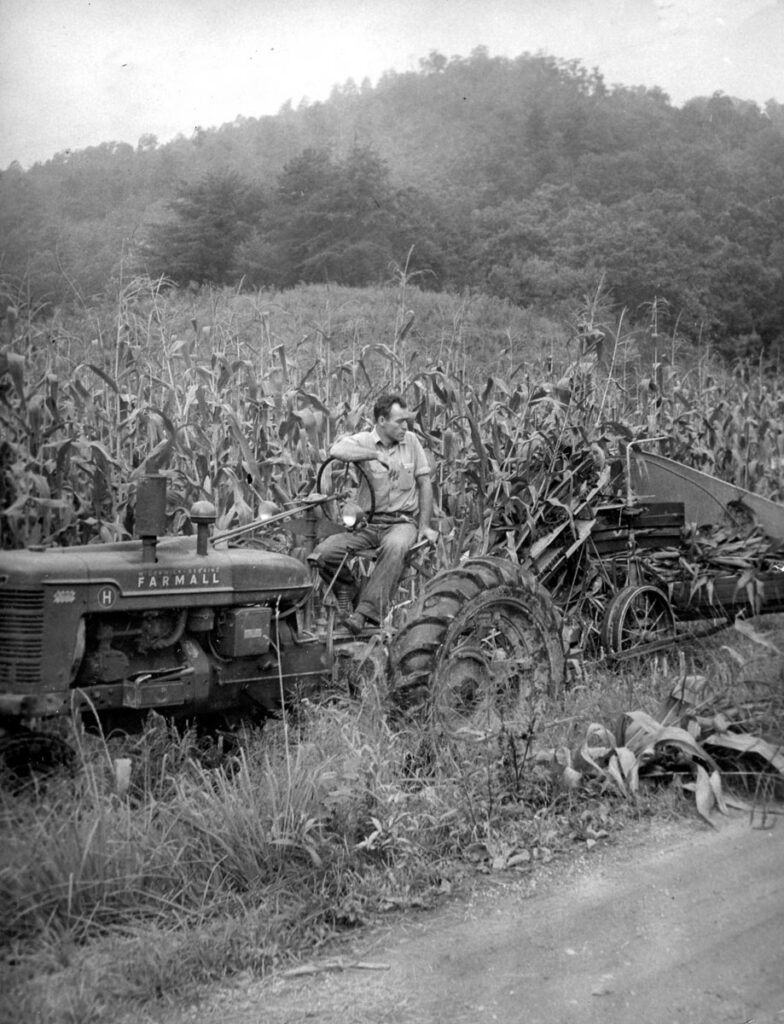 Harvesting corn for silage. 07b 64_life_work_general_farm_grounds_sorghum_007b

WILLIAM AND LOUISE WILL BROWNING

When William B. Browning came to Pine Mountain Settlement School (PMSS) to work as the farmer in 1920, he became a favorite with the women staff. He is described in many staff letters as quite attractive and charming, but someone who “needed to be taken care of.” One of the workers described Mr. Browning as a “buttonless man” who had difficulty keeping his wardrobe together. It appears that many of the women at the School were eager to sew on buttons for the “buttonless man.”

Mr. Browning’s charms may have helped him become the first farmer to stay longer than two years at PMSS (with the exception of Leon Deschamps, whose duties were spread among three positions: forester, farmer, teacher). Besides hard labor and long hours, work on Pine Mountain’s Farm also required considerable ingenuity and diplomacy in negotiating Katherine Pettit, the School’s co-founder and co-director, and the skepticism of the surrounding community of new farming practices.

Before Browning, there was a succession of short-term farmers under Pettit’s supervision. Evelyn K. Well‘s history of the School lists those earlier farmers as Jesse Baugh (1913), Horace E. McSwain (1915) and Luigi Zande (1916).

Browning was assisted in his work by Fannie Gilbert from 1922 to 1924, and by Leon Deschamps, a Belgian whose training as a forester allowed him to address both the silviculture and farming needs of the School. Browning and Deschamps overlapped from 1920 until 1927 when Deschamps left Pine Mountain. Under the guidance of Browning and Deschamps, the farm had grown in productivity and, like the previous farm workers, these two farmers largely developed the land according to Miss Pettit’s expansive plan. (After Browning and Deschamps, however, the direction of the farm went through another series of short-term farmers and some of Pettit practices and vision were set aside.)

Letters, narratives and publications often referred to Mr. Browning’s work with much appreciation for his leadership in the agricultural aspects of the School. The November 1926 issue of Pine Mountain Settlement School Notes relates the following:

Out of Mr. Browning’s garden this season have come all the summer’s vegetables and green things, and celery and cabbage and winter roots will keep us going through the coming months. And by the time the apples are canned, we shall have put away nearly two thousand half-gallon jars of food for the winter, most of which we have raised ourselves.

And this from the Notes of November 1927:

While good weather lasts, [one squad of our boys is] working hard outdoors. Mr. Browning’s boys, working on the farm, are burying our 9,000 cabbages and our 7,000 heads of celery, gathering fodder, and terracing a waste hillside to prepare it for grazing purposes.

In her history of PMSS, Evelyn Wells wrote:

During the period that Mr. Browning has had charge, the garden acreage has practically doubled, and the work of early years has borne fruit in Mr. Browning’s wonderful garden crops.

Two years after his arrival, Mr. Browning met that “someone” to take care of him that the staff felt he needed. Miss Louise Will began work as housemother and music teacher at Pine Mountain School in 1922 and during the school year of 1924-1925, she and William Browning were married, according to Evelyn Wells’ history.

Pine Mountain Church records describe the Brownings’ wedding as the first wedding ceremony, held on May 10, 1924, to occur in the Chapel. Carl Michel, Presbyterian minister, officiated.

[Pages 5-6] Thursday, night, also, I went to a dinner party at the Brownings. Mr. Browning is in charge of all the farming here and Mrs. Browning takes [?] charge of the music and gives music lessons. Mr. B. was born right in this valley and used to come here to school*. Mrs. B. was a teacher here for the 5th & 6th grades, and she fell in love &  married him. She comes from Louisville. They have been married 8 years and seem very happy. There were about ten of us over there and we surely had a delightful time and a marvelous dinner.

[Page 7] Mrs. Browning … is awfully nice — is at the head of the music here — teaches 15 or 20 kids piano, plays for all the dancing, Chapel, etc. She is in charge of the fair … that we are having this Saturday, ….

*Both the Journal above and a November 1926 issue of Notes mention that William Browning had previously been a student at Pine Mountain Settlement School. However, to date, no school record has been found in the Archives to verify this.

Neither has information such as later schooling, birth date or death date been found about William Browning. However, an entry for Louise Will Browning in the Find-a-Grave Index indicates that she was born 19 August 1897 and died on 28 May 1988. She is buried in Evergreen Cemetery, Louisville, Kentucky.