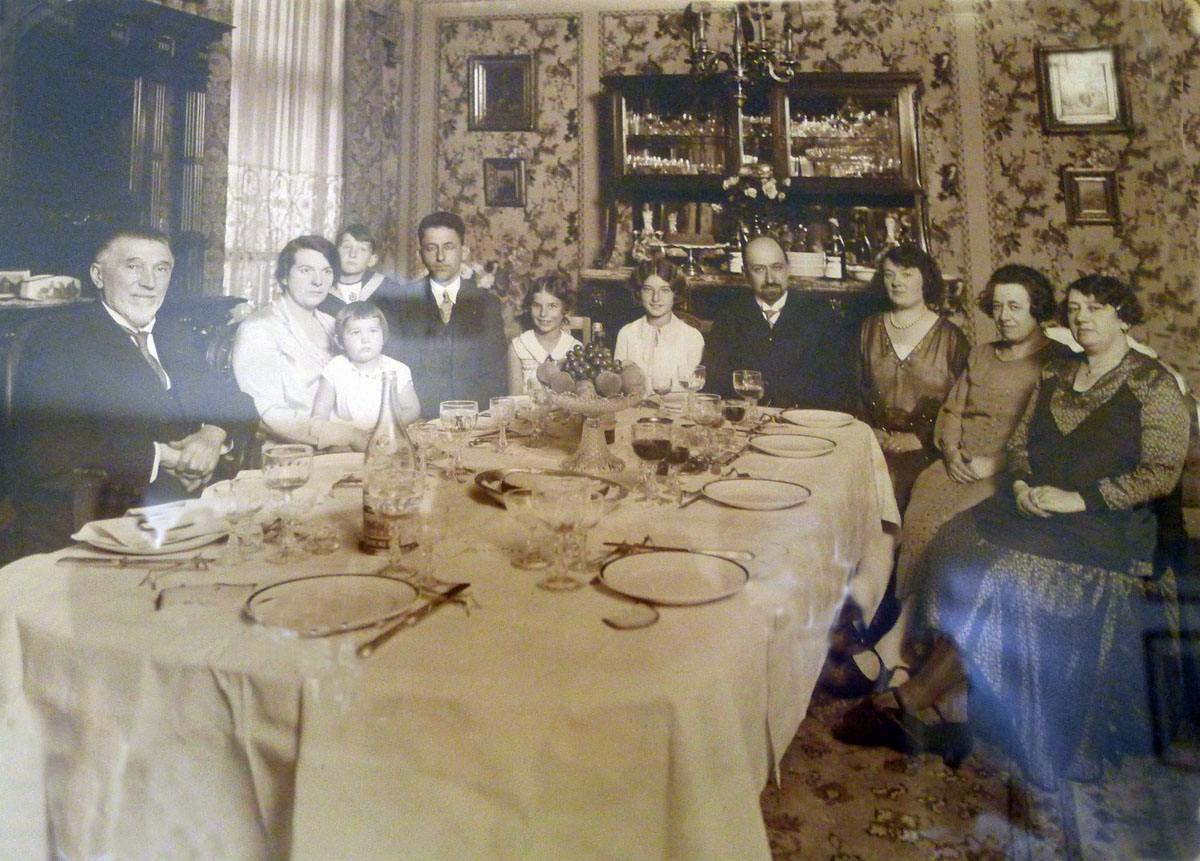 Leon Deschamps at home with his family in Belgium. 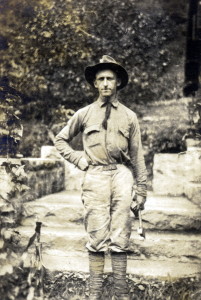 The long history of Pine Mountain Settlement School is replete with workers, each with his or her own story. Some stand out as stars because of their long-standing devotion to the School and their principles, inspiration, and contributions to the School’s environment. One such star is Leon Fobert Deschamps. Originally from Belgium, he served in the early years of the School as a forester, farmer and Scoutmaster, then assistant principal and teacher of French, general science, and physics from 1922 to 1925.

One of the earliest mentions of Leon Deschamps at PMSS was by Katherine Pettit in her letter to Board Member Mrs. J.R. Morton, dated January 12, 1917:

….[Y]our Belgian forester, Mr. Deschamps, came in November and is doing such valuable work in our Pine Mountain forest. You know the evening I met him at your house, he offered to do this. He is teaching forestry to all the children in school, and in the afternoon he takes the boys out and they all work in the woods, he teaching them how to tell the sound and the diseased trees apart, how to cord wood, how to clear out the undergrowth, and so many many necessary and valuable things. They are working on a specimen perfect acre now, and I never go about the place but what some of the boys stop me to tell me all the interesting things that they have learned in the woods…..We like Mr. Deschamps so much, as we see him fitting into our life. He loves the social side of it, and is a great addition.

A June 1917 letter from Marguerite Butler to her sister also mentions Leon, reporting that he was at Pine Mountain School “all winter” and had just returned to the School after enlisting with the “forest engineers” as part of the World War I effort. Working under Katherine Pettit, he “took charge of everything, giving K.P. a rest for a couple days.”

Many immigrants served in WWI and did so with great sacrifice. Leon Deschamps had a personal stake in the war, as his country of origin, Belgium, was in the midst of a mighty struggle. Soon after Leon enlisted, he was called to serve in the American Expeditionary Forces and sent to Europe in 1917 under the command of General John J. Pershing to help fight World War I. His skills as a member of the forestry department and a translator were of great use to the American forces. In reading through the CORRESPONDENCE related to Leon Deschamps, we are reminded of the discrimination that many immigrants faced following WWI and WWII and today. As a “foreigner” Leon was excluded from many of the opportunities afforded job seekers. In some cases, the discrimination came from some of the more “enlightened” educational institutions in the country. His talents, determination and the enormous endorsement given by those who worked with him are well documented in his correspondence, He left legends in all the institutions he touched. Not many of us can claim such legacies.

Following his military service, Leon Deschamps returned to Pine Mountain. According to Notes from the Pine Mountain Settlement School May 1919 issue,

Mr. Leon Deschamps has returned to us from France, and is gardening as diligently as he labored in the forestry department of the American Expeditionary Forces….[In earlier years] he inventoried the timber on the school grounds, made a collection of woods, taught us the proper care of the forest, and made a “Perfect Acre” in our midst, as a specimen of the way we should forest our woods. He went to France with the [U.S. 10th] engineering corps, but wrote us that when the war was over he would return to Pine Mountain, “[m]y home in America,” where he felt the opportunities for work were very great. He has many qualities which make him a valuable worker, but, best of all, he has the gift of a devoted heart. 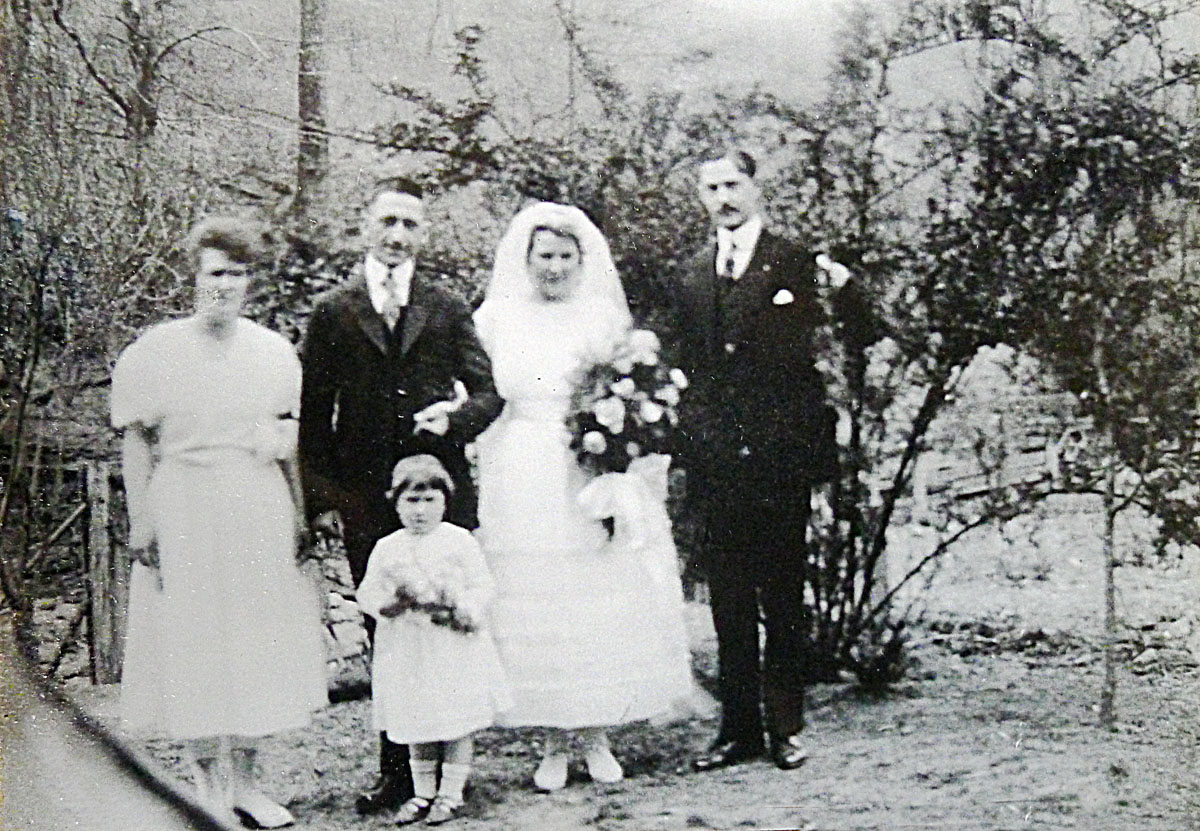 Wedding of Leon Deschamps and May Ritchie at Viper, Kentucky, 1919.

Part of this “devoted heart” was for May Belle Ritchie, the oldest daughter in the Ritchies, the “Singing Family of the Cumberlands,” who were well-known for their extensive repertoire of traditional Appalachian ballads and folk songs. May Ritchie, the first in her family to come to Pine Mountain as a student in the early 1920s, soon charmed Leon and they were married in her family home in nearby Viper, Kentucky, in 1919. May’s daughter tells the story of May tripping in the dining room and spilling some dishes and quickly recovering. When Leon saw her accident he reportedly said, “That’s the girl I’m going to marry.” May’s “long, honey-red hair”, and her “tall … well built” form, typical of the Ritchie family, might also have played a part in his spontaneous declaration.

The story of their courtship is told by May and recorded in her youngest sister Jean’s book, Singing Family of the Cumberland, 1955, pp. Jean was not at the wedding as she was not yet born and was the youngest of fourteen Ritchie children.  May’s account of the events leading up to the wedding and the Viper ceremony attended by many Pine Mountain staff can be found in May Ritchie’s biography.

According to an early PMSS trustee, Darwin D. Martin, the “Perfect Acre” was developed by Leon Deschamps as a forestry demonstration site. An evening picnic was held there following the first meeting of the PMSS Board of Trustees in October 1919. It was always a very special place and well guarded to maintain Leon’s idea that it was to be left for “nature” to maintain. In later years, when some aggressive plants moved in, there was much debate as to whether to tamper with the one-acre plot. Pettit was probably the most protective of the site. As memory faded and trees grew, the acre has seen much “pruning” and timbering. One can only wonder at the reaction Leon would have given these various activities. 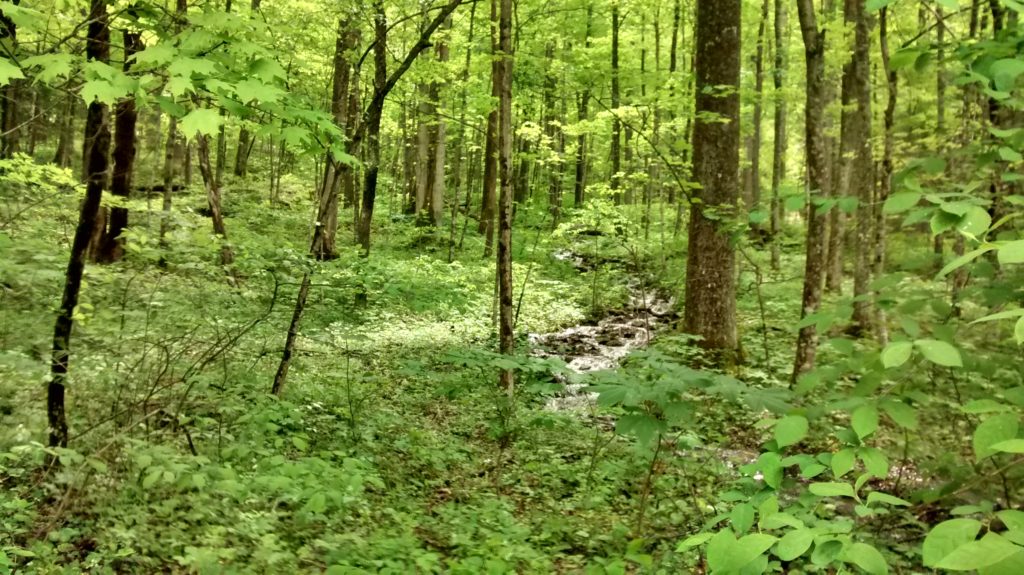 As a Scoutmaster to two large groups of Boy Scouts, Leon incorporated his forestry knowledge into their projects and trained the boys to manage the annual forest fire menace in and around Pine Mountain, as described in this March 1920 issue of Notes:

The Boy Scouts, with Mr. Leon Deschamps, their Scoutmaster, are busy every Saturday afternoon, and the delightful things there are to do in this country are making possible all sorts of camping and tramping expeditions….The Scouts are to co-operate with the State Forestry Department in patrolling the new timber reserve which adjoins the school property on Pine Mountain. This is the first forest reservation in the State of Kentucky.

Leon’s commitment to the proper care of Pine Mountain’s natural environment and to the training of future generations was essential to the well-being and even safety of the School, as recorded in the November 1921 issue of Notes:

Mr. Deschamps and his boy foresters have a full program ahead. They have made a fire line all around the School property, on the mountain; have estimated the amount of standing timber we own, and have two plots of woodland perfectly forested. 120 acres more are to be put in proper condition as rapidly as possible.

LEON DESCHAMPS: Leon and May at Brasstown, NC

After nearly a decade at Pine Mountain, Leon moved on to work at other institutions. By 1927 he and his family were living in Murphy Township (Cherokee County), North Carolina, where he was a civil engineer at the nearby John C. Campbell Folk School in Brasstown, building field stone houses and studios, among other projects.

Leon Deschamps wasn’t the only Pine Mountain staff who ended up at the John C. Campbell Folk School. Many of the posts of Dancing in the Cabbage Patch that explore Foodways, on this website state that “important staff” such as Marguerite Butler, and others, including Leon and May, were recruited to John C. Campbell, particularly those who had helped to establish such central services as kitchen, farm, and forest. May and Leon “brought both the Pine Mountain and the Ritchie family Kentucky foodways heritage and Leon’s Belgian food sensibilities along to the folk school. Many of the lessons learned at Pine Mountain were adapted to the folk school at Brasstown.

Leon and May’s journey to Brasstown was a bumpy road, as can be read in his CORRESPONDENCE. But, once located there, he proved to be one of the most valuable of their staff and his work may be seen in many buildings of his design and construction, in the land and in the surrounding forest. May contributed much to the folk heritage history of the folk school.

LEON DESCHAMPS: Leon and May at Warren Wilson College

Following their time at Brasstown, Leon and May moved to Swannanoa, NC. Once called the “Farm School” and later Warren Wilson College, the work there must have seemed very familiar to Leon and May. There, too, Leon Deschamps left his mark, designing and supervising the construction of several buildings that still stand at the school. The largest project was the Bryson Gymnasium, that continues to be used for Contra dancing and other events.

In 1944, Alice Cobb wrote a report to Trustee Dorothy Elsmith of her visit to several mountain institutions, including her visit to Warren Wilson College in Swannonoa, where she called on the Deschamps family. Cobb noted that it was appropriate for Leon to be associated with Warren Wilson College as the institution had much in common with Pine Mountain, including over the years some of its staff (John Spelman III, Birdena Bishop, and others). Cobb’s report is typically hyper-critical, but captures the life of the Deschamps at the school and puts it in contrast with their time at Pine Mountain.

To this day, Warren Wilson requires every student to complete a course of study, to work an on-campus job, and to perform community service, much like Pine Mountain’s early programs for its students. Leon’s work at Warren Wilson is included in the recent  book by Frederick Ohler and Beverly Ohler, titled They Faithfully Led the Way: Remembering Those Who Came Before and Helped Create Warren Wilson College.

Leon Fobert Deschamps was born in Leige, Belgium, on July 18, 1891, to Caroline (Faubert) and Joseph Charles Deschamps. After high school at the Academy of Institut St. Louis, Brussels, he attended one year of college at the same school. He went on to study two years of forestry courses at the School of Forestry in Bouillon. Later, in the United States, he took courses, including mechanical drawing, at Peabody College for Teachers in Nashville, Tennessee. 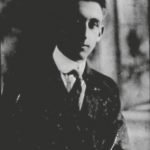 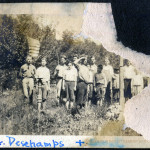 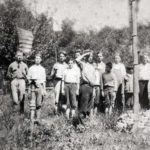 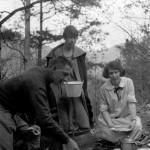 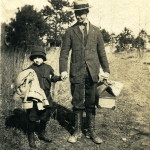 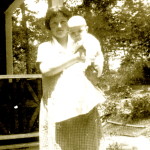 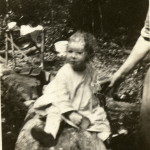 Carol Deschamps near her mother May Ritchie Deschamps (out of picture) [X_099_workers_2520c_mod.jpg] 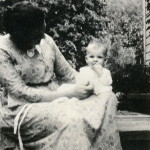 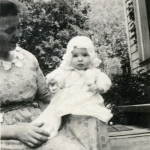 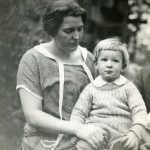 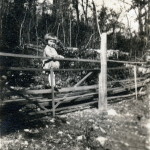 Carol Deschamps, daughter of Leon and May Deschamps. X_099_workers_2501a_mod.jpg 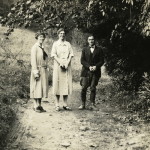 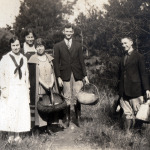