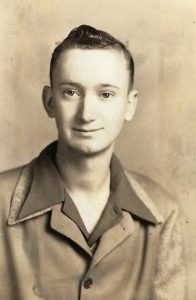 Sidney Helton probably wasn’t aware that the letter of application he wrote to Pine Mountain Settlement School at age 14 would open so many doors to his future. Although the School had no student vacancies when he first applied in February 1941, he persisted and wrote again in August. The counselor, Malcolm M. Arny, was impressed:

We appreciate the fact that even though you have not been accepted for entrance right away you still desire to come here. This has given us an even better idea of your sincerity. We shall definitely keep you in mind for any opening which may develop….

Sidney’s persistence was rewarded and he was admitted to PMSS the following September. At the end of his first semester, he sent his mother an evaluation of his studies and other experiences at Pine Mountain. As explained in an accompanying letter from the acting director, William D. Webb, to Sidney’s mother, such letters were required of each student, stating that “We feel very strongly the importance of self-analysis and criticism, for the best personal development comes as a result of this.”

Sidney’s first letter to his mother was somewhat hesitant and terse, but positive, and emphasized his interest in woodworking. in fact, the acting director stated that Sidney “has been Mr. [Boone] Callahan‘s right-hand man in the shop and … Mr. Callahan speaks highly of Sidney’s progress.” This interest in woodcraft was to stay with Sidney for most of his life.

However, like many of the new students, Sidney’s adjustment to other demands of the School wasn’t entirely easy. In a December 24, 1942, report to Sidney’s mother, Principal Arthur W. Dodd wrote:

Sidney is growing fast and is going through that unsettled period that all boys have to pass through. The most pronounced characteristic of this phase is his extreme shyness, lack of confidence in his own powers, and a general withdrawal from things of a social nature. He makes no effort to take part in the dancing, which will cause him to miss a lot of fun later.

His industrial work has been good, and he continues to show talent in all things pertaining to woodworking. He is becoming absorbed in scouting and it is my hope that this will lead to many interests especially that of reading….

Sidney’s later letters to his mother soon became much longer and more descriptive and, importantly, positive as he adjusted to the educational and social demands of the School. He was adapting to his new environment and progressing in his studies and particularly in his woodworking:

..In woodwork I have made an end table, shelf and many other small things. In civics I am writing a book. It is on woodwork. I have learned how to conduct a meeting, make a constitution, and have learned about the history of Kentucky and Pine Mountain history.

In mechanics I have made a ring and a shovel. I have learned how to grind valves, clean cylinders, and things like that. Another important thing that I have learned is climbing a telephone post.

…I am learning to cooperate with boys, young, older, and boys at my age because I am with them all the time…

An event that has helped me is a former Pine Mountain student, Calvin Jones, came over here on May [?] and gave me a ruler and encouraged me to stick to wood working.
[May 14, 1942]

Sidney’s broad-ranging studies and work assignments were typical of the PMSS high school curriculum in the 1940s:

Sidney A. Helton – After Pine Mountain

Sidney Helton’s time at Pine Mountain, like many of his classmates, ended in December 1942. Having completed three semesters, the pressures of a world at war (WWII) on Sidney and his family intervened. After the first semester of his second year, he left school during Christmas vacation for a job as a shipping and receiving clerk and with the intent to fight for his country. 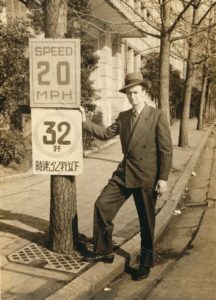 Two years later, Director William D. Webb received a letter from Sidney that began with the words, “[Here] I am ready for the army. Just waiting for my call….” followed by a request for his school records. After enlisting in the U.S. Army on April 19, 1945, he spent time at Ft. Hayes, Columbus, Ohio. He was then assigned overseas to the Pacific Theater. While stationed in Japan, he worked as a switchboard operator. He was honorably discharged and was decorated with the Asiatic Pacific Theater Medal, Occupational Medal, and a World War II Victory Ribbon. He then stayed in Japan as a civil servant, as they were in need of workers to help rebuild the country.

Once he completed his tour of duty with the armed forces, Sidney took an interest in furthering his education. In August 1949, Principal Arthur W. Dodd sent this description of Sidney’s schooling to the registrar of the University of Kentucky (UK) in Lexington:

Sidney Helton was actually enrolled at Pine Mountain from September, 1941, till December, 1942, for the entire Freshmen year and one whole semester of the Sophomore year. He has not been in residence at this school since that time. However, in view of his army service and of his record attained in the G.E.D. tests which he took at Union College, Barbourville, Kentucky, in May, 1949, it was decided to grant our diploma as a high school graduate…..In view of this student’s record in war and post-war service, I am glad to recommend him as a very promising student who apparently will enter upon his work with unusual earnestness of purpose.

Upon receipt of Sidney’s application, the assistant registrar of UK wrote Sidney that the school was unable to approve his admission as a freshman. Sidney did have sufficient high school units. He suggested that Sidney come in for tests and interview to enroll as a special student. Sidney’s “unusual earnestness” paid off as the record shows that he was accepted by UK. in the College of Arts and Sciences in 1949-1950.

Sidney spent one year at the University of Kentucky, the left for a position with Chrysler Corporation in Detroit, Michigan. He continued his studies at the Business Institute in Detroit for a year but quit taking classes when the demands of a full-time job took precedence.

Sidney later settled in Dayton, Ohio, where he worked as a transportation dispatcher until his retirement from that position in 1978. He then moved back to Wallins, Kentucky, to be the owner/operator of Sid’s Mobile Home Park, which he still runs. 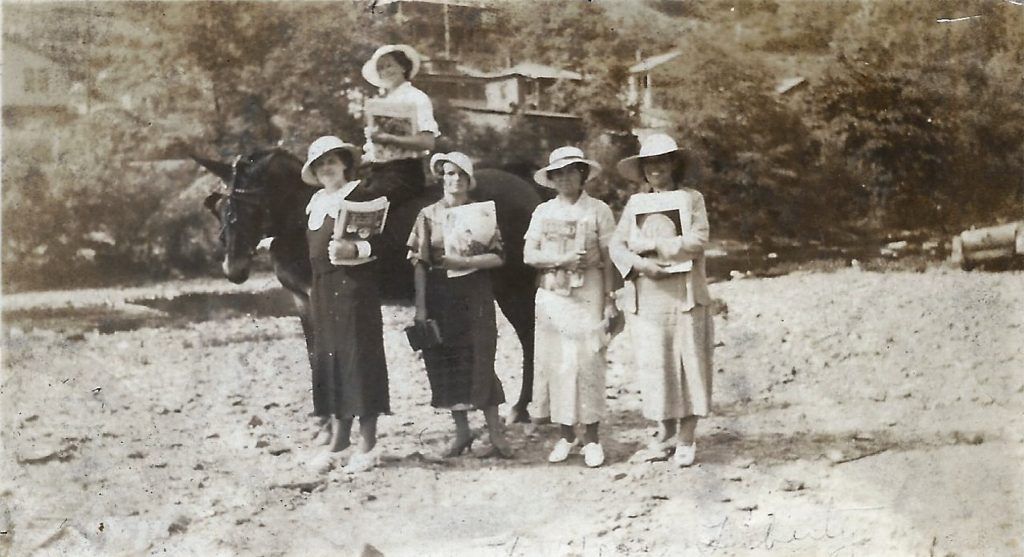 Nellie Helton (on horse) as one of the Pack Horse Librarians, c. 1940. Photo courtesy of Janet Helton Howard.

Sidney’s dogged determination and his “unusual earnestness” probably was inspired by his mother, A notation on his application mentions that his father left the family “8 yrs. ago” and that his mother was a “pack horse librarian for 3 yrs.” Nellie Garrett Helton was one of the remarkable Packhorse Librarians of Eastern Kentucky whose obvious dedication to literacy and to the pursuit of learning kept her carrying books and magazines to families for three years. These remarkable Packhorse Librarians, both men and women, did much to raise literacy and encourage continued learning in the population of Eastern Kentucky. Pine Mountain was one of the first sites to support the program. [See: “Community Group Assembly“] 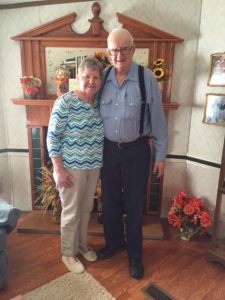 Sidney, currently 90 years old, and Rebecca, as well as their three children, reside in Wallins Creek. He has eight grandchildren and eight great-grandchildren.