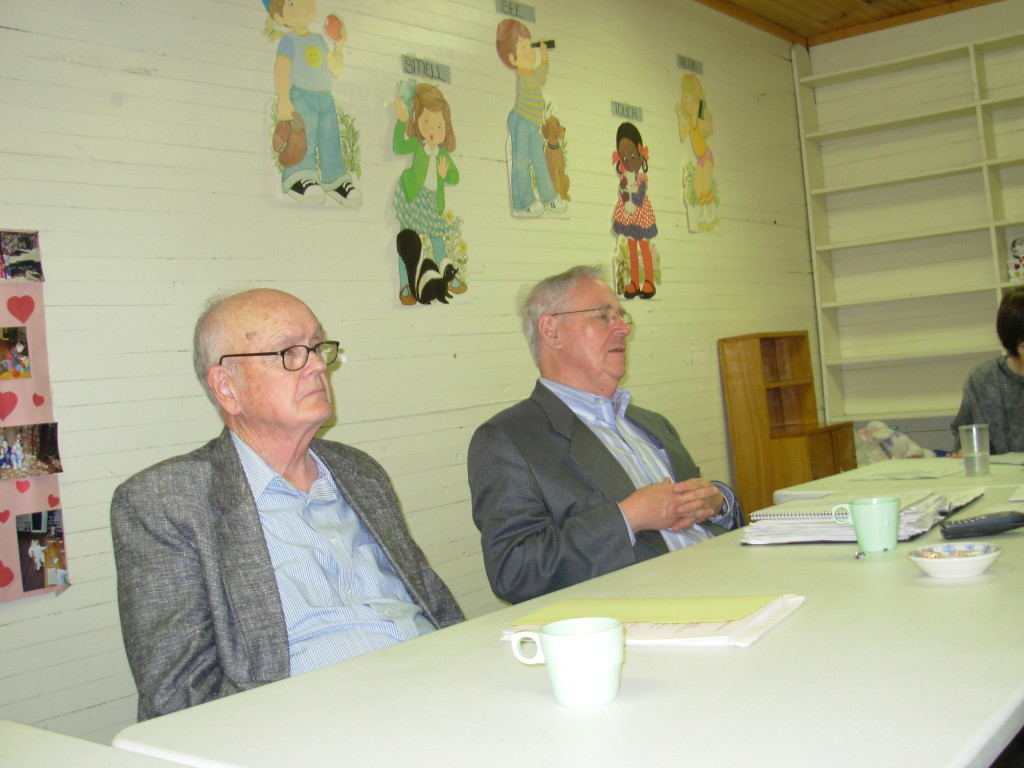 Allen Long (on right), presiding at a Board of Directors’ meeting in Boys’ House, Pine Mountain Settlement School, c. 2007. [DSCN1012.jpg]

Allen E. Long first came to Pine Mountain Settlement School in September of 1947 as a boarding student. Beginning in c. 2007, he served as president of the School’s board of trustees for seven years. The following is derived from accounts by Allen and his mother, Ethel Mae Anderson Long, of his arrival at Pine Mountain Settlement School and his participation in the last years of the institution as a boarding school.

Allen was born in 1933 in McCreary County, Kentucky. Located in southeastern Kentucky on the border with Tennessee, this was a place where history and culture were highly influenced by the timber and coal industries. He writes of his family:

My father became a coal miner at an early age when he should have been in school. He went to work when he finished the sixth grade. My mother did graduate from high school….The Long, Anderson, Winchester, Shelton, and Guffey families go back in KY until at least 1800. I have traced them further back.

By the time Allen was three years old, his family lived in a mining camp located at Barridge (Perry County), Kentucky, while his father was employed in the Green Ridge mine. Allen remembers the isolation: “The closest town to us was Vicco and the county seat was Hazard. We had no car so we walked to Vicco [or] rode a bus or taxi to Hazard.”

Allen’s father moved the family “from mine to mine so we lived at different coal camps and attended different schools.” At age six in 1939, Allen started “Primer” [first grade] at Kodak Elementary School in Perry County, Kentucky.

For second grade Vicco Elementary School; third at Allock (Carrs Fork); 4th and 5th grade at Yellow Creek. We moved back to Barridge in September of 1945 where I finished the 6th, 7th, and 8th grades. Some of the children who started school with me finished with me. My last two years (1945 – 1947), we lived next to the family of Rufus Fugate [Rufus came to Pine Mountain as a student in 1948 and made a career as a County Agent for the State of Kentucky. He is now deceased, but many of his stories linger.] ….

Besides attending school, Allen earned spending money by delivering the Knoxville (Tennessee) News-Sentinel newspaper. He also wrote community news for the Hazard-Herald weekly newspaper and, during that time, learned to set his first line of type and to run a job shop press.

One of those recruitment journeys is recounted in the notes of Alice Cobb who, with Arthur Dodd and Gladys Hill, Pine Mountain teachers, traveled to talk with families in the Whitesburg area and also near Vicco and Kodak, where Allen and his family lived. The account describes conditions in the rural communities that were served by Pine Mountain. The Reynolds family described here sent all their children to Pine Mountain.

…This is the part of the job that must be the most exhausting to the counselor and the principal, I judge. When we were finally ready to go on [a flat tire prevented a trip to Whitesburg] it was too late to get to Hot Spot (now called Premium) and we went on to Kodak, where we were to see the Reynolds family, and Grandfather and Grandmother Brashear, F.’s grandparents. This was a real hunt through the woods and over the hills, through two of the grimmest coal mine camps I have ever seen — it was heartbreaking to see the dirty little houses on stilts, many of them empty perched in clusters over the bare hillsides — no trees, no public buildings of any kind, not even churches in many of them. And thousands it seemed to me, of dirty little children peeking at us from broken windows. I kept thinking of them — how many there were, and how few would have a chance of any sort in the world — and they have haunted me ever since. It makes me feel that Pine Mountain is really Shangrila, sort of dreaming along the edge of things, but not really getting to the heart of the problem, to do something about it. I don’t think that I shall ever really be content here again. One can’t rest, so close to that utter need, and powerless to act.

The Brashears’ home is in the real wilderness, over an impossible road which really frightened us in some places, over a mountain, and down in a lonely head of a hollow. It is a real country home, and they were pioneers. The old people came there when they were young, more than fifty years ago, and they built the house there in the wilderness. They own something like 500 acres there. Grandma is quite a character — quite talkative — she started right out to the kitchen saying they’d have to make a fire and get some dinner “for these here folks” — but we couldn’t stay. Grandpa is quite deaf, and rather hard to talk to. Mrs. Reynolds is a cheerful young woman, about our age I should think, and their two children were very well cared for. The girl, Douglas’s sister, reminds me of F.

This was our last real visit, although we stopped in several places, and came past the homes of other of our children, one of them the Collier Scott home, where Grandma Scott takes care of the grandchildren of her son and daughter, both married with families and both separated. We passed the grand home of Lonnie Lewis, whose father owns all the land on Lewis’s creek, a real plutocrat….[etc.]

Had Alice Cobb been able to look down the road, she would have seen that many of these children who were given a chance took it and their accomplishments were extraordinary. One of those, Allen, never learned to dream “along the edges of things” at Pine Mountain, but spent a lifetime of engagement, giving back to communities of need as did the Brashears, the Reynolds and the Scotts. Alice Cobb could have learned from Allen.

Allen left for the School several weeks after his sister, Audrey Long, was born on August 22, 1947, the last of the four Long children. “I was told what day I would be going to PMSS. My father hired someone to take us. That was the driver, father, and me. My mother had packed my suitcase. I did not have many clothes.”

The following is an excerpt from his mother’s memoir (with Allen’s notes in parentheses):

The school was established several years before (34 to be exact). The man that gave the land gave several acres. They raised a lot of food, also had cows, chickens. (She did not mention the hogs). You had to work part time. The cost was $10 per month. The students did not leave the school. They had everything there. Several went from where we lived. (Vicco) High School was too far for them to walk in the winter months.

One of Allen’s first jobs at Pine Mountain School was working in the Print Shop from September until the Christmas break. He recalls that one of the two scars on his finger (the first from a hatchet he purchased) was the result of catching his finger in the gears of the printing press while his fellow student, Ray Bird, was running a proof of an article.

Other campus jobs that Allen remembers were at the Barn and the Woodworking Shop, “mainly helping to paint.”

Two things impressed [me]. One was the swimming pool. I had never seen one before. The second was Far House where I was to stay and sleep. I had only stayed away from home to visit cousins. Here was a room full of strangers. My father said for me not to be homesick but to get out and do things. He did not know how busy we would be. I [was] never homesick.

No one except my father had ever seen the place. In October of my [first] year, one of my brothers [brought] mother, dad, and four kids to see the place…Mama had a picnic basket and we ate under the trees by the stream below the swimming pool.

….I love PMSS and am sorry that my father became ill and could not come back. Years later I found out about the Alumni meetings and sent donations. All of my children have been here and they loved it, especially my daughter from Asheville [North Carolina]. My three [grandchildren?] like it too.

ALLEN LONG: PMSS Board of Trustees

On March 24, 2014, Allen resigned from the Pine Mountain Settlement School Board of Trustees. He served as the Chairman of the Board for some seven years and guided Pine Mountain through some of the many dilemmas small non-profit institutions experienced during the economic downturn of the 1990s. His thoughtful and gentle guidance will be sorely missed by all.

Allen’s note to the board follows:

Hello All:
This is one of the saddest times in my life. I must resign from being on the Board of
Trustees of Pine Mountain Settlement School. Age has caught up and passed me.
My driving is restricted, although my children have offered to drive
me. I have found that when I go someplace, it takes longer to recover.
I want to thank the Board for the wonderful work you are doing and for the work of
the past two years. Linda Reeves has done a fine job. I know no one who works
harder than Larry Shinn. I also want to thank all those who worked with me
on the Board of Trustees for many years.
I have loved PMSS since 1947 and will continue to love it until my death. I will give
what I can contribute each year.
My prayers are with you,
In the Spirit of Pine Mountain,
Allen E. Long

The tributes from members of the Board were immediate. Some are shared here:

” When I think of “the Spirit of Pine Mountain” a number of PMSS graduates come to mind—and you are always on the short list! You have cared for Pine Mountain like you have your church flocks over the decades of your vocational and avocational careers. Your loyalty, hard work, insightful historical knowledge, and your pure devotion to Pine Mountain all come to mind as I contemplate what it will be like to serve Pine Mountain as a trustee without you at the table. … Allen, you will be missed but also remembered. You will not travel to Pine Mountain but you will be present with us. … Thank you, friend, for all you have given of your time, talent, and resources to Pine Mountain. ” L.S.

“Wow. I too am sad, but then my mind moves quickly to all the memories I have of you AND Pine Mountain. And then I think of all the splendid memories you have OF Pine Mountain. …So don’t be sad. Be jubilant that your path led you to this enduring institution. And be satisfied that you gave it just as much, if not more, as it gave you. … Thank you so much for your service. ” C.B.

“We will miss you, Allen. … Your sense of humor and extraordinary humility ‘grounded’ the Board when we really needed it. As you presided at our meetings, I felt a friendliness and openness to all that I hadn’t experienced there, before. You helped bring us back to center, and we have prospered there, because of your service. … With much love and prayers for glorious days ahead for you.” C.P.