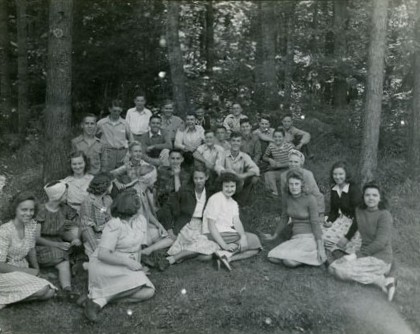 Beatrice and Roxie Gambrel were sisters who came to Pine Mountain Settlement School (PMSS) from Twila, Harlan County, Kentucky, in 1946. (Earlier, an older sister, Viola, attended PMSS in 1940-1943.) As of 1946, the Gambrel family consisted of 11 children. The family lived in a rented frame house heated by coal and lighted by electricity, with water supplied by an electric well. Beatrice and Roxie’s parents were Bessie H. Johnson Gambrel (b. 1897) and Frank James Gambrel (1894-1967), who supported the family by working in the mines.

Since 1935, PMSS required students to write to their parents at the end of each term, describing their studies, how they feel they have performed, and how they might improve on their shortcomings. The letters were usually accompanied by a letter from the School principal. The letters provide an insight into a student’s days, as they adjust to living in a dormitory, and learning the School’s rules, traditions, and culture. Much of the information about the sisters come from their self-evaluation letters, as well as their applications to become PMSS students.

Beatrice Gambrel had attended grades 1 through 8 at a school in her hometown of Twila before she transferred to Pine Mountain Settlement School. Her student file in the PMSS Collections contained two handwritten self-evaluation letters,four pages each, to her parents. In her letters, she describes her courses, expressing frustration with civic and appreciation of English class in which she learned grammar, letter writing, and to answer want ads. She attended the English Club during which she practiced public speaking and joined in spelling bees. Her favorite classes were sewing and home nursing. She states that the event she enjoyed the most was May Day.

At home, one of her duties was washing dishes. Whether or not she would have selected this job at PMSS, dish-washing was her work assignment. She wrote in a December 19, 1946, letter to her parents, “The only thing that I don’t like about it is that you have to work three (3) times a day and if you don’t watch out you will break about half of them and I have to pay a breakage fee.”

Beatrice submitted writings to at least two issues of The Pine Cone, a PMSS student publication. In the November 1948 (page 4) issue, she joined other students in sharing a memory of Mountain Day.

On the way to the tower you could hear some asking, “How far have we come?” or “How much longer will it take?” You could see the couples coming slowly, with the boys usually pulling the girls. In a few cases, though the girls were trying to pull the boys. Poor girls. — Beatrice Gambrell

In her article “Home Economics,” in the February 1949 Pine Cone (page 7), she wrote about sewing ball gowns and fundraising for Junior-Senior Banquet.

During this semester Home Economics has been one of the most important classes to the girls. Since the Ball is just around the corner, the girls have been trying busily to get their formals ready. ….

We juniors have been carrying on a very important job lately, raising money for the Junior-Senior Banquet. So far, we have been making cake and candy and selling it. ..

Roxie Marie Gambrel began at PMSS in the ninth grade after attending grade school in Twila for eight years.

The PMSS Collections holds a student file for Roxie Marie Gambrel, including her application and four of her handwritten self-evaluation letters to her parents, each three to five pages long. As a student living in Old Log at Pine Mountain, Roxie must have enjoyed a break from her home duties of “minding babies” and mopping floors. However, she could not escape housekeeping, as her work assignment was cleaning Laurel House under the supervision of Miss Binford.

According to her letters to her parents, she struggled with some subjects, such as mathematics and science, but held her own in other subjects. She writes about her English class, “I have learned to use English better since I came over here….” As for table manners, she “learned to take three bits of the food that I don’t like and I have learned to like a lot more food such as greens….” In co-op classes, she “learned to keep books [and] to take responsibility in the co-op store.”

Roxie summarized her PMSS experience by writing, “[The PMSS teachers] are the kind of teachers I should have had all through grade school. Then maybe I would have a little more education that I have now. But it is my fault that I didn’t study.” Her favorite experiences at PMSS were the Nativity Play and the Mummer’s Play and the good times she had going to movies, parties, and classes with the other students.

The year 1949 marked the end of the boarding school at PMSS, which transitioned in 1950 to a Community School, a consolidated elementary school program based on the PMSS campus. Therefore, Beatrice and Roxie could not continue at Pine Mountain.