Consumer Cooperatives date back to the early weaving history in England. It is not surprising, then, to find them readily welcomed by Pine Mountain Settlement School, not only for their English heritage but also for their cooperative Settlement ideas. In a cottage in Fenwick, a community of weavers in East Ayrshire, England, a historical document tells of the establishment of what is believed to be the first instance of a “consumer cooperative.” They called themselves the Fenwick Weavers’ Society. Collectively buying and selling grain at a discount within the community, the weavers were able to better the market prices and to begin to pay dividends. By 1844, the co-operative idea had proliferated in England, and a formalized model of a co-operative was established called the Rochdale Society of Equitable Pioneers. It formed the prototype of basic principles on which co-op stores operate today.

The idea of a co-op resonated across the early administrations of the Pine Mountain Settlement boarding school curriculum and by 1944 it had caught the attention of Kentuckians. An article by Courier-Journal Staff Writer, Sol Schulman, noted that the Neighborhood House in Louisville, a Settlement Movement institution with close ties to Pine Mountain, had a thriving co-op. Schulman describes it as having fifty members across a broad spectrum of society. While the early model was an agrarian one and especially the local grower’s markets comprised of growers and marketers. co-ops readily saw a benefit in the cooperative which allowed them to borrow money on their crops which could then be sold when prices were “more attractive.” This cost-benefit had great appeal in rural areas and particularly in counties like Harlan, hard hit by the Depression and the boom-bust economy of coal. Further, Schulman explains the appeal

[was a movement to be celebrated]

Through such organizations growers could also buy equipment, some of it for joint use; conduct campaigns to establish uniform grading of their products, and study methods of packaging.”

Schulman would be amazed at how close Pine Mountain School’s attention to these ideas has carried forward. No longer a part of a curriculum, the ideas developed by co-ops have found their way into the programs of the School. Schulman was intrigued in 1944 when his attention to co-ops turned to Pine Mountain Settlement where the idea of co-ops had found a new emphasis as part of the progressive movement and had also captured the attention of education.

The Harmon Foundation, a national philanthropy, also noticed the PMSS innovative school program and sent two noted filmmakers, Virginia and Ray Garner, to Pine Mountain to record their co-op program. The Garner color film was distributed broadly and even found its way to China where it was translated and shown in several venues. Black and white stills from that endeavor are in the PMSS Collections photo archives.

However, Pine Mountain Settlement soldiered on as did co-ops across the country.

One of the most innovative programs at Pine Mountain, the Sophomore Consumer Cooperative curriculum met several standard educational objectives including academic and industrial education. The program grew from an original idea put forward by Angela Melville who came to the School in the early years as a fundraiser and office worker from 1916 to 1920. She later briefly served as Principal and then as associate director from 1928 to 1930 and was a long-time member of the Pine Mountain Settlement School Board of Trustees. She came with masterful skills.

The idea of a Consumer Cooperative is not far from the idea of a consumer cooperative bank, now called a “credit union,” and Angela Melville was quick to see the similarities and how those similar structures would help students to later manage their finances. Her early work was so effective that it was integrated into her model for credit unions for which she later gained national recognition. Following her work at Pine Mountain Melville became recognized for helping to establish and standardize guidelines for business management instruction and credit unions across the United States.

From the origins in a small weaving community in England to a worldwide idea to a small weaving community in the mountains of Eastern Kentucky, the consumer cooperative idea survived its opposition and is now a well-established concept and an excellent educational model. The ideas put forward by the Rochdale model, and instituted later by Melville in her curriculum at Pine Mountain and in her credit union work, no doubt resonated with growing national trends in that direction. However, ideas have a way of getting side-tracked where money exchanges hands. Consumer co-ops were among many cooperative ideas that went astray following WWII.

Schulman’s article appeared one hundred years out from the founding of the Rochdale model. In 1944 opposition politics saw the Chicago Morrison Hotel, the location of the traditional co-op convention, taken over by a new group, the League for the Protection of Private Enterprise which became a coordinating group opposed to co-ops and who declared that

For the 1938-1939 school year a small booklet, Consumers’ Cooperative Store was developed for the Pine Mountain Settlement School curriculum. It acted as a guide for students who became members and for the community that also participated. 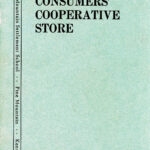 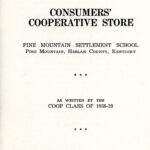 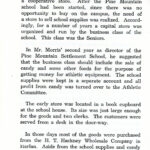 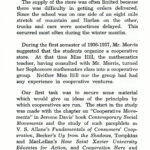 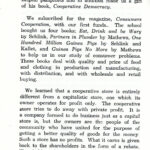 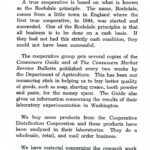 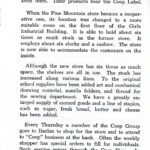 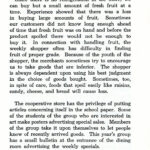 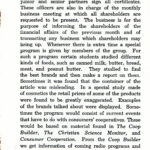 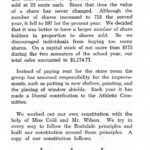 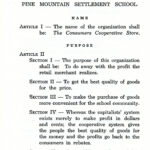 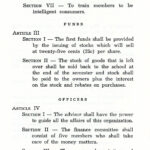 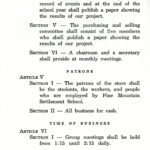 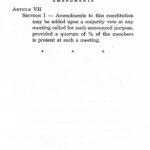 In a class hand-out, the Consumer Cooperative class objectives were described in the following manner by the teacher (not identified), The instructor’s edits to the class hand-out may be seen in the copy.

(Handwritten note at top of the page: “Teacher’s statement of objectives for the group.”)