Mary Rockwell Hook, architect of many of PMSS historic buildings, died on her 101st birthday in September, 1978.

Chapel was re-roofed, and a window replaced.

A folding door was installed at the entrance to the Audio-Visual Room in Laurel House.

PMSS was included on the “Federal Register of Important Places”.

June 25 — the 50th wedding anniversary of Brit and Ella Wilder was celebrated with a pot-luck supper at Laurel House. 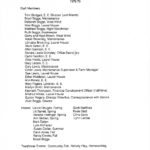 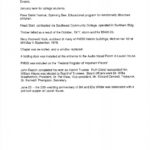