John H. Deaton and his wife, Faye Trail Deaton, were active members of the Pine Mountain Settlement School (PMSS) Alumni & Friends in the 1970s and 1980s. Both were born in Harlan County, Kentucky, and attended PMSS in the 1940s as students during the boarding school years.

Signs of John’s participation in the School’s extracurricular activities can be found in several student publications. Besides playing a part in The Moonstone play in 1944, he also contributed to the student publication, the Conifer of May 1944. His poem titled “Despair,” describes a coal miner’s troubles. According to the Conifer, “This poem won Honorable Mention in the National High School Poetry Contest and is to be published in the Annual Anthology of High School Poetry.” His narrative, “Stolen Pleasure,” recalls the time he and friends took a forbidden dip in the local pond.

“Deaton’s Dilemma,” written by Jack Martin for the same Conifer issue was a tongue-in-cheek description of John’s working as “head man of the [School House] paint crew” and “fighting fire on Gabe’s Branch.”

While a student at Pine Mountain Settlement School, John Deaton contributed to the literary journals of the School called the Pine Cone and the Conifer. In 1944 he submitted the following poem to the Conifer as a tribute to the founder of the School, William Creech: 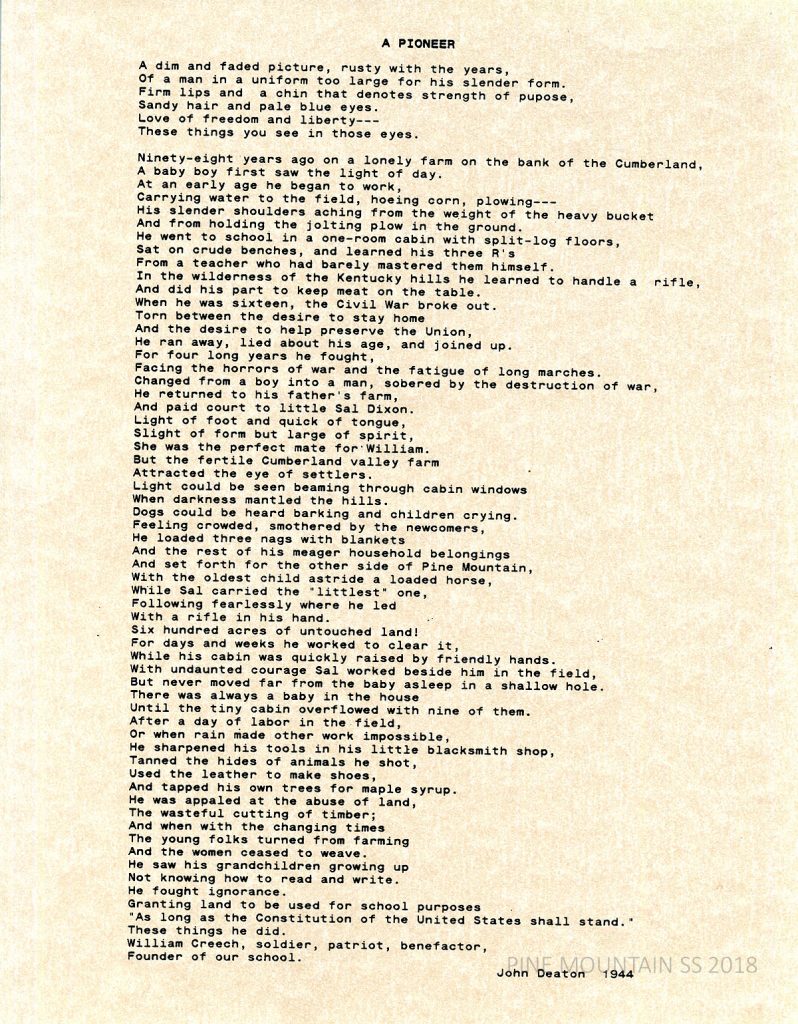 After John graduated from PMSS in 1944, he spent the next two years in the United States Navy, then worked two years at the Blue Diamond Coal Co., in Leatherwood, Kentucky. He was back with the Navy in 1948, where he remained until 1973. In a resume that he prepared for the PMSS Board of Trustees, c. 1970s, he wrote:

My naval career followed a normal promotion pattern for an enlisted person. I was appointed Chief Petty Officer in 1955. In 1960 I competed for and was selected for a commission as a weapons specialist. Duty assignments included sea and shore rotation in my specialty. Was serving on the staff of Commander, U.S. Atlantic Fleet Training Command at retirement. Numerous Navy training schools were completed during my 27 years of active duty.

After retirement as lieutenant commander (LCDR), John continued applying the skills he learned in the Navy. Employed by the Morristown (Tennessee) City School System, he served as the Assistant Naval Science Instructor for the Naval Junior Reserve Officers Training Corp until he was 65 years old.

Besides John’s affiliations with veterans organizations and educational associations, he was also president of the PMSS Association of Alumni and Friends and vice-chairman of the Advisory Council in the 1970s and 1980s. He and his wife were frequent visitors to the School’s homecoming events and enthusiastic supporters of the School and its mission. During this time, they lived in Morristown, Tennessee, with their two sons. John has provided the PMSS Collections with an oral history.

John [“Jack”] Henry Deaton was born on September 24, 1926, to Darlean (Darline, Darleen, Darlene?) Archer Deaton and Marvin Deaton, a coal mine “machineman.”  John had at least two siblings: Joanna and Mary Jean. He died on October 17, 2002.