Willis D. Weatherford was the sixth president of Berea College, serving from 1967 until 1984. Consequently, he also became a Trustee of the Pine Mountain Settlement School. This arrangement was due to a close and cooperative relationship that both schools had since 1949 in which Berea “provides guidance and counsel to Pine Mountain through four trustee positions and in other appropriate ways.”

Dr. Weatherford’s excellent qualities and skills greatly benefitted Berea College and also were applicable to the needs of the settlement school. A May 24, 1996, article in The Courier-Journal described him as “…a man of quiet, reflective dignity and a forceful advocate for [Berea College’s] commitment to Appalachia, to poor but deserving students and to liberal education.” One of Willis Jr.’s most important accomplishments at Berea was in the area of fundraising, having increased Berea’s endowment by more than $40 million during his tenure.

Pine Mountain Settlement School records show that Dr. Weatherford was Chairman of the School’s Board of Trustees in 1973 and 1974. He became Honorary Trustee in 1979 and continued his association with PMSS at least into the 1980s. According to the 1983 Homecoming Report, he joined in a special discussion of the School’s future and also gave a Chapel talk: “Dr. Weatherford talked about Pine Mountain’s past, its uniqueness and its time as the most progressive school in the country….[He] spoke of the early ‘workers’ and wisely remarked that ‘they gave, not with pain or complaint, but with joy.’ ”

His father’s work was most likely his greatest inspiration and influence. Willis D. Weatherford Sr. was a pioneer in Appalachian development, youth work and race relations. Also, Willis Sr. was an effective Berea College advisor and trustee for 47 years.

Before coming to Berea College in 1979, Dr. Weatherford was Associate Professor of Economics at Swarthmore (PA) College for 17 years and was Dean of Carleton College in Northfield, MN, for two years. He became President of Berea College in 1967, succeeding Francis S. Hutchins (1939–1967) and followed by John B. Stephenson (1984-1994), then Larry D. Shinn (1994-2012). All have been members of PMSS Board of Trustees. The current president, Lyle D. Roelofs, continues in that tradition.

Dr. Weatherford’s volunteer and research work took him to Malaya, India and Europe. Of special note was his work with American Friends Service Committee which included Refugee Relief in Europe for three years during and after World War II. From 1961 to 1965, he was director of the Volunteer Assistance Division of Volunteers in Service to America (VISTA).

Throughout his life, Dr. Weatherford was active in many academic, service and religious organizations. In addition to serving as a member of the Board of Trustees at Pine Mountain Settlement School in the 1970s, he was also a trustee of the Frontier Nursing Service, Warren Wilson College, YMCA and the American Association of Presidents of Independent Colleges and Universities. 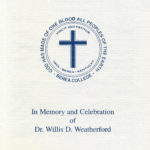 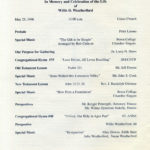 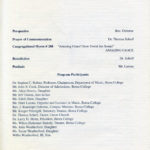 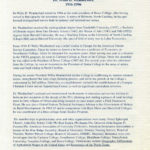