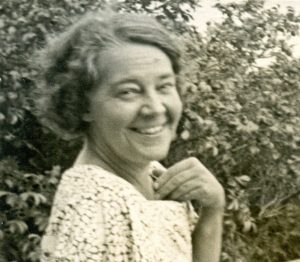 May Gadd, a cheerful, energetic English lady, was devoted to keeping country music and dance alive and done properly. When she relocated to America, she became known as America’s English country dancing expert.

Miss Gadd had been sent from England to America in 1927 by the English Folk Dance Society. This opportunity was a turning point in Miss Gadd’s life and career with America becoming her newly adopted country.

Miss Gadd was assigned to assure that the standards of the English Folk Dance Society were applied to its American branches, which she did with great proficiency, first as an organizer and teacher, then as the head of the New York City branch. In 1939 she became the first national director of the organization and remained in that position for 35 years. During that time she changed the society’s name to Country Dance and Song Society of America (CDSS) to reflect her interest in Appalachian dances, sponsored seasonal festivals that regularly attracted hundreds of dancers and established folk dance clubs at local high schools and colleges. Also, she was often consulted by choreographer Agnes de Mille on dance steps for the musicals Oklahoma! and Brigadoon. During her long tenure with the Society, she transformed it from a loose federation of English Society branches into an autonomous, not-for-profit, American organization.

May Gadd became a regular visitor to Berea, Kentucky, where the CDSS had established one of its several folk dance centers, Eventually, she led Berea’s Christmas Dance School. She also came to Pine Mountain and other settlement schools several times in her later years.

An article in the November 1948 issue of The Pine Cone, a PMSS student publication, describes one of May Gadd’s visits to the School:

“Four Men Shall Mow My Meadow”

Two very interesting ladies, Miss Averil [Elsie “Ruby” Avril] and Miss Gadd, both prominent in the field of folk-dancing, visited Pine Mountain this past month. Miss Gadd is Director of the Folk-dancing Society of America, with offices in New York. Her folk groups are located all over the United States and Pine Mountain is one of those groups.

Last year Miss Gadd toured the country, giving lessons and visiting various cities. She thinks folk-dancing is a wonderful thing, and that by dancing one develops a sense of rhythm and lightness of carriage from the sheer love of doing the dances.

During the classes held for us Miss Averil played her violin as the accompaniment. In one of the senior classes there was overheard the comment that “it was delightful to watch the interest and enthusiasm put forth by the students.”

If anyone wishes to get some expert direction in folk dancing, he should visit the Christmas School at Berea, where Miss Gadd plans to be at that time.

Miss Averil, who furnished the music for our dancing and taught us many folk songs, returned to London the first of this month. The English are fond of our American dances, and Miss Averil is going back to teach our songs and dances to them.

After leaving Pine Mountain Miss Gadd and Miss Averill went on to Stuart Robinson to give dancing instructions there. After they left, all of Pine Mountain felt deeply grateful to them for having given us two delightful days of song and dance.

On April 13, 1960, Burton Rogers, PMSS Director, mentions one of Miss Gadd’s visits to Pine Mountain in a letter to Arthur Dodd, a former PMSS staff member living in Ganado, AZ:

Last night Miss Mae (sic) Gadd came over with a party from Hindman for a regular dancing party here. We were talking of you and she inquired of your location. When I told her she was surprised because she had been in your vicinity and was expecting to be again …. It occurred to me that you might like to know of this possibility and possibly would be interested in getting in touch with her. She seems to have a keen memory for people and is certainly very spry and active in her field.

Miss Gadd and her folk dance associates, Lily Conant, Louise Chapin and Dorothy Bolles, and their benefactor, Mrs. Helen Osborne Storrow, established one of the most long-lived centers of English folk dancing, Morris and sword dancing for girls — the Pine Tree Camp on Storrow’s property at Long Pond near Plymouth, Massachusetts (later known as Pinewoods Camp). There, Mrs. Storrow, an early Girl Scout leader, founded the First National Girl Scout Leaders’ Training School. May Gadd was often a teacher at the camp.

Pine Tree Camp’s history as part of the many Girl Scout camps that Storrow helped to establish and later as a center of English Country Dancing holds significant importance for Pine Mountain Settlement School. Both English country dance and Girl Scouting were central to the young girl students’ education in the early years of the School.

May Gadd, interviewed by Mildred Buhler, c. 1950, spoke about the Country Dance Society. (For audio, go to timeline on www.cdss100.org. Photo courtesy of CDSS Archives.) [may_gadd-crop.cdss.jpg] 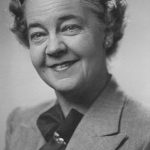 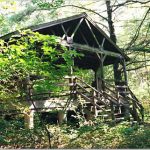 May Gadd was born c. 1890 in Chichester, England. Her father was Edward John Gadd of London, England. May Gadd was still dancing and teaching until 1976, three years before she died on January 27, 1979, at the age of 88.

In the same year of May Gadd’s death, the Country Dance & Song Society established the Gadd/Merrill Fund to provide funds for special programs that advance the aims of the Society. It was named for May Gadd and Phil Merrill, a music director for many years who inspired numerous musicians and dancers. The Fund is used to grant scholarships for aspiring leaders, musicians and teachers of English or American Dance at the society’s summer program.

GALLERY: May Gadd Article in 1938 Issue of “Notes from the Pine Mountain Settlement School” 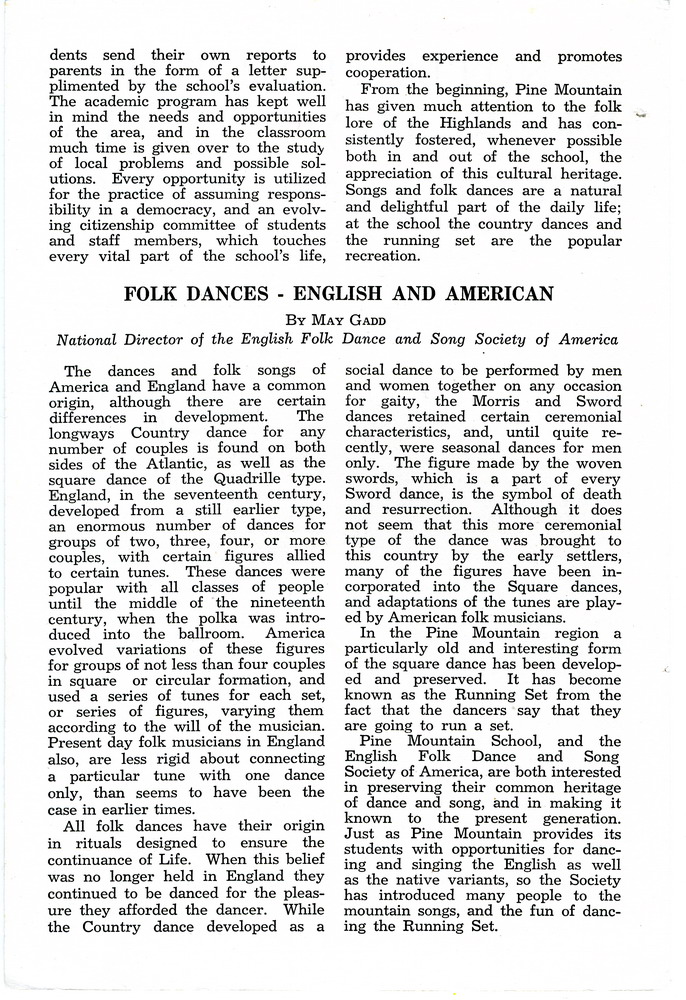