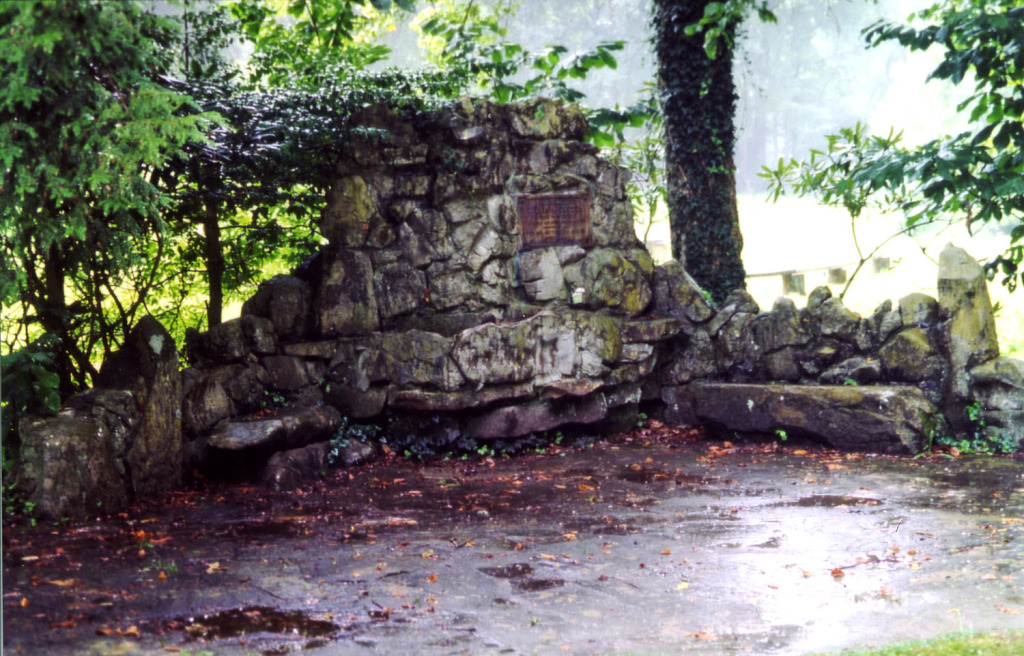 Constructed in 1929[?] the William Creech Memorial Fountain is located just opposite the Girl’s Industrial Building [today, known as the Plant Center]. It is a stone structure with seating to either side of the main drinking fountain and basin. Built as a memorial for William Creech, one of the founders of the Pine Mountain Settlement School, the fountain has been a point of discussion through the years.

Apparently, the first construction of the fountain had some features that the early Advisory Board found aesthetically unpleasant and there was an attempt to reconstruct the fountain to remove what was described as a “countenance” that needed some attention.

Transcribed below are correspondence between Darwin D. Martin (Member, PMSS Board of Trustees 1920-1933) and Katherine Pettit, and other Pettit letters concerning possible changes to the fountain. Included is a Pettit letter asking advice of the School’s original architect, Mrs. Mary Rockwell Hook. Several of Martin’s letters describe his attempts to solicit assistance from the noted architect, Frank Lloyd Wright.

Dear Miss Pettit:
In a letter from Mrs. Holton [Celia Cathcart Holton] dated May 4th, she impresses upon me the propriety of changing the William Creech Memorial Fountain while you are still at Pine
Mountain. I had not thought of the matter in that light. I had told her I would ask Frank Lloyd Wright to design the fountain but Mrs. Holton thinks the expense would be considerable. It is not my idea, I think it would not be Mr. Wright’s, to do anything elaborate or too dressy. We would, however, have the benefit of Mr. Wright’s artistry in lines.

To be sure the present offensive features of the fountain can be eliminated by any stone mason, removing some stones, and if necessary, putting in some others to merely make the fountain commonplace. I would approve doing this which will remove all cause for urgency, and when we get a design that the Board all approve, the further work can be done at a more convenient season.

My dear Mrs. [Mary Rockwell] Hook:
You have not forgotten the fountain, have you, and the part you were going to play in the reconstruction or the change that you and Mr. Martin suggested. Miss [Margaret] Motter, the principal of our school, and some of the other teachers have been so anxious to have this change made, and every time they speak to me about it, I have to tell them of you and your interest and that you were going to tell me just how to do it. Miss Motter suggests that all the top be taken off down to the tablet and then with much planting that it may be all right. Some of the things we have planted are growing very nicely. Will you tell us just what you would like to have done about it and then Miss Motter or Mr. [Hubert] Hadley will have it done after I am gone.

I am so glad you think of coming this spring. Open House was looking lovely this morning when I went up there to take the Hadleys who are to spend a fortnight there. You know how Miss [Ruth B.] Gaines‘ finishing touches add to anything and they were all there all over the place. Be sure and get here in time for the Pageant and May Day.

Dear Miss Pettit:
A letter from Mr. Martin says he thinks a monthly report from Mr. Hadley would be highly proper for at least all Trustees. For the Advisory Board too if the Trustees think so. Personally, I think it may just as well be limited to the Trustees. I asked him whether he would be willing to have such a report sent out from his office, and, as he does not reply to that question, I think it should be taken care of at the school office.

I told him I had written Mary Hook at least three times during the last two years about the fountain. I think she wants something to be done about it, but does not want the responsibility of doing it. I told Mr. Martin I was willing to assume the authority, – was he?, – of directing you and Miss Melville to make whatever changes in the fountain you saw fit. To that, he says, ‘Frank Lloyd Wright will pass through Buffalo very soon, en route to or from Princeton University, where he will deliver a course of lectures on Art, Archaeology and Architecture. This should qualify him to design a fountain. I will ask him to do so and believe he will though his muse does not respon[d] “off the bat”.’ Today I am writing him that I feel it is not necessary to go to the bother and expense of asking Mr. Wright to design a fountain, as the one we have can easily be changed sufficiently so as not to be objectionable, by removing the stones which horribly resemble a countenance and substituting others which will simply allow the passage of the water; that you are eager to have the work done before you leave, as Mr. Hadley will be busy with many things and may not get around to such a detail as this for months. I shall ask Mr. Martin to write you directly. This business of relaying questions and answers through me is a cumbersome method which requires much time. It is not always possible for me to write the letters immediately, much as I should like to.

How long do you plan to be at Pine Mountain, Miss Pettit? Mr. Hadley still plans to come June first, does he? I hope you can stay long enough to help him get settled.

We are all quite well. I have been very busy house cleaning and shall finish this week. Last night I lifted my mind from the hum drum of too much domesticity by going to Springfield to hear the Westminster Choir, an organization of forty-five men and women who sing A Capella and without notes; their programs are always
sacred and very classical, going back to Palestrina, who was practically the father of modern church music, living in the sixteenth century. Such music as that group does make! It is like a human organ upon which the director plays at will.

Hoping that things are going well for you, I am,

My dear Mr Martin:
Thank you for your letter. I do not feel that it is necessary for me to do anything about the fountain before I go. I can just leave it to Miss Motter and Mr. Hadley. Miss Motter is very much interested in getting it fixed and all that is necessary is to move the top part, and cover it with vines.

Dear Miss Pettit:
Frank Lloyd Wright spent Sunday with me. Will you send me the ground dimensions occupied by the William Creech Memorial Fountain as a guide to what can be done for a similar space? Will you send also fore and aft and right and left close-up photos of it as is and also a close-up photo of the exterior wall of the Chapel, showing the texture of that stone with a view to perhaps substituting it in the fountain?

I am sending Mr. Wright a copy of Miss Melville’s good letter on May Day to inspire him with atmosphere. As she kept no copy of it, I enclose one.

Dear Miss Pettit:
Answering your post-card of May 23rd. Certainly Mr. Hadley will carry on at all points where you leave off, so it will be perfectly in order for you to refer to him my request for photos. Mr. Wright, you know, will not move fast.

I hope before many weeks you will pay the school a visit and see how things are progressing. Miss Melville, of course, will not be available, nor will Mrs. Holton for the coming year.