Hubert Hadley was first introduced to Pine Mountain Settlement School when he received a letter from Angela Melville, PMSS Interim Director, dated September 12, 1929, while he was Superintendent of Carcassone Community Center in Gander, Kentucky:

Miss Jaspar, who is visiting us has told me about your interest in industrial work and what you are doing along those lines at Carcassone. We should very much appreciate a visit from you at Pine Mountain where from the beginning we have stressed industrial training as well as academic work.

Hadley could not leave his work at Carcassone at the time, but he must have eventually made that visit. In a February 20, 1930, letter, the president of the PMSS Board of Trustees offered Hadley the position of PMSS Director “for one year beginning June 1, 1930, with the salary of $2,400, the free use of the Zande House, the living of yourself and family and if desired two months vacation with pay.”

“Pine Mountain, owing to the devotion that has been given to it in the past seventeen years, is now an entity.” was the opening sentence in a one-page letter sent from the School “To the Friends of the Pine Mountain Settlement School.” Dated May 23, 1930, the letter served to announce the retirement on June 1st of Miss Katherine Pettit, Director, and Miss Angela Melville, Associate Director, and that both were continuing their service to the School as members of the Board of Trustees.

The letter went on to report that Mr. Henry Hubert Hadley was employed as the third director of the School since its founding. Mr. Hadley’s background was described as follows:

We are fortunate in having secured as director Mr. Henry Hubert Hadley, a Texan. Mr. Hadley holds an M.A. degree from Greeley Teachers College in Colorado, and has taught for ten years, the last two of which have been spent in the mountains of Kentucky, as executive of the Carcassone Community Center of Gander. Mr. Hadley is a fortunate choice for Pine Mountain in his wife and two young daughters as well as in his ability and character.

This was the first major change in administration at the School. Mrs. Ethel de Long Zande, one of the School’s founders and the first director, had died in March 1928 and Miss Katherine Pettit, also a founder and co-director, continued as director, along with Miss Angela Melville as associate director, until Mr. Hadley was hired. The letter ended with this positive statement:

We look forward with confidence to his work, and ask for Pine Mountain under his direction a continuance of the friendship which you have ever given our beloved school.

Hadley accepted the position and arrived at Pine Mountain at the end of May 1930. 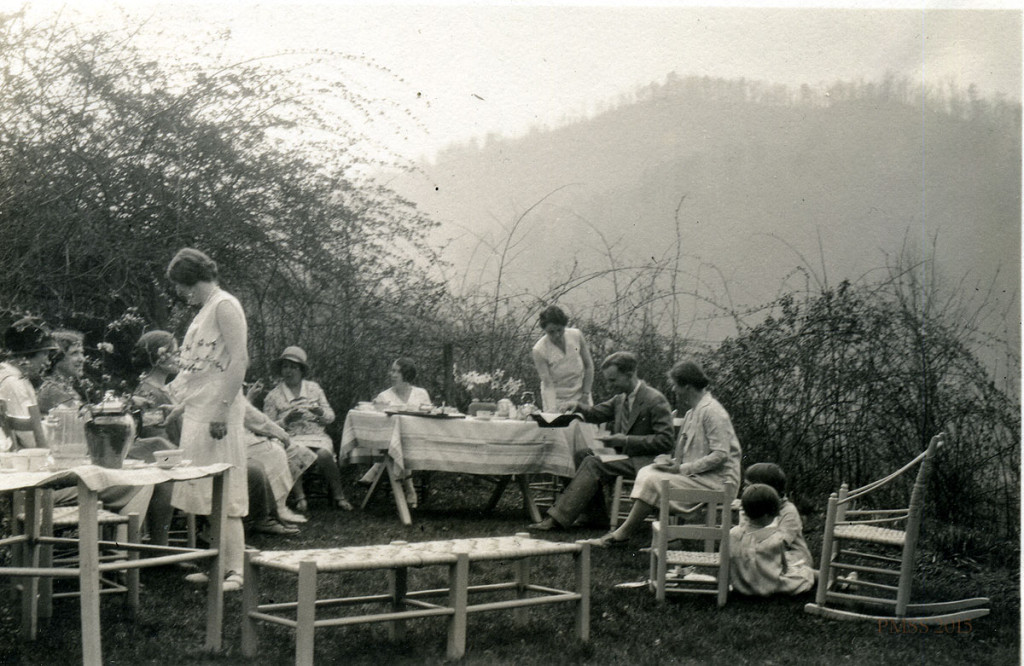 As of April 1931, he returned to Carcassone Community Center as an Executive, with Mrs. Alice Hadley as Associate Executive. At that time, Evelyn K. Wells, PMSS Acting Director, wrote to him that

I think the school has stepped ahead considerably this last year in many ways and your part in some of our improvements is very clear to me….Won’t you tell Mrs. Hadley how aware I am of the evidences of her care of Zande House? It seems to me that the grounds are in beautiful shape.

According to further correspondence from Hadley, by January 1939 he was County Superintendent of Schools in Colorado Springs, Colorado.

A letter from the Hadleys’ daughter, Dixie (Hadley) Teague, sent to Pine Mountain Director Robin Lambert and received by her successor, Nancy Adams, gives more details about the family experience at the School. The envelope was postmarked on September 11, 2000.

The following is a transcription of Teague’s letter, slightly edited.

Really thrilled to receive your letter but saddened to learn of all the fires — especially Burkham — never heard it called that. I do not know what bldg was Far House.

… We had been at Carcassone before going to Pine Mtn. so you can imagine how modern Pine Mtn. was in comparison. Our beautiful house was made of stones cut by [an] Italian stone cutter — a Mr. Zande. He also cut stones for the Chapel. We heard it was all one stone for both buildings. Our house had hardwood floors (I think), French doors, bedrooms upstairs and even a bathroom up there. The woodworking class made Mother a beautiful cherry wood table — but it was too pretty to use.

Lots of native shrubs & flowers. Maybe one of the students got paid to do some housework to make money for schooling.

My sister & Daddy sang a duet at Vespers one night – “Whispering Hope.” we learned to swim at the pool. That does seem advanced for 1930.

My 1st-grade teacher was Miss Mary Ann Semones. She was also at Carcassone with us.

Mr. [Boone] Callahan gave me a horn made from some animal horn. Think Mr. Callahan was in charge of the dairy & I thought he was from Denmark but maybe the little horn was from there.

Mother took oil painting classes & we have 3 pictures she painted of our house and local scenery. Don’t remember the art teacher’s name.

I have a small basket. My sister has a larger one & Mother had 3 various sizes. I always thought mine was made just for me but probably bought at [the] Craft Fair. Maybe I’ll just keep on thinking it was made for me.

I have a snapshot of [a] tiny mountain cabin. Mother wrote “Aunt Sal’s House” on it. Some place in the area I guess.

Think I wound up in the Infirmary from eating green black walnuts — or who knows what? At Carcassone my folks would have treated me. Daddy was [the] only doctor in that area which he really was not trained to be. He set broken bones, treated copperhead bites, removed broken glass from one student, tried to keep the locals from drinking water with germs in it. They didn’t see any germs!! Blackey probably had a doctor but that was 4 miles by foot or muleback. No cars.

As beautiful as Pine Mtn. was & all the extra advantages I think Mother may have been happier at C.C.C. [Carcassone Community Center]. She had a servant’s heart — always making dresses for students. One saw a picture of Mother’s sister in a dress she liked so Mother made a pattern and made her the dress. Mother made decorations for school events, etc., etc. and no-one to do housework for her but family.

After we moved to Colo. they got many letters from students — both boys & girls. According to the letters my parents were greatly missed.

They unofficially adopted 2 high school boys at C.C.C. I heard from one in 1984. He & his wife had just been to a reunion at Pine Mtn. I didn’t know he ever went to school there so not sure what kind of reunion it was — maybe for his wife.

Henry Hubert Hadley was born on August 28, 1896, in Ellis, Texas, to Turner S. Hadley and Essie A. Reese. According to an obituary from the American Historical Society of Germans from Russia, he married Julia Alice Gahart (1897-1983) on May 25, 1918. They had two daughters, Dorothy and Dixie. He died on December 24, 1976, in Colorado Springs, Colorado.

Back to BIOGRAPHY – A-Z