Letterhead includes names of Director, Associate Director, President of Board of Trustees, and Treasurer ; anecdote about former student’s 86-year-old grandmother and grandchild ; some improvements in 86 years in schools and playground ; the past year was good with 100-plus students, no illnesses ; electric power plant is under construction ; description of arrival of Diesel engine ; cost to complete power house ; boys’ yearly duties include clearing of fire line, milking Ayrshires ; Commencement play was a historical pageant ; school is in its 17th year ; amounts in school budget, income from endowment, annual pledges ; $30,000 still needed ; signed by Angela Melville ; 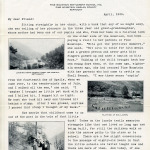 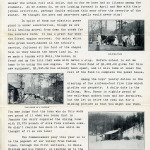 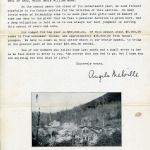 Sitting straightly in her chair, with a back that any of us might envy, she was telling of her pleasure in the three year old great-granddaughter, whose mother had been one of our pupils and who, from her home in a railroad town on the other side of the mountain, had been paying a visit to her parents at Pine Mountain. “Hits got the prettiest manners, ” she said. “Hit sits to table for hits meals like a growed person and never gets hits fingers gormed up and nary a smutch on hits face.” Talking of the child brought back her own young days when, at the same age, eighty-six years ago, she had crossed Pine Mountain with her parents who had come to settle on Shell Branch. “I war three years ‘ceptin’ from the fourteenth day of Aprile, when we come over, to the twenty-ninth day of July, and I walked all the way,” she said. “I ‘member I brought my little pet duck with me and I killed hit, I hugged hit so tight. My aunt she took hit away and throwed hit behind a stump. Atter I was growed, anytime I passed that stump I thought of my duck.”

[Photograph captions:
“Looking Down Greasy from the Medical Settlement”
“Playtime at Big Laurel”
“Goin’ Home From the Store”]

How nearly that childhood came to us out of the past in the tale of that little duck! Today on the lonely trails memories strangely like that one lived so long ago are being built, for still the children walk or ride the narrow paths to the store or to school. There are a few slight concessions to the passage of eighty-six years in that the little schools are better taught now and there are more of them. And today, if one lives in the Big Laurel district at least, there is a real play ground, for the only level piece of ground at our Medical Settle-…

…ment is used for that purpose, and real games are played there.

At Pine Mountain this has been a good year. More than a hundred children answer the school roll call daily, and so far we have had no illness among the students. As we always do, we are looking forward to April and May with their joyous activities, perhaps doubly welcome this year after the severity of the winter. We thought the zero and near-zero spells would never stop!

In spite of them our electric power plant is under construction, though we are still hauling gravel from down the creek for the concrete work. It was a great day when the Diesel engine arrived. Our mules which have grown hoary-headed in the school’s service, faltered at the foot of the chapel hill as they hauled the heavy load in, so we made a tandem with Nell, the horse, in front and up the hill they came with never a stop. Before school is out we hope to using the new engine. Of the Trust Fund of $1,821.08 given for this new equipment, $1,243.86 has already been spent, and it will take at least to rest of the fund to complete the power house.

Among the boys’ yearly duties is the clearing of the sixteen-foot fire line which girdles our property. A daily duty is the milking. Mrs. Burns is rightly proud of her well-kept modern barn and her Ayrshires, but she let us drive the cows out for a milking picture so that you might see them. You may judge that the boys who do this work are proud of it when you learn that in January the dairy supplied the dining room with 12,379 pounds of milk from sixteen cows. We didn’t realize how much it was until we thought of it as six tons!

The Commencement play this year is to be the pageant of our valley from Indian times, through the first settlers, to Uncle William and his family, so leading up to the school of the present day. It will be acted out of doors and one of the scenes will be in front of Aunt Sal’s house, which now stands at the foot of Pole House hill. In this little home she and Uncle…

William brought up their children. One sees her “warping holes” in one of the weathered logs and on the porch are the round stone wheels for grinding corn meal by hand, which Uncle William made.

As the school nears the close of its seventeenth year, we look forward hopefully to its future service for the children of this section. So many lovely words of friendship come to us each year with gifts sent in memory of some one dear to the giver that we feel a peculiar devotion is given here, and a deep obligation is laid on us to use always our best judgment in serving this school of yours and ours.

‘Tis spring! ‘Tis spring!
The lightsome, lovesome thing.
A lilt so pure and clear it sets
One cannot choose but sing.

O, spring! O, spring!
Of your bounty enter in.
‘Till we learn your magic secret
And our hearts keep blossoming.]

One of our workers was called home last month and a pupil wrote to her as we feel moved to write to you, “Am sorrow that you had to go, but I hope you are enjoying the best kind of life.”

Dear Friend Letters 1930 May 23 consists of one 1-page letter that includes the following subjects:

Misses Pettit and Melville to retire June 1, 1930 ; both are members of Board of Trustees ; Mr. Henry Hubert Hadley is new director ; description of Hadley’s background ; list of names of President, Vice-President, Treasurer, Secretary, and Board Members ;gALL 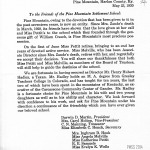 To the Friends of the Pine Mountain Settlement School:

Pine Mountain, owing to the devotion that has been given to it in the past seventeen years, is now an entity. Since Mrs. Zande‘s death in March, 1928, its friends have shown that the love given at her call and Miss Pettit‘s to the school which they founded through the generous gift of William Creech, is Pine Mountain’s most precious possession.

On the first of June Miss Pettit retires, bringing to an end her years of devoted active service. Miss Melville, who has been Associate Director since Mrs. Zande’s death, retires with her, and regretfully we accept their decision. You will share our thankfulness that both Miss Pettit and Miss Melville, as members of the Board of Trustees, will still help to guide the destinies of the school.

We are fortunate in having secured as director Mr. Henry Hubert Hadley, a Texan. Mr. Hadley holds an M.A. degree from Greeley Teachers College in Colorado, and has taught for ten years, the last two of which have been spent in the mountains of Kentucky, as executive of the Carcassone Community Center of Gander. Mr. Hadley is a fortunate choice for Pine Mountain in his wife and two young daughters as well as in his ability and character. We look forward with confidence to his work, and ask for Pine Mountain under his direction a continuance of the friendship which you have ever given our beloved school.

Back to DEAR FRIENDS LETTERS – INDEX