“In October we rented an apartment for eight days to the noted author Rebecca Caudill Ayars and her husband. At that time the University of Kentucky Southeast Center in the town of Cumberland, her birthplace, observed a special Rebecca Caudill Day with displays, programs, and three lectures by her. She met with groups of our children and with two other high school groups in the county.”

Director Burton Rogers then writes about another to whom the apartment was rented: a Health Department worker and his family, “called here in the interest of the crucial vote on the Health Tax. This tax was voted favorably, thanks in large part to the strenuous efforts of Dr. Livengood and other medical and civic leaders.”

PMSS staff members helped fight forest fires during an extreme drought. The School accommodated polls for the November election and December local option election. “With remarkable community effort our precinct voted dry by 104 to 15.” The Nativity play was presented December 15 in the Chapel to afternoon and evening crowds in spite of wintry weather, followed by a reception in Laurel House provided by the Campus Homemakers.

Rogers describes a snowy winter and an almost-dry reservoir caused by the drought.

Alvin Boggs and guest ministers began presenting Chapel services on Sunday evenings, as requested by a group of neighbors. “I have long believed the time would come when our neighbors would be interested in using the Chapel and that it would work best when they took the initiative, as they are now doing. The School is host but the attending congregation are making arrangements and decisions and extending the invitation to other neighbors. I suspect that the past seven years’ quiet work with and through community councils may be … responsible ….”

Younger brothers of a student who “received a native citation for courage and judgment in saving a shipmate’s life …” proudly displayed the citation at hot lunch.

Page 2 of 2
Friday night folk dancing has resumed. Mr. Workman is starting after-school craft classes (leather work, pottery, metal work and weaving) with Mrs. Patterson and Mrs. Campbell as volunteer helpers. The School entertained a special conference of college students and staff with participation of the Council of the Southern Mountains and an active presence of the President’s Appalachian Regional Commission and the White House Special Projects staff.

Bonnie Huff, one of the 9th grade student participating in the WHAS Soil Conservation Essay Contest, joined five other county school students to read from their essays at the Harlan Kiwanis Club.

Ruth Boggs, a PMSS worker, has strengthened the quilt project of the Community Homemakers and Mr. Boggs teaches woodworking.

“More than ever we must strive to be the agency to put needy neighbors in touch with sources of assistance or solutions to problems to the extent that these may be available. … Acute needs are now, but effective new assistance has not reached our community yet.” 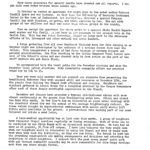 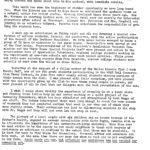 Sketches: Man standing near a large pine tree looking toward a mountain range; two children looking at a poster on the wall.

“In the past several years local leaders have become keenly aware of regional needs and of their part in seeking solutions. Still more encouraging is the growing realization of the nation as a whole that the tragic inadequacies of the Appalachian region do not constitute a local or regional problem alone, but very definitely concern the welfare of the entire nation.

I am certain that the Pine Mountain Settlement School is much more than an observation post in this struggle, not just to relieve distress, but to find solutions to enable people to get on their feet and successfully carry on themselves.”

Rogers continues, describing PMSS’s services to community and region and continuing efforts to find ways to effectively deal with “individual and family needs and social and economic wrongs.” An example is education and PMSS’s cooperation with the public school system.

PMSS has addressed the need for after-school work for community youngsters in a “youth labor corps” project, including bee-keeping and market gardening.

Page 2 of 2
Sketches: Small child seated on a low bench is peering closely at an object in her hands; A man wearing an apron and a little girl stand at a table; An older boy tosses a ball towards a group of small children.

Rogers describes the success of the experimental “Little School,” mostly due to the volunteer teenage aides, and reports that the Trustees have approved an expansion of this service to an entire year of pre-school classes plus another session next summer.

Rogers concludes with appreciation of gifts from friends of PMSS and asks for assistance from others who haven’t given yet. 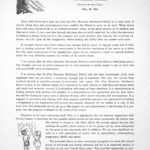 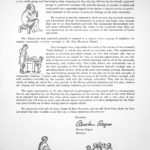 Below Fold, Right Side
Sketch: Pioneer man stands beside a small tree and faces a range of mountains.

Rogers’ “Dear Friends” letter begins with a quote from William Creech, the donor of PMSS’s land, and an introduction to “this brief glimpse of some of ‘our’ projects.”

Below Fold, Left Side
PMSS’s projects resembles the “projects cited in recent Economic Opportunity Act proposals as critical needs of the Appalachian area.”

Rogers states that the help of donors will enable the School to continue the “youth labor corps” and the pre-school program. He appreciates donors’ support, asked that it continues and sends holiday greetings.
“Sincerely,
[signed] Burton Rogers”

Above Fold
A row of sketches accompany each of the descriptions of PMSS’s services: CITIZENSHIP (boy in uniform using signal flags), RECREATION (girl at table working on a craft), EDUCATION (little boy at table reading a book) and ECONOMIC OPPORTUNITY (bee-keeper tending a hive). 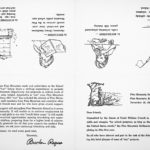 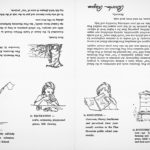 Page 1 of 2
[Sketch: Two small children walking hand-in-hand across a footbridge, following a road toward a distant mountain range.]

Rebecca Caudill Ayars, a well-known author from Illinois, and her husband spent 10 days at PMSS. She lists the many memories of Pine Mountain experiences she now has: fall colors, car and jeep trips up the creeks, kinfolks, talks with the staff and a “haunting memory of the children.” She was please to learn that her great uncle Adrian Metcalf built and lived in Old Log, the original campus building.

She describes the children in detail and how they are both like and unlike other children. “Most of them are on a dead end street. Their mountains are impoverished. Farming, except for subsistence farming…is gone. Sheep raising is gone. Most of the coal mining is gone. The big trees have all been lumbered. The creeks are many, but industry has found no way to harness them productively. A few roads are being built, but roads cannot solve the problem of a people without the means of livelihood.”

Ayars mentions the cooperation of Pine Mountain Corporation with Harlan County to serve all the area children. With the help of contributions of money, PMSS has “an able, dedicated director, a faculty recruited by the director and his staff and in love with teaching the Pine Mountain children; the finest library in the area, voluntarily staffed by Mrs. [Mary] Rogers and assistants …” and enough room to play and learn.

Page 2 of 2
[Sketch: Faces of five small children looking to the right.]

Ayars tells of her and her husband’s worries for the children’s futures. Although many persons and agencies are working on their problem, the children need help to “get the sort of education that only Pine Mountain Settlement School offers. Perhaps because they are in a peculiar sense my own people, I feel especially anxious about them.” … [But] they belong to all people everywhere who love children…” and she ends by asking the readers to send checks to help them get a good education and the good life PMSS “strives so hard to give them.”
“Sincerely yours,
[signed] Rebecca Caudill Ayars” 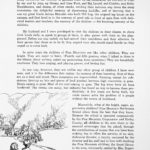 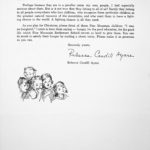