In Mary Sue Baker’s 1941 application to become a student at Pine Mountain Settlement School, she gave these directions to her home: “Go to the Harlan County line where the gravel ends, then it is about 3 miles down Line Fork to the Cabin.” The Cabin, a log house located in a clearing and “surrounded by mountain timber,” was the main structure at Line Fork Settlement and the home of the Baker family from 1937 until 1941.

Mary Sue’s application indicated a bright, sensible and forward-looking young lady who lived in a home that cultivated an interest in intellectual development. This was evidenced by the approximately 500 to 600 books in the home and subscriptions to children’s magazines and periodicals such as Time, Fortune, and Atlantic.

Music was also part of Mary Sue’s education. Her mother, Lutrella, was a music teacher and the home contained a Victrola, piano and organ. Mary Sue wrote that she liked to “read, write, study different subjects, play games, play the piano.” Her favorite kinds of reading were “fiction,… biographies, old books and book[s] about animals. I also like to read encyclopedias and the World Book.”

At the end of each semester, PMSS students were required to write a letter to their parents evaluating their accomplishments, the areas needing improvement and their goals. Much insight can be drawn about Mary Sue as a student by reading her clearly written “semester letters” to her parents. The PMSS Archives hold two of her letters, dated June 1942 and December 1942, in which she, in her tidy cursive handwriting, expresses her thoughts about each of the subjects she had been studying.

As did all the Pine Mountain students, Mary Sue kept busy with studying and fulfilling campus working assignments. Mary Sue wrote positively about her classes – English, Biology, Home Economics, Civics Science, Music or Bible – in which she enjoyed class discussions, kept daily notebooks, read relevant books, and participated in various projects and field trips. As she stated in her application, Mary Sue was particularly fond of writing and reading and these activities were featured in all her classes.

Outside of her classes and work duties, Mary Sue found enjoyment in Girl Scouts, practicing her piano lessons and participating in recitals and evening Vesper programs in the Chapel, dancing parties and various sports. She wrote a poem for the May 1945 Conifer titled “This Spring,” and, as reported in the February 1943 Pine Cone, was among students who won prizes for best costumes representing characters in books.

Mary Sue’s parents wisely left the selection of her future career up to their daughter, although all three agreed that she would attend college as did both her parents. As she developed her Vocation Book, part of the requirements of her PMSS Civics class, she realized a possible future for herself: “I didn’t have much of an idea what I wanted to be until I decided I would write my [vocation] book about a librarian. Now I am really interested in this vocation.”

Accompanying Mary Sue’s 1942 semester letters to her parents was a letter from the Acting Director (likely Arthur W. Dodd), which stated,

“I am pleased to add to Mary Sue’s letter that she has done outstanding work both in her studies and in her Industrial work. … Her teachers feel that she shows very definite qualities of leadership… In the house her conduct was ideal and she has contributed in many ways to the life of our school community.”

At the time of Mary Sue’s application to Pine Mountain, her father was a Protestant clergyman in a Presbyterian church and her mother was engaged in social work. They had been living in the Gilley, Kentucky, community for about seven or eight years.

Mary Sue kept in touch with Pine Mountain Settlement School throughout her later life. She was mentioned in the 1981 and 1983 PMSS Alumni Association’s newsletters as among those who could not attend homecoming but sent greetings. At that time her name was listed as Mary Sue Baker Hamilton.

As one of two satellite programs associated with Pine Mountain Settlement School, the Line Fork Settlement was a small cluster of buildings and a program limited to medical and industrial training and other community social services. The programming was similar to Big Laurel Medical Settlement, the second community service center that was approximately two miles west of the central PMSS campus.

Mary Sue’s mother, Lutrella Baker, assisted with the education and industrial training programs at Line Fork, while her father, The Reverend Richard Baker, was charged with programming and general site administration. They worked at Line Fork Settlement until its services were ended in 1941.

Line Fork, located six miles to the east of the School, was also located in an adjoining county, Letcher, and presented several obstacles in both travel and communication with the managing center at Pine Mountain. Yet, its remote location helped to build its close community. Mary Sue, her parents and her younger brother benefited from this tightly woven community and the many lives that were interwoven around the activities at the Line Fork center as seen in the following Gallery of photographs selected from the Lutrella Baker Album. 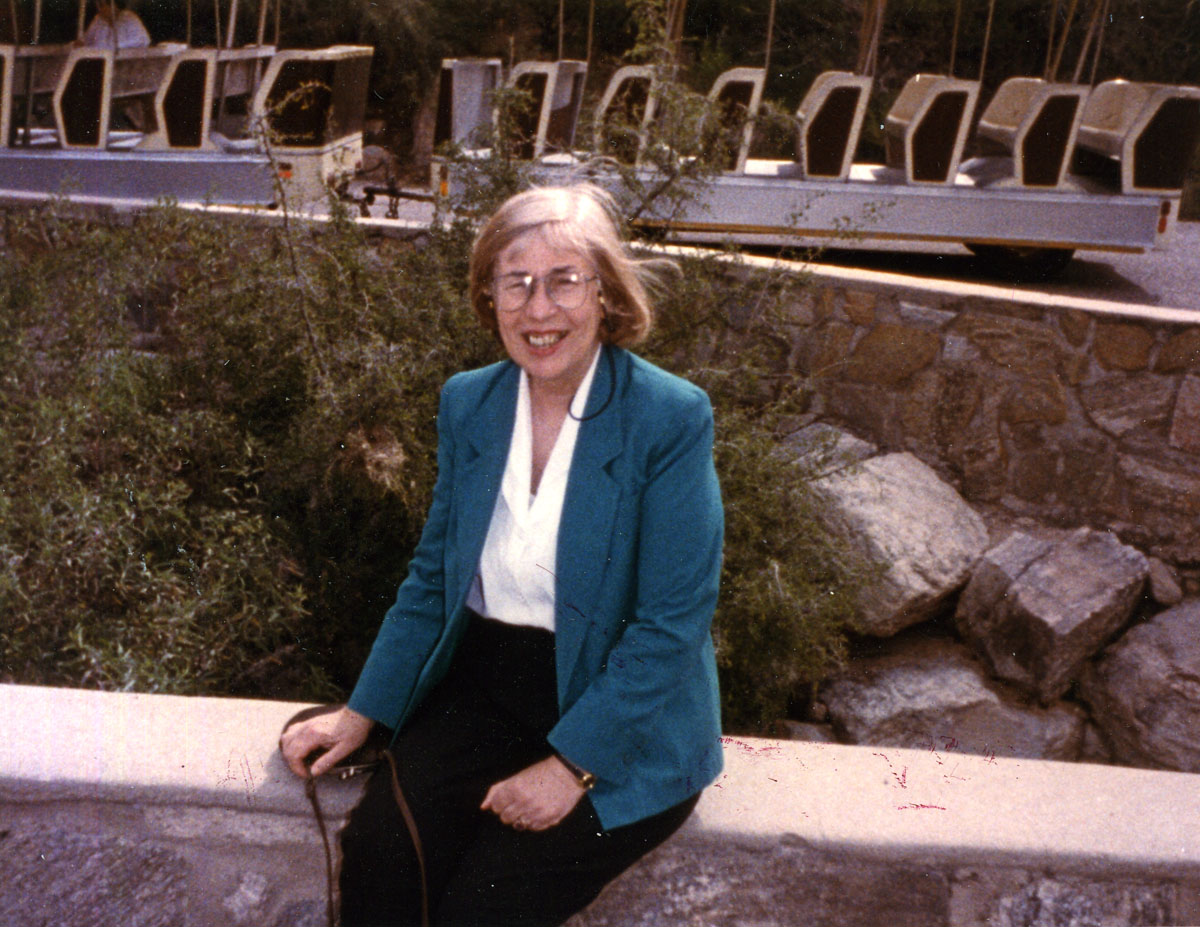 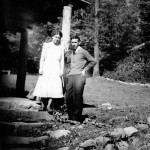 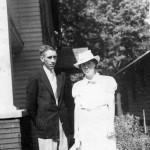 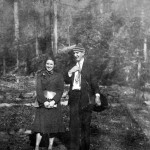 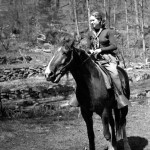 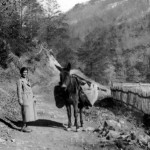 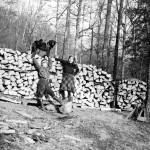 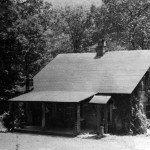 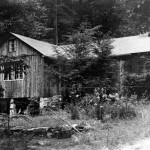 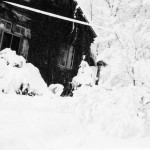 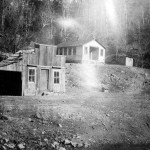 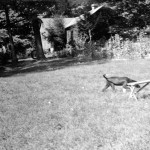 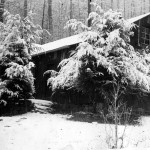 Lutrella Baker Album. The new Cabin at Line Fork in the snow. [line_fork_004b.jpg] 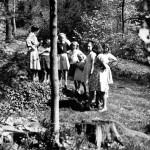 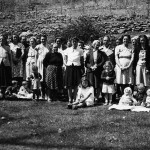 Lutrella Baker Album. Line Fork Settlement, 1937-41. Group portrait of adults and some small children on lawn in front of terracing at Cabin. [line_fork_012a.jpg] 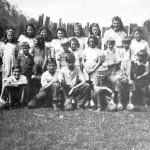 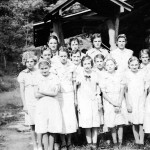 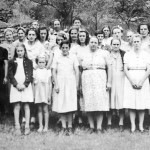 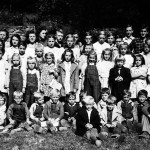 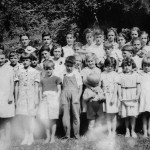 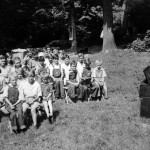 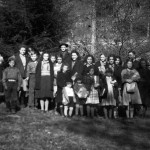 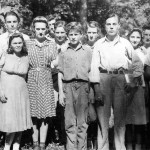 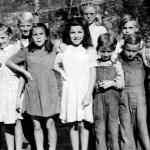 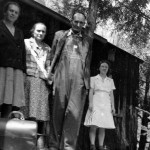 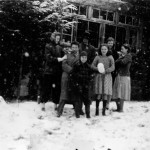 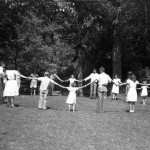 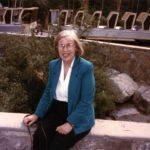