Trustees affirmed the action of the Executive Committee in appointing Paul Hayes as Director of PMSS, and commended Paul for major accomplishment in a short time.

Trustees created 2 temporary committees to consider status and policies and (1.) work extensively on aims, purposes and program plans for PMSS for next 25 years, and (2.) consider Board structure, By-laws, and relationship with Berea College. There was a public meeting at PMSS 12-28-86 to formulate aims and goals for the future of the School.

The Harlan Co. Board of Education assigned some students working in (and paid by) the JTPA program to work under the supervision of PMSS staff during the summer.

500 raspberry and 200 thornless blackberry plants were set out.

Re-wiring of West Wind & installation of smoke detectors in all rooms was completed.

Consideration was given to the need for a community day care center and community activity building.

The Board received the report from “Committee A” with recommendations for the future of PMSS.

The Trustees invited Paul and Ellen Hayes to continue the leadership of PMSS, with special commendation for their hard work and achievements in a difficult situation.

The Trustees voted to grant the Peco Oil Co. the right to drill for gas and oil on PMSS property, except for the immediate campus area. 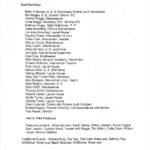 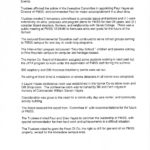