(Correspondence not in the Kendall Bassett donation)

[Note: Letters from PMSS staff in the PMSS Collections are carbon copies, typewritten, unsigned, and meant for the Office files. The original signed letters were sent to the correspondents. The initials at the bottom left of most PMSS letters indicate the writer (along with initials of the secretary). For example, “dL” are the initials for Ethel de Long (Zande). Letters to PMSS staff are typewritten originals unless stated otherwise. The following list of contents is in chronological order and not necessarily in the order of the image numbers.]

001-002 N.D. [Unsigned carbon copy of two typewritten pages, possibly written by Ethel de Long Zande]. [001] “The road at last is thrilling!….This is grandiloquent, but it has to be, to give you my impression of the road since Mr. Fox (engineer) took Uncle John Shell and me over the route yesterday…. I know that everyone who has raised money for this road will feel big, too, for the rest of their lives.” The narrator then describes the eight-hour trip over the route, encountering enough vines and fallen tree-tops “to tear anybody’s riding skirt and boots to pieces.” She describes the cliffs, ridges, ravines of laurel and rhododendron, and Hammer Branch. She quotes Uncle John, who tells a story of Tible Elevins, a confederate soldier, [002] who successfully escaped Union soldiers by jumping from a cliff (Rebel’s Rock?) into a tree. She describes going through a narrow gap in a huge boulder and down to the “new station, which is going to be a Chad Lewis’ store and is already staked out.” Mr. Fox tells her that the Road will leave untouched a pile of rocks on top of a nearby mountain, which may have been the site of a smelting furnace used by Indians, inspiring tales of lead, silver and gold in the mountain. She concludes: “You couldn’t ask for a lovelier approach to our School!”

003 October 17, 1916. To Mrs. John Berwind, Bridgehampton, RI, from dL (de Long), who learned about Berwind’s interest in PMSS from Evelyn K. Wells. Miss de Long agrees to give a speech next January when she is in New York. “…[M]y object is to give people an impression of the hills, and the opportunities they hold…. I do not ‘beg’ for money in my talks, trusting to the spontaneous interest of people as soon as they know of the mountains, to help with the real need.” She encloses PMSS literature and gives an update about the Callahan family who was featured in a fundraising letter.

023-023a November 17, 1916. Two-page letter to Mr. (Darwin D.?) Martin from (unsigned, likely de Long), [023] with a summary of the proposition for the Road that she will present to the Fiscal Court of Harlan County early December. She explains the financial arrangement with Harlan County and the State Aid Fund. “The road is going to be expensive, but it has to be, and we are willing to work for it, not only for the aid it will give our school but for the enlightenment it will give this whole community.” She mentions Miss Celia Cathcart’s “raising of $25,000 as the school’s donation….” Miss de Long asks if he recalls writing to her that he would help secure the other $25,000 loan. [023a] She explains the problems with issuing bonds and asks his advice for a better way to secure the loan.

004 January 15, 1917. Two-page letter to Mr. C. Bascom Slemp, House of Representatives, Washington, DC, from (unsigned, likely de Long). [004] She describes the financial arrangements with the County for the Road across Pine Mountain from the L. & N. Railroad. She is responsible for raising $25,000 along with a PMSS teacher, who is raising $25,000 in the Middle West. She explains how a road would benefit PMSS. She offers to travel to  Washington to meet with him. [004a] She asks for his thoughts on the matter.

011-011a January 29, (no year). Two-page handwritten letter to Miss de Long from Helen B. Merriman, who regrets missing de Long’s talks. She wishes to send “a little money for your work” and asks where to send it.

009 February 6, 1917. To Miss Mary G. Caldwell, Dana Hall, Wellesley, MA. from dL (de Long), expressing appreciation for her gift of $100 and also for her plan to help with fundraising. Miss de Long writes that she enjoyed her visit to Dana Hall and will return to Wellesley again in April.

010 March 12, 1917. To Stuart M. Buck (address truncated) from (unsigned, likely de Long). She has sent him a circular about the need for $25,000 for the Road. Knowing his interest in PMSS, de Long asks for suggestions of possible donors of $500, $100, or others who would help raise these sums. She will be on a six-week campaign in the East and hopes to be able to tell of money already raised.

012-012a March 12, 1917. Two-page letter to Miss Merriman, Boston, MA, from dL (de Long), [012] who describes the need of the School and the community for a road over Pine Mountain. She relates her fundraising plan for the Road [012a] and the financial arrangement with the State Aid plan. She urges Merriman to direct her gift to the Road Fund.

013 March 12, 1917. To Miss Marjorie T. Gregg, Boston, MA, from dL (de Long), asking how to get in touch with Mr. Plant. She would like “to know just how matters now stand, for although I have four thousand dollars towards the twenty-five, I am very anxious to be able to start out on my trip (to Boston) with ten thousand of it already raised.”

007-007a March 13, 1917. Two-page letter to Theodore Ahrene from dL (de Long), [007] thanking him for his continued interest in PMSS. She reminds him that a $100 subscription was made in August 1916. This year, she asks if he would support the Road Fund and explains the benefit of a road to PMSS. She is sending literature that will explain the financing through the State Aid plan. She explains her road fundraising plan. [007a] She describes springtime at PMSS and mentions the new dining room.

008-008a March 21, 1917. Two-page handwritten letter to Miss de Long from Mary Grace Caldwell, Wellesley, MA, who has passed de Long’s letter to Miss Brown, “the one who made the suggestion about raising money for the road-making.”

014 July 21, 1917. To Miss de Long from Miss A.L. Pratt, Secretary to C.B. Slemp, Virginia representative in Washington, D.C., sending a list of names of possible donors to the Road Fund. He encloses a subscription card.

016 July 3, 1917. To R.D. Baker, Winchester, KY, from (unsigned), appreciating his interest in the Road and plans to “present the matter of the Road to Mr. Kemmerer” via Miss Melville. She asks Baker for “a line of introduction.”

018 August 28, 1917. To Editor of the Harlan Enterprise from (unsigned, likely de Long), who tells of the positive reception she experienced in soliciting donations from the “Citizens of Harlan Town and County” for the Pine Mountain Road. She encloses a list of pledges that she asks the editor to publish with a thanks for their promised help.
019-019a N.D. Two-page “List of Contributors to the Harlan Quarter-Mile of the Pine Mountain Road.”

020 September 12, 1917. To Mr. E.S. Baker, Bramwell, WVA, from (unsigned, likely de Long), who missed seeing him at the bank while in Bramwell to get his suggestions about fundraising for the last half mile of the Road. She asked him to send them in writing. She expresses appreciation for “the efforts you did on behalf of Pine Mountain….”

021 September 12, 1917. To Colonel W.H. Thomas, Bramwell, WVA, from (unsigned, likely de Long),, recalling her visit in Bramwell, mentioning Mr. Baker, Mrs. Buck, Mrs. and Miss Thomas. She is anxious to know “how many feet of that road of ours you will build” before October 1.

022 September 12, 1917. To Mr. C. Bascom Slemp, House Office Building, Washington, DC, from (unsigned). “Miss de Long was much interested in (our) meeting and of the suggestions you had for the future.” PMSS still needs $2,000 for the Road Fund. Mentions a meeting that Miss de Long may have with Mr. Dudley, Mr. Davis, and Mr. Bullock. 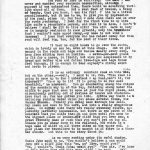 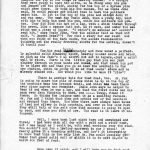 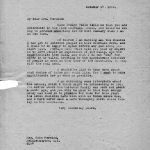 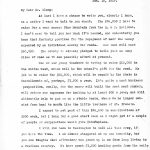 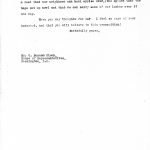 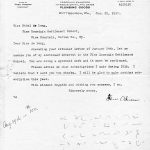 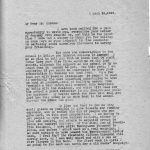 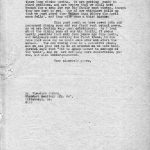 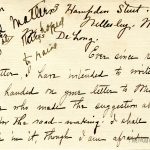 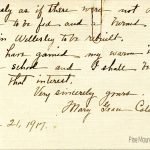 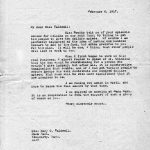 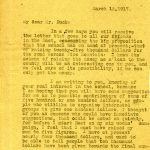 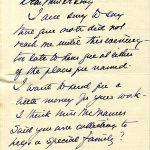 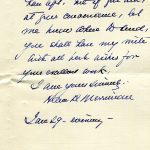 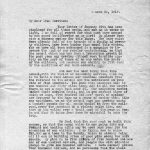 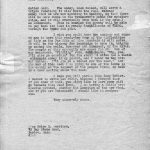 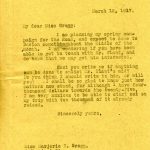 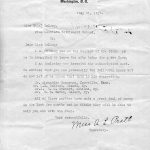 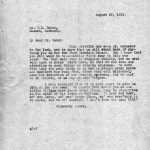 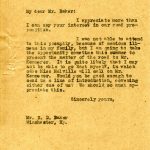 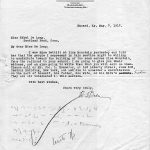 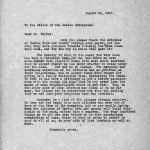 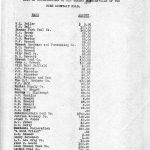 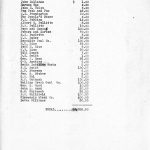 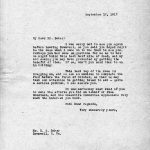 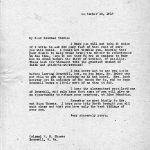 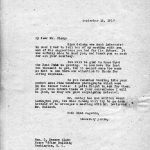 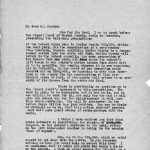 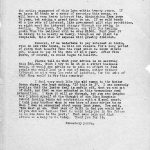