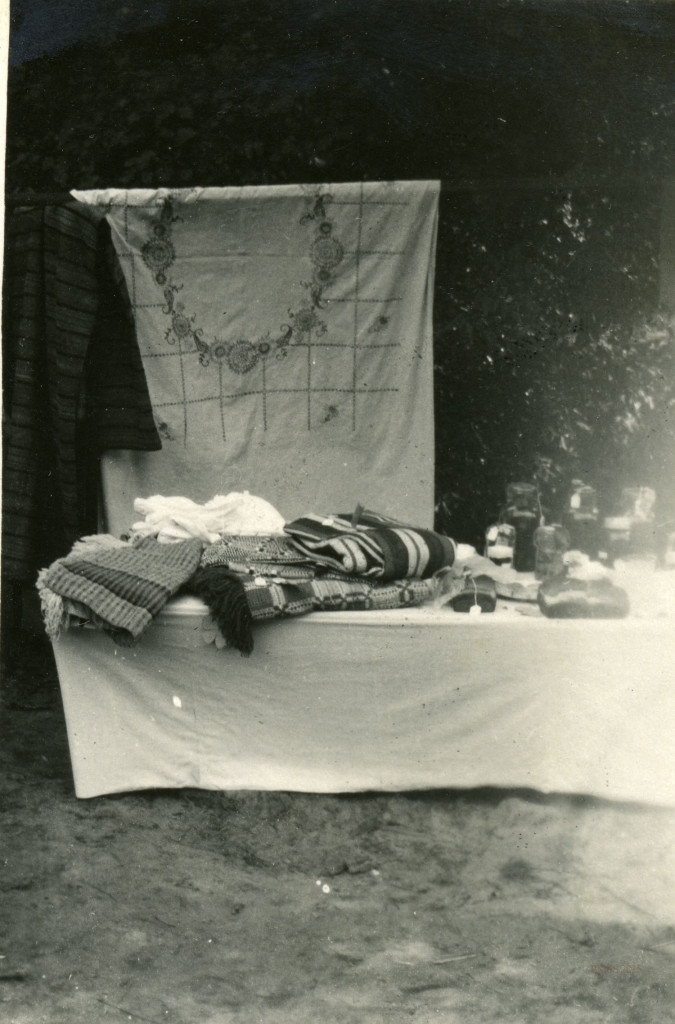 One of the best personal accounts of a Fair Day can be found in Alice Cobb’s family letter which contains an account of the 1935 Fair Day at Pine Mountain Settlement School. In a lighthearted style, typical of Alice Cobb, she describes the people, the exhibits, the fashions, conversations, and gives the occasion an intimate and youthful exuberance.

Saturday was Fair Day — and what a day. It was beautiful — blazing sunshine from early morning till suppertime, and you can imagine how picturesque the playground looked with all the gay quilts and coverlets spread out, and the rows of canned fruit and vegetables and all, and the most gorgeous dahlias, zinnias, marigolds. My room is a bower of them tonight — one blue-ribbon dahlia “flower-pot.” (I believe from Arwilly Lewis.) Jess Cornett, the nightwatchman gave me a can of huckleberries and one of blackberries that he put up himself. 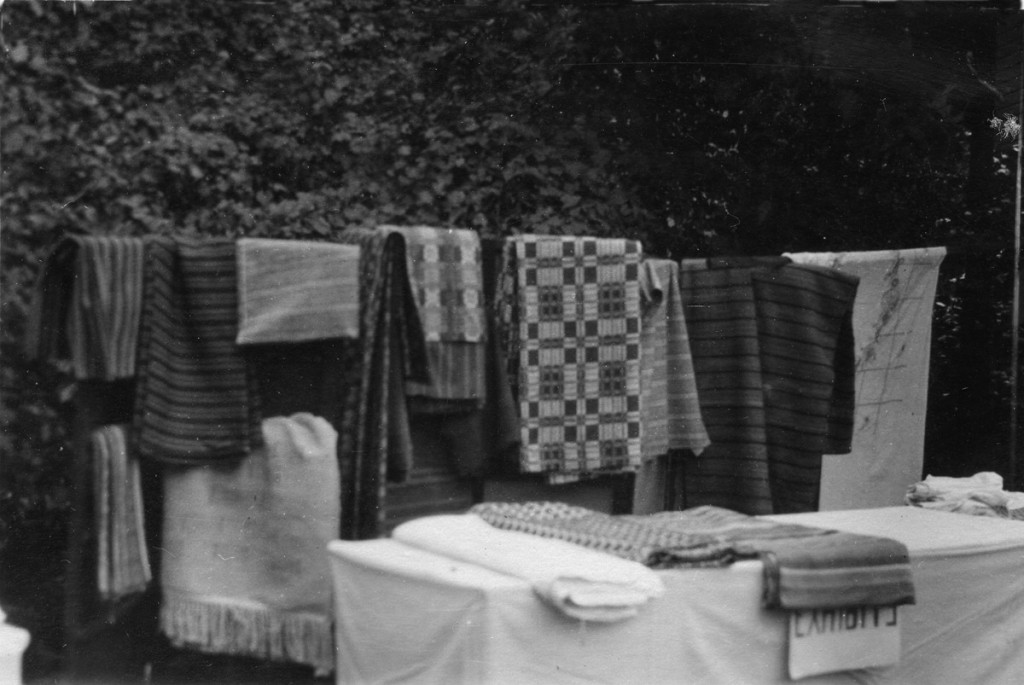 Mr. Stapleton [Robert Stapleton] was master of ceremonies and called the events. Everett Wilson and I judged the ballad singing. Uncle Singing Willy Nolan came all the way from London, Kentucky, to sing, and he was just great. My friend Abner Boggs didn’t show up though. And he promised so faithfully to be right on hand with all his brood — eight of the singinest younguns anybody ever did see, he always says. After the ballad singing came the hog and chicken calling contests. I wish I could describe the different kinds of calls.

Then came the dinner hour and there was real ice cream and also there were ham sandwiches brought over the mountain in the school truck. I had a grand time circulating around the crowd. It was like a family reunion. Bert Smith was there; in a bright orange dress that she made for the occasion. She is from Line Fork. Nancy Lewis also from Line Fork (Nancy’s Isabel won a prize for sewing for which we were all very proud, and Nancy said she wouldn’t for a sight try to make a patch agin’ Isabel’s because she couldn’t sew half so good.) And Bennet Hall came with brooms and trenchers he carved, and Betz Lewis, bursting with all the Big Laurel talk — she is the official newspaper — and Haywood Harris. I always make a point to ask Haywood where Cory is and why he didn’t pack the baby and bring her along. He leaves her at home — won’t let her out of the yard — but he never misses a party himself. And he’s always wanting to have his “pitcher took.” Delia Creech‘s beets won a prize, which was good, and T.Y. Creech ambled over from Putney way to work Uncle William‘s famous nine-ring puzzle, and Kerm [Kermit] Creech came from Cumberland with soap to exhibit that he biled hisself, and so on.

I had charge of the antique booth, which was in the hottest sunshine, so the day finished with a near sunstroke. There was a set-running contest, won by the Big Laurel people — Cindy Ellen and Ray, Sillus [Silas] and Mattie, Big Alice Boggs and George, Homer and Arthy and all the others.

There were also horseshoe pitching contests, swimming, and baseball game and then at the end Mr. Stapleton roared out the prizes. He’s much concerned about my posture and we have a password which is “ramrod.” Right in the middle of the hurly-burly, when I was rushing across the grounds with both arms full of antique dolls I heard this great big bellow, “R-R-R-ram rod!” I stiffened up to attention, and there he was standing on a table clear across the baseball diamond.

One of the dolls is quite an elaborately dressed lady. She has even a laced corset, not to mention stockings and shoes, pantalettes, petticoat, etc. We found her in the attic at the Medical Settlement, and the Big Laurel folks call her ‘Miss Cobbs’ because she’s supposed to look like me. I must say she’s not very beautiful, but they all admire her very much, so I take it as a compliment.

My Sunday School starts a week from Sunday. I’ve been waiting to begin in order to feel my way along toward starting one at the Divide School two miles down Incline way, where there are ever so many children — more than in the settlement area. But now I’ve got Cora Scearce Young enlisted (a former Pine Mountain girl who married a boy at Evarts and it was a mistake. I believe he’s in jail now for murder, and so are his father and brother, and he’s left Cora high and dry.) She’s really quite a lovely girl and a school teacher. So we’re going to start ahead with it, and I’m to help her as I can with her 4-H club work, farm work with boys and girls of school are — cooking, sewing, gardening, dairy, and poultry. (Imagine me!)

So all in all it was a splendid Fair — only a few drunks and only one or two arrests, although Clarence Patterson, our Deputy Sheriff, who is as dauntless as one of the policeman’s chorus in Pirates of Penzance was quaking in his top boots all day for fear there would be a disagreement with somebody.

I am almost in the notion of buying a small radio. We don’t get newspapers here except The Sunday Times, and it would be nice to get the news every day. Of course, it would be a luxury, especially when I’d never get to listen to it before nine o’clock at night, and on three nights a week not before eleven.

Must stop and go to teach a class in American literature.