Though the following account, written by Evelyn Wells for the 1926 Pine Mountain Settlement School’s newsletter, Notes, comes nearly ten years after the fact, it captures the amazing skill of “Singing Willie” Nolan and his encounter with one of the most famous of the “Song Catchers,” Englishman, Cecil Sharp. 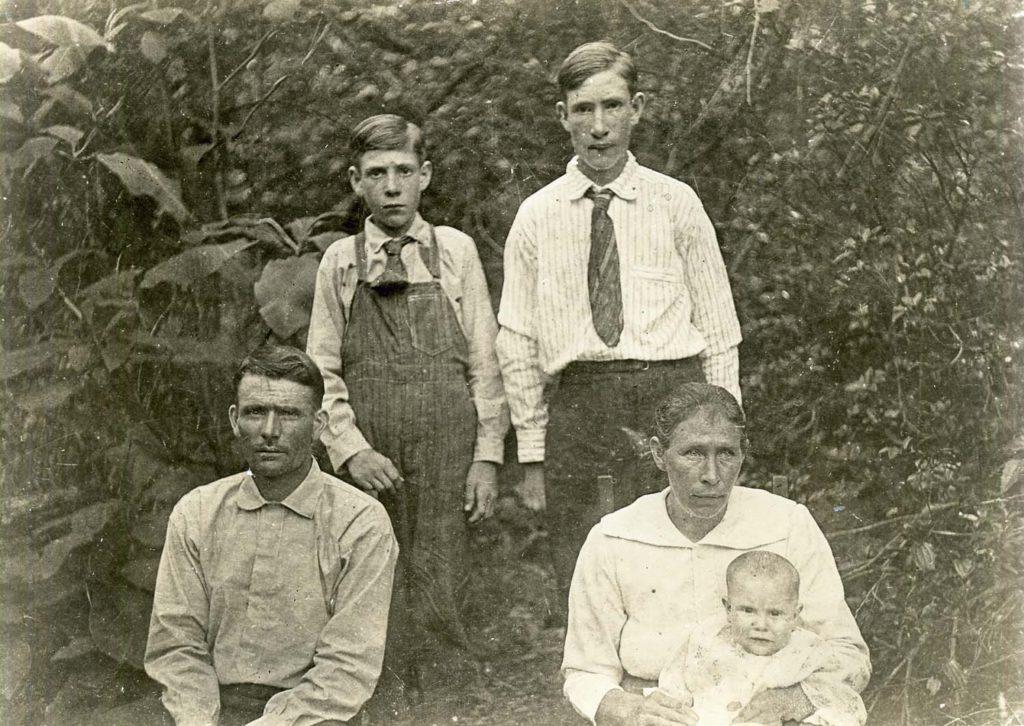 Singing Willie Nolan and his family. The picture belonged to Evelyn Wells and was used to make a cut for her book “The Ballad Tree” Sent to PMSS by her nephew, John R. Wells 12-27-90.

AN EXPERIENCE that comes to us all too rarely these days is a visit with such an old-fashioned ballad singer as “Singing Willie” Nolan, who can “sing you song ballets all night, and never the same one twice.” For some recent visitors from England he produced a ballad from the back of his mind which he had not thought of twenty-five years. “I just ree-collected hit as I was a-comin’ down the branch this morning.” There it was, as unchanged and lovely as it must have been hundreds of years ago, — probably the better for having been forgotten by him for so long. Not a word was missing as he led us through the twenty-three verses of the lamentable story of “Little Mathy Grove” and “Lord Daniel’s Wife.”

We took down the words and the tune, and flew to our English and Appalachian collections. We found that Singing Willie’s version of this famous ballad, once known through the length and breadth of England and Scotland as Little Musgrave and Lady Barnard, was as full as any that could be found, — more complete than any collected in our mountains, that we know of. Our English visitor, himself a collector of note [Cecil Sharp] in his own part of the world, said, “I had only to close my eyes to believe myself back in Somerset, listening to one of our finest traditional singers. He has the same vowel sounds, the same intonation, the same purity of diction.” And to Mr. Nolan he said “I’ve come two thousand miles to hear real singing like yours.”

Evelyn K. Wells, herself a “Song Catcher” writes of “Singing Willie” Nolan in her book, The Ballad Tree (1950), written while she was in residence at Wellesley College where she went to teach after leaving Pine Mountain Settlement School. Her notes tell us of the sources of Nolan’s well of music. [Wells, Evelyn Kendrick (ed.) / The Ballad Tree, (1950), p. 110, 295 [1920] (Little Matty/Massie/Mathy Groves)]

“Singing Willie” Nolan, so called to distinguish him from other Willie Nolans in the neighborhood, came rightly by his sobriquet, having learned his songs from a mother who could sing all night and not repeat herself. Many a fine song, however, has been recovered from smaller repertoires. Aunt Sal [Sally Creech] knew only one, but it is a fine example of mountain humor [Aunt Sal’s Song]. “

Speaking generally, not specifically of”Singing Willie” Nolan, Wells notes that children in the Appalachians grow up with the stirring fiction of ballads:

It was … natural for him to sing, for the lines of the ballads slipped from his tongue like his own spoken language. What is poetry to us was his natural expression, and words which seem to us archaic or illiterate, or poetic, were his daily speech. As his tunes belonged to the usage of a bygone day, rejected by the literate, so did his daily speech. “Those words that are no more in use in town do still continue among the men of the countrie, and are refused of the gentlemen for words corrupt and decayed by antiquitie.” [Castiglione, The Courtier. (Trans. Hoby. New York: Dutton, 1928), p.54.]

Willie Nolan built a legendary following through the years.

In 1947 Evelyn Wells published and article in the Vol. 23, p. 23-  Fall issue of Mountain Life and Work (p. 14-  )  entitled “Ballad Backgrounds in the Appalachians,” in which she discusses Singing Willie Nolan.  It is part of a two part series also found in the Pine Mountain Notes for 1947 .

Singing Willie Nolan was born January 14, 1881, in or near Incline, in Harlan County, Kentucky, and died in Salem in Washington County, Indiana, on December 15, 1970. He is buried in Crown Hill Cemetery in Salem. Of his parents, we know his father was Lewis Farmer Nolan (1856-1933) and his mother was Nancy Ann Bellamy. Lewis Farmer married three times, first to Nancy Ann Bellamy 1876 ; to Clara Vaughn 1901 ; and lastly to Arazala “Zula” Dockery in 1903. The three wives gave Willie fifteen siblings. “Singing Willie” married Flora Elizabeth Nolan (1883 – 1960) and they had eleven children, several of whom died in infancy. The children as listed on the website Find a Grave Memorial were:

Besides his fame as a singer, Willie was also through his life a coal miner, a tobacco farmer and a midwife. I suspect that eleven children born at home would give his last occupation considerable validity. 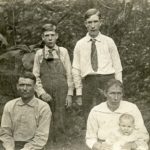 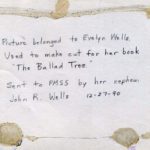 Back of photograph to left.