When Watson “Buster” McIntyre began as a day student at Pine Mountain Settlement School in 1936, he had difficulties dealing with his new surroundings. That he experienced eventual improvement can be attributed to the School’s positive influence but also suggests a young man’s coming of age.

Buster’s sisters, Audrey McIntire and Peggy McIntire, had already been PMSS students since 1933. (The last names of the family members vary in the Creech Family collection of letters, documents, and photographs as “McIntire” or “McIntyre.” Buster appears to have preferred the latter spelling.)

Emily Hill (Creech), Buster’s maternal aunt and a former PMSS worker and student, was the force behind Buster, Audrey, and Peggy’s acceptance by Pine Mountain School. According to letters in Emily’s correspondence file, Emily wrote to then-Director Glyn Morris in November 1932, asking if he would be able to accept her two nieces into the Pine Mountain School. She stated that “I know of no other school that I would rather have them than Pine Mt. Of course, I feel it is the best place in the world and shall always feel so…I would do all I could to pay their way…”

Morris had to decline at the time, as Audrey, 13 years old and Peggy, 12 years old, were too young to qualify. Emily tried again the following spring, explaining that she was taking care of the family. The nieces’ father had been sent to Kentucky State Reformatory in Franklin, KY, for 21 years, leaving three small children with a mother in poor health. Emily wrote, “I have done all I could for them and have kept them together….” Emily then offered to do summer work at the School to pay for the girls’ schooling. This time Emily’s application for her nieces was a success. As of the 1940 U.S. Census, Peggy and Buster McIntyre were living with Emily Hill Creech and her husband, Columbus Creech.

At first, Buster confounded the teachers with his constant disruption of the classroom and his dismissal of any responsibility for his education. At the end of the 1936 school year, Glyn Morris wrote to Buster’s mother that “Buster has ability which he is not using, and we should be gratified if you would speak to him about trying harder for the coming year.”

However, by the end of 1941, Principal Arthur W. Dodd wrote to Mrs. McIntyre that several teachers were reporting improvements. Dodd also felt that Buster “has made more gains this term than at any other period of attendance at Pine Mountain. … He is becoming a man now, as you can see, and we are hoping that he will become a useful one.”

Dodd then described how good students were essential to the country during World War II, writing,

“In this grave period of our national life it is the serious duty of every boy and girl to become better students in order to become better and more useful citizens. In this American ideal we are certain of your continued sympathy and support.”

In Buster’s December 1941 self-appraisal letter to his mother, he wrote, “In the beginning of the fall my attitude was not so good as it should have been, but I think it has improved very much….” He developed an interest in auto mechanics in particular and appreciated the School’s co-operative program. He enjoyed extra-curricular activities as well. He had a role in Thornton Wilder’s Our Town, a play presented by the English class. Also, at the 1940 May Day event, he was among the dancers in Set II of the English Country Dance, “The Maid in the Moon.”

Buster left Pine Mountain Settlement School in November 1942, during his junior year, for service in the United States Navy.

In December 1945, Pine Mountain staff received a letter from the Veterans Education Director at the Veterans Institute. The letter contained a request for a transcript of Buster’s credits, as he was “now enrolled in the Veterans Institute, part of the Public School system of Hillsborough County, Florida.” [ More about Buster McIntyre’s post-PMSS years will be added to this page if further information is found.]

Buster had attended Creech School in Harlan County before coming to PMSS. In his Autobiography, which is a required part of the application to attend PMSS, he described his home life: “We own our home and land. The chief farm crop is corn. We have 1 car, 1 truck, 4 head of stock. Our home is a 7-room painted frame house, heated by fire and lit by lamps. We get water from a well.”

At the time of the 1930 U.S. Census, the parents and their three children, Audrey, age 10, Peggy, 9, and Buster, 5, were living in Franklin, Kentucky. By the 1940 Census, Peggy and Buster were living with Emily and Columbus Creech in Pine Mountain, Kentucky, and Audrey was employed as a domestic worker in a private home in Bronxville, New York.

Buster married Billie Lofley McIntyre in approximately 1945. After 67 years of marriage, Billie died on October 14, 2012, in Florida. They had two children, Linda (Bob) Smith and Gordon (Sylvia) McIntyre and many grandchildren and great-grandchildren. 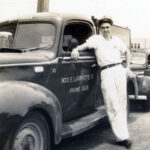 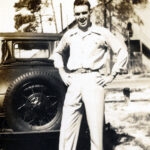 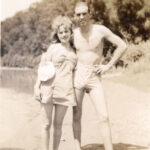 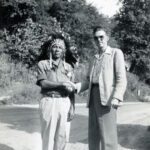 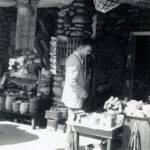 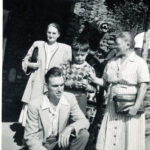 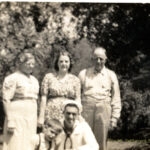 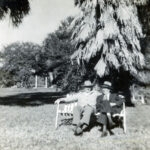 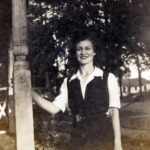 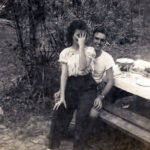 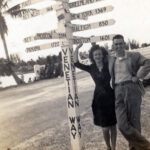 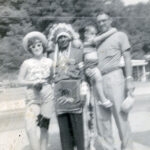