[Note: Letters from PMSS staff in the PMSS Collections are carbon copies, typewritten, unsigned, and meant for the Office files. The original signed copies were sent to the correspondents. Charlsie Vaughn’s handwritten letter and telegram are originals.]

[001] January 30, 1947. To Miss Charlsie Vaughn, Johns Hopkins Hospital, Baltimore, MD, from H.R.S. Benjamin, PMSS Director, who heard from Miss (Grace) Rood that Vaughn was willing to come to PMSS this spring after finishing at Johns Hopkins; Benjamin and Miss Rood look forward to having her at PMSS.

[002] March 11, 1947. To Vaughn at Louisville General Hospital from [unsigned], who was asked by Rood to “make the invitation official” with a list of conditions, including arrival date (before April 1), terms of assisting and relieving Miss Rood, end date (August 1947). In return, the School will furnish maintenance (room and board without cost, limited laundry) at $90 per month. Asks that Vaughn reply to these terms.

[003] March 25, 1947. To Benjamin from Vaughn, accepting the conditions for working at PMSS but cannot arrive before April 11.

[005] March 28, 1947. To Vaughn from Benjamin, asking Vaughn to come to PMSS April 1st, as help is needed to tend to 30 patients with the flu, according to Miss Rood, Dr. (Elizabeth) Henderson and Miss (Minnie) Goodnow, the departing nurse.

[006] March 28, 1947. To Miss Beatrice Lusby, Louisville General Hospital, from H.R.S. Benjamin, asking her to let Vaughn leave for PMSS before the 11th to fill in during the current flu epidemic before Miss Goodnow leaves on the 1st.

[007] June 25, 1947. To PMSS Director (Benjamin) from Regina Driscoll, Associate Director of Nursing, The Institute of Living, Hartford, CT, who received an application from Vaughn and requests “a statement as to (Vaughn’s) professional standing and nursing ability.”

[008] June 30, 1947. To “Sirs” at the Institute of Living, Hartford, CT, from Benjamin, commenting on Charlsie Vaughn: (1) employed at PMSS for 3 months, (2) a PMSS graduate, “serious minded and a good worker,” (3) graduated in spring 1947 from Louisville General Hospital and has passed the State Board examination, (4) had one year’s work at Lincoln Memorial University, Harrogate, TN, and (5) “…a very good nurse. She possesses a pleasing personality, is dependable, and shows a good deal of initiative in her work….We, personally, enjoy her very much.”

[009] August 15, 1947. To Vaughn from Benjamin, expressing “deep appreciation of your service here for nearly six months. It is hard to imagine what we should have done without your competent and cheerful help during this busy time.” Encloses a letter of introduction addressed to his brother, the superintendent of the New Britain Hospital. Sends best wishes for a “happy and stimulating time in your new life and work in Hartford.”

CHARLSIE VAUGHN Student Records – Private
NOTE: Images of the full set of student records are considered private material and are not generally publicly displayed.
Their access may be provided on request, pending approval of Pine Mountain Settlement School and the archivist of the PMSS Collections.
Contact the main PMSS Office for information. 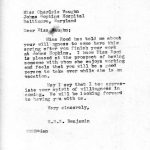 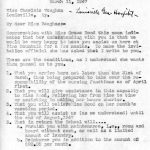 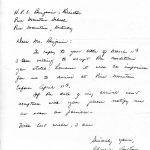 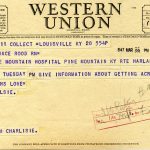 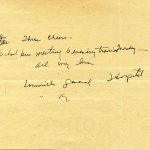 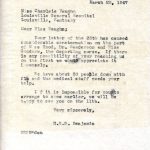 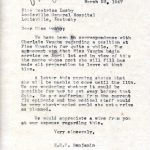 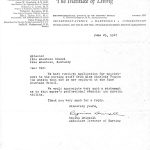 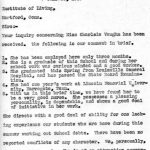 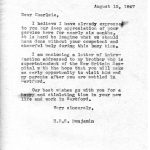