While Ethel de Long was growing up in the northeastern U.S. and attending Smith College in Northampton, Massachusetts, she created a network of contacts that she was to use to great advantage during her years as co-founder of the Pine Mountain Settlement School. One such contact was her friend from Smith College, Margaret McCutcheon.

A December 1914 letter, written by Ethel de Long and archived in the de Long-Zande Papers, states that Miss McCutcheon had recently visited the School, a visit that must have made a lasting positive impression on Miss McCutcheon. Later, she wrote a glowing report of the fledgling school:

…I found many surprises in store for me as I came over Pine Mountain in the glory of the late October sunshine.

My first surprise was the beauty of the place. …the soft green valley, bathed in the haze of Indian Summer, from which a palpable quietude seemed to arise to the russet-shaded slopes of the mountain, cast its spell over my very spirit.

The first intimation I had of the school, was the foot-log over Greasy, carefully flattened on top with well-placed stepping stones. Here I met with my second surprise, that about this school, only an infant in the wilderness, everything was so ship-shape. Good fences, substantial gates, roads, hitching posts, mounting blocks, the straight furrows of ploughed fields and even rows of garden patches, wood-boxes on the porches, coat pegs by the doors, and the picturesque stone tool-house to protect the tools and farm implements — all these spell to me in large letters one of the chief articles in the constitution of the school — order.

For the charm of the school home I was prepared, having visited Miss Pettit and Miss de Long at Hindman [Settlement School], but another great surprise came to me when sitting down to supper in the cozy firelight, I found that the school family filled two round tables and learned that there was another household besides. All-morning school with three teachers and twenty-five pupils was beyond my wildest dreams of what even Miss Pettit and Miss de Long could achieve in a year and a half.

My last, and perhaps deepest impression came more slowly, as each day’s life unrolled itself before me, namely, the distinct place which the school has already made for itself in the life of the neighborhood. I watched men and women ride in to sell vegetables, or boys and girls gather of an evening to ‘run sets’, but the impression was clinched when on election morning I was awakened about 5:45 in the morning by hearing, ‘Miss de Long, we want a place to hold election. We want a nice (which I took to mean sober) election this year’. So they held election at ‘The House in the Woods‘ and it was as ‘nice’ as could be.

GALLERY: “After a Visit” Narrative
[Image of page 2 is missing] 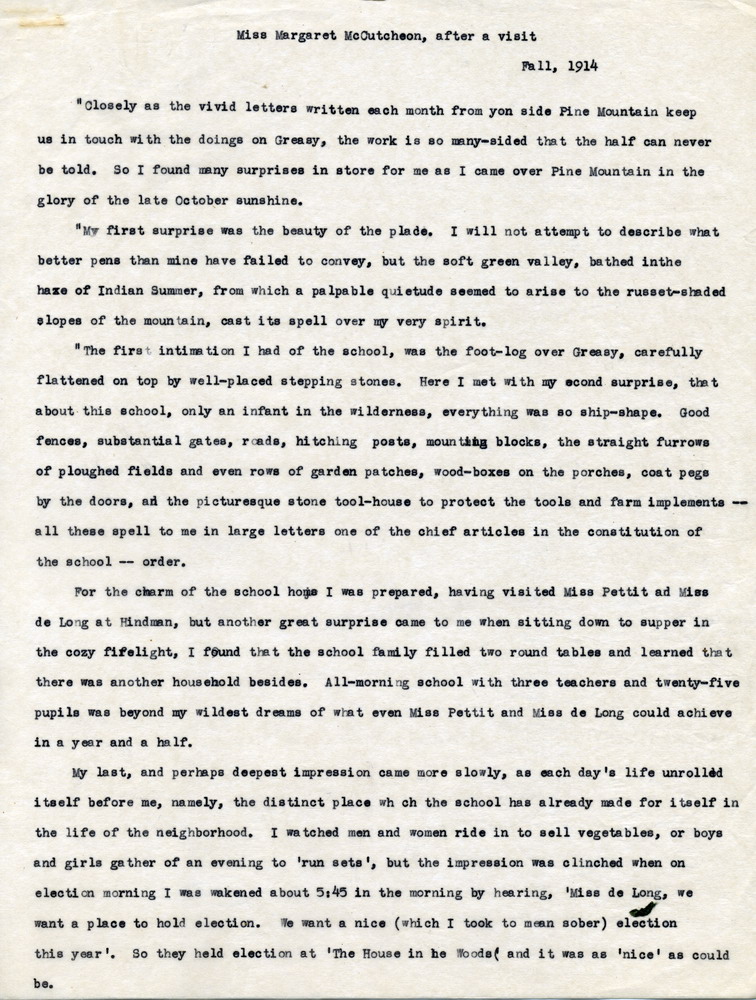 By November 1915 Miss McCutcheon was serving on the School’s General Advisory Board (a precursor to the Board of Trustees). She continued as a member of the Board until 1920, during the earliest years of the School. She was among those who attended the first official meeting of the Board (its fifth meeting) in October 1919, and was re-elected for another year.

Miss McCutcheon maintained an interest in the School into her later years. In the early 1940s Alice Cobb traveled the northeast with a lecture/slide show to raise money for the School. Cobb wrote in her January 1942 travelogue that Miss McCutcheon was among those who attended her presentation at Hartridge School, a private elementary girls’ school in Plainfield, New Jersey.

As of the 1930 U.S. Census, Miss McCutcheon was 48 years old and living with her elderly parents in the family’s Washington Park mansion, “Dalnashea,” on Rockview Avenue, North Plainfield, New Jersey. Ten years later she was living in the same house with her mother, who was by then a widow.

Margaret McCutcheon’s childhood home and one she returned to in later years is today considered an architectural centerpiece of Washington Park in North Plainfield, New Jersey. The park, a National Historical District since 1980, contains “a remarkably well preserved collection of suburban houses representing a wide variety of late Victorian American architecture” including the McCutcheon House. According to an application to the U.S. Department of the Interior’s National Park Service (NPS) to nominate the house for placement on the register of historic places:

…[I]t seems safe to assert that Washington Park, judged by late 20th century standards, was a community of middle-class property owners. Rough correlations can be drawn between the size of houses in neighborhoods within the Park and the status and professions of the occupants. …

The McCutcheon House is described on the nomination form as “mammoth,” comprising 15,000 square feet and sitting on more than two acres of property (according to a history written by Horace R. Stubbs). Miss McCutcheon’s father, Charles W. McCutcheon, was a principal in Holt & Co., New York flour exporters, and an organizer of the Plainfield Community Chest and the Plainfield Trust Company. The family was one of the Park’s largest landowners.

Before the huge mansion was built, the McCutcheon family bought a “Swiss” Shingle style cottage at 21 Rockview Avenue in 1880 and lived there for six years. When they decided to build a new larger house on the same location, the cottage was physically moved to another corner of the same large lot and rented to another party. Sometime between 1894 and 1900 the cottage was moved again, this time to 11 Rockview Avenue where it stands today.

The McCutcheon House, named “Dalnashea,” was constructed c. 1886 and demonstrated the masonry and half-timbered experiments of the English Queen Anne Revival style. An entry in the NPS application describes Dalnashea as follows:

Some of the most outstanding of the [Washington Park houses] were designed by the architect Charles H. Smith…. Smith’s masterpiece in Washington Park is the McCutcheon House…. The largest house on the largest lot in the best part of the Park, it is decidedly English looking, in part due to the use of masonry, and in part due to its many Jacobean details. One of the finest Queen Anne style houses in the state, it is a key building in the Washington Park District both architecturally and physically, for its prominent location in the north central part of the District.

Margaret McCutchen expressed her fondness for her family residence in a poem written 23 years after the McCutcheon House was built:

DALNASHEA — THE HOUSE AND HOW IT GREW
by Margaret W. McCutchen

On the night before Christmas we moved to the House
Although some of the rooms still weren’t fit for a mouse.

In the year eighteen hundred and eighty-six
Yes, we’d been building the house for a twelve month, I guess

The stockings were hung by the chimney with care
After three score and three years, we still hang them there.

The lighting was gas and the cooking was coal,
And our water we pumped from an awful deep hole;

But we did have two bathrooms (undreamed of expense!)
And we had a dumbwaiter (which seemed to make sense).

The house, like myself, was in those days much smaller
And it slowly grew big as I slowly grew taller.

First a library added, a music room later
Rooms atop of the kitchen for a cook and a waiter.

The two primal bathrooms expanded to eight
As the Saturday night tubbing got out of date.

And last came a breakfast room, sunny and bright,
Till the house was too big as the family grew slight.

Yes, such was this house – just the body, the shell;
But what of the Spirit therein that did dwell?

There was poetry, music, good company, laughter,
There was love there and peace from foundation to rafter.

Dalnashea it was called, dale of peace, for our name
Betokens the Gaelic descent whence it came.

So may peace rest upon you in chamber and hall,
From each New Year to Christmas, and GOD BLESS YOU ALL.

When the time came for Margaret and her brother Brunson McCutcheon to give up their beloved home, she wrote this letter in 1950, confirming their decisions for its future:

It has become necessary for me to leave my home at 21 Rockview Avenue. North Plainfield, N.J. and move to smaller quarters. As it has been for over sixty years a home where love and faith and peace have been the ideals, I would like it to serve some helpful purpose. Although not a member of the Society of Friends, I have such admiration for their ideals and much confidence in their administrative ability, that I have offered the property to them as a gift, to be used for such purpose as they may deem best.

This offer was made through Dr. Frank Aydelotte of Princeton by whom, and the Princeton Friends, it was passed on to the Philadelphia Yearly Meeting, confirmed by me in a letter to them of January 16th, 1950.

As, after careful consideration, the Philadelphia Meeting seemed not to be able to use the property, and, as I understand the New York Yearly Meeting is in need of a home for old people in this vicinity, it gives me great pleasure to offer it for this purpose to the New York Yearly Meeting hoping, however, that the Princeton Friends may be included in any further plans. To this offer of my home, my brother, Brunson S. McCutchen of Princeton, N.J., has offered to contribute ten thousand dollars ($10,000.) toward the remodeling of the house.

As to the final disposition of the property, my brother and I do not wish to place any restrictions on the Society of Friends. We would much appreciate, however, that they make an honest effort to operate it for the purpose for which it was given and, if in the end this should seem impracticable, they would consult us (should one or both of us still be living) before coming to a final decision.

Trusting this will meet with the approval of the New York Yearly Meeting of the Society of Friends,

The McCutcheon House was indeed accepted by the New York Yearly Meeting. It became part of a Quaker retirement village as she had hoped and was renamed the McCutcheon Boarding Home and also known as the Yearly Meeting Friends’ Home. Margaret W. McCutchen was appointed an honorary member of the home’s Board of Managers and attended meetings regularly until 1961 when she became too ill to do so.