The Historic Information Resources of Pine Mountain Settlement School: A Report on the Preservation and Access of the PMSS Archive, Special Collection, and Library was prepared by Larry La Follett, Archivist at the Southeast Community College, Harlan County, KY, on November 2, 2002. It is the most comprehensive preservation and access record of the Pine Mountain Settlement School collections as they existed in 2002. There are more recent assessments that contain preservation and access information, but none is more comprehensive than this document which captures the state of the collections at the School, prior to their consolidation in the Boy’s House (Library) archive.

Note: The text of the LaFollette Report, a thirteen-page document, has been annotated in this introduction [see brackets] in an attempt to record some of the critical activity more recently introduced to improve the collection storage since the 2002 report.

LaFollette stated at the time of the document’s preparation that he created the document for the PMSS Board of Trustees in 2002, and it was intended to outline the historical information resources at Pine Mountain and how they might be used to support the School’s mission.

“… with the intent of outlining the historical information resources contained within the School and facilitating a discussion on how those resources may best be utilized in support of the ongoing mission of the PMSS. The basic premise of this report is that utilization of the historical collections of the Pine Mountain Settlement School does not constitute the primary mission of PMSS. Obvious as this statement may seem at the outset, it is predicated upon the basic concept that these materials achieve their importance and value to the School only in so far as they support its ongoing activities and mission.

… In the end, this report is not so much about the present historical collections of the PMSS as it is about their future. As such, it is also a challenge to the Pine Mountain Settlement School Board of Directors to undertake a serious discussion and reach a consensus on the mission, goals, and objectives of the School. In so doing, the role of not just the PMSS historical collections, but all of the School’s information resources will be more fully understood, more capable of being effectively managed, and more able to contribute to the overall programming of the Pine Mountain Settlement School.

The LaFollette Report project was begun in January of 2002 at the request of Nancy Adams, the Director at the time. His first step was to locate and identify materials that would fall within the broad definition of “archival.” At that time he found the following physical collection to be spread throughout the campus. The majority of the holdings were, however, in the basement of West Wind in the “Electrical Room.”

On further inspection the West Wind holdings he determined to be near 90% or greater, so-called “support materials” not created by the School but “about” the School. He then re-defined “archival collections” of Pine Mountain Settlement School as distinct from “special collections”

“… those records (documents, letters, photographs, videos, audio recordings, as well as electronic media) created by PMSS staff or those under contract (formal or informal) to the school documenting the activities of Pine Mountain Settlement School.

LaFollette then proceeded to draw further distinctions between the “archival material” and the “special collections” which he defined as “those items that support the archival materials intellectually, but are generally not unique and are quite often published and available from other sources.” He pointed to the large body of materials by and about Appalachian authors and musicians (largely books and musical scores and song-books).

The materials processed by Berea for the SIA Archive project, LaFollette considered as “Archival collections and he outlines the Berea Series [*Note that 1 cubic foot is essentially one carton]: 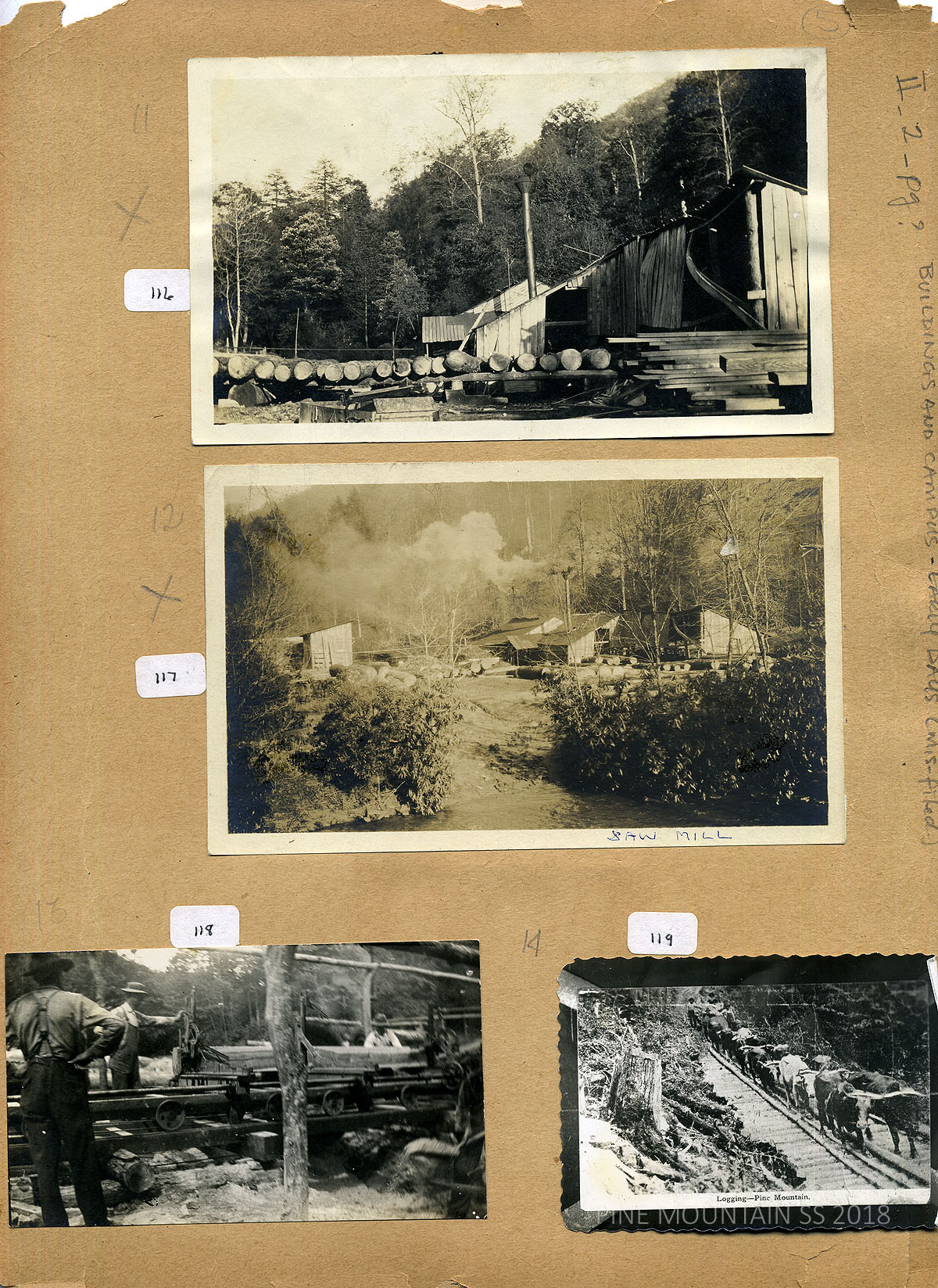 Within the Pine Mountain Room collections, the LaFollette Report advises that the majority of the holdings were photographs broken into 20 separate series and numbering approximately 3,700 individual images [Berea count]. The Series for the Photographs was created by the SIA Project in 1983 and is reflected in the Berea SIA documentation. The original SIA photograph organization of the series is as follows

[The reproduction photos produced by Berea are currently in the PMSS Office in the Director’s office closet.] The boxed photos are 5 x 7 positive images [CONTACT PRINTS] which LaFollette noted were water damaged and contained mold residue. Another 100 lantern slides and 12 cubic feet of school records including correspondence, student records, and nursing records were also located in the Office building. 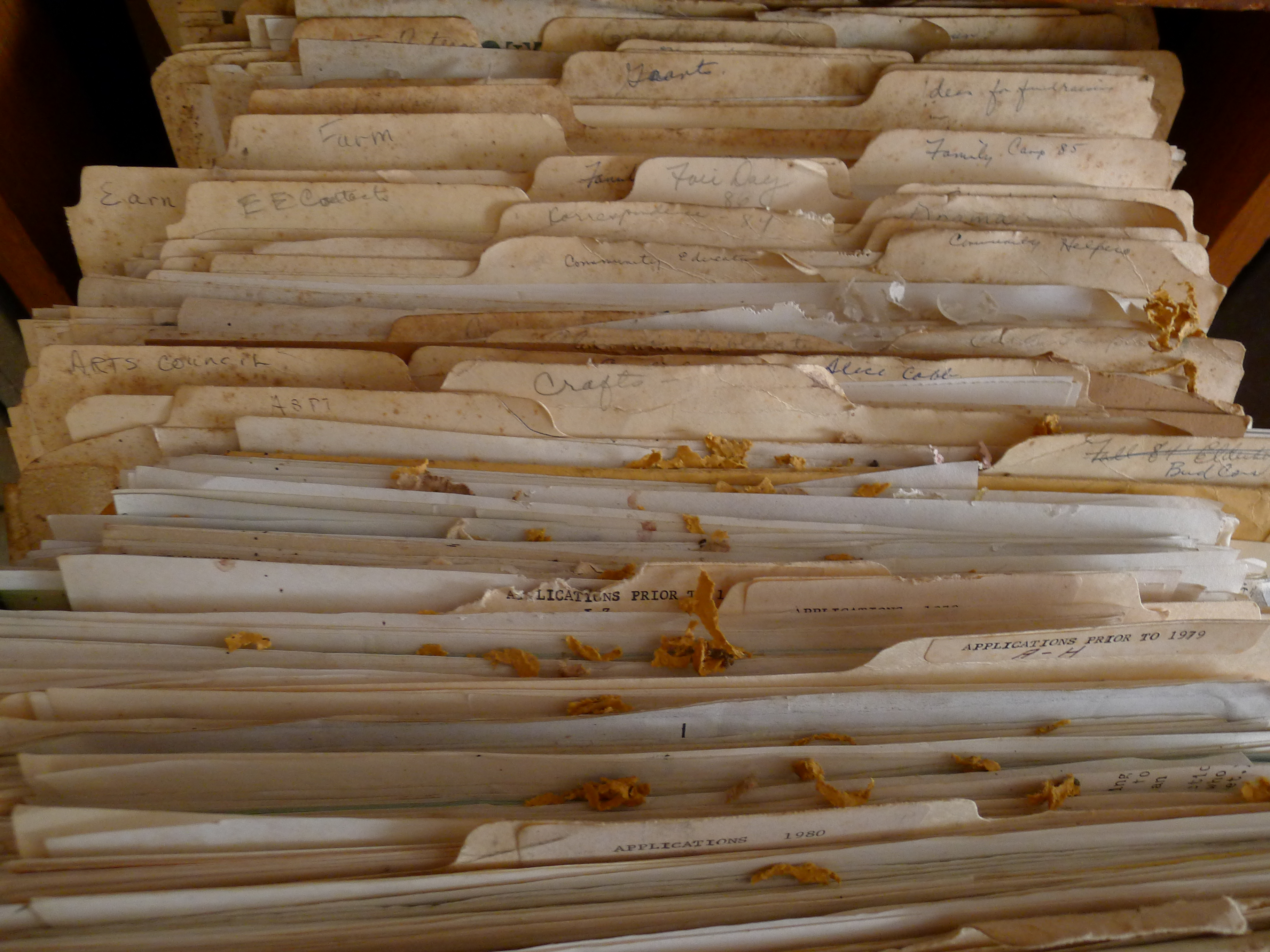 PLANNING FOR THE FUTURE

The LaFollette Report then turns to specific collections of archival and special collections materials and suggests conservation and preservation measures that are urgent and that are recommended. The section PLANNING FOR THE FUTURE will be of interest to those seeking to define retention of collections and use of collections in the future. LaFollette’s report on planning for the future is briefly listed below.