Members of the Coots Family lived in the community of Pine Mountain since very early years. Many were among the student body and workers at Pine Mountain Settlement School.

Other versions of the last name — “Cootes, Coutts, Cotts,” — are documented in the PMSS Collection files. It is not known whether these alternate names represent the Coots Family or are misspellings of “Coots.”

For additional assistance in researching histories of families in Eastern Kentucky see:

COOTS FAMILY HIGHLIGHTS lists Coots Family members whose names have been found in correspondence, biographies, narratives and other historical accounts in the PMSS Collections.

Each highlight includes the title of the source page (in uppercase letters). That page can be accessed by copying and pasting the page title in the SEARCH box on the main page at https://pinemountainsettlement.net.

Bill Coots is mentioned as bringing his guitar to a community gathering at the PMSS Medical Settlement on page 2 (image #002) of ALICE COBB STORIES VISIT TO THE HARMON TURNERS 1934. Bill Coots and his brother Harrison were described as “dressed immaculately,…on their way to do business at Big Laurel.” ALICE COBB STORIES Migration from Hinterlands to Industrial Area, c. 1940.

“Little Bobby Coots” is mentioned as one of the PMSS school children in a Spring 1916 (?) letter (#5, image 027), by Margaret Butler, PMSS teacher and housemother, 1914-1922. MARGARET BUTLER LETTERS 1916. A story about Bobbie Coots’ leaving PMSS to live with his Uncle Carter Coots and Aunt Drusilla is told by EVELYN K. WELLS 1915 Excerpts From Letters Home (image #012). Also, Bobby Coots (or Cootes) is mentioned in a 1942 letter from Celia Holton Cathcart to Alice Cobbs in the PMSS SUBJECT I file titled “Pine Mt. History.”

Carter Coots is mentioned in a “Dear Friends” fundraising letter by co-founders, Pettit and de Long, as working with Solomon Day to clear weeds along the creek banks during the preparation of the grounds for the new settlement school. DEAR FRIEND LETTERS 1913 (image # 001).

Melvin Coots is shown among the seniors in the 1948 GRADUATING CLASS photograph. (See Gallery below.) Melvin Coots’ essay, “The Rattlesnake” was published in PINE CONE 1947, page 07. In 1948, he was working in a lumber yard in London, KY, according to a review of former students in PINE CONE 1948.

Nannie Coots “lives in the little new house with a pailing fence on the way to the Divide. Sister to John Coots.” ALICE COBB STORIES Handing Over Divide Sunday School…June 1937.

PMSS SUBJECT FILE I lists a magazine article that is possibly related to the Coots Family. It is located in the file titled “Magazine & Newspaper” and described as a “statement on the Coutts (Cotts) family’s origins.”

Return To: GUIDE TO FAMILIES IN THE PINE MOUNTAIN VALLEY COMMUNITY 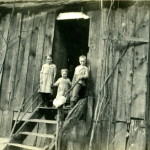 Frances Lavender Album. “This house belongs to Mrs. Jim Coots or Mrs. Maggard. Her daughter, Marthie Spardlin, has a married daughter and these are her kiddies.The 1st-mentioned looks 50 years old.” [lave009.jpg] 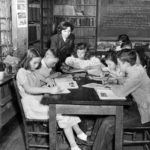