Red Bird Settlement School (Red Bird Mission, Inc.) was established formally in 1921 by Rev. J.J. DeWall, though this article notes it was in operation in 1917, just four years after Pine Mountain Settlement School was founded. Located in Bell County, at the headwaters of the Red Bird river where it intersects Mud Lick creek, the school began much like Pine Mountain with an agricultural emphasis and included a demonstration farm, a dairy and a sorghum mill. .  Founded as a sectarian institution, the school received funding support from the Evangelical United Brethren church before they later consolidated with the Methodist church. It is included in the survey of “Settlement Institutions in Southern Appalachia,” by Loren Kramer one of

The institution is included in the survey of “Settlement Institutions in Southern Appalachia,” by Loren Kramer one of several interns who assembled data on Southern Appalachian Settlement institutions. Working as part of the Resource Development Project of the Southern Regional Education Board in Atlanta, Georgia, which assembled the data on the identified settlement schools of the region, Kramer describes the school as represented in the 1960’s as primarily operating on government funded programs. It’s programs and services included a strong Church and Sunday School program with several outposts. The educational program included a High School of 180 student and 85 Elementary school pupils. Seventy-five of the students were boarding student who participated in a work-study program.

In addition to the educational program, RedBird Mission ran a 22 bed hospital staffed with three doctors and clinic services. The hospital and clinic served some 22,000 – 25,000 patients annually. 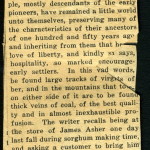 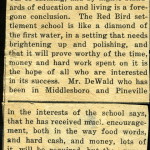 On the Banks of the Red Bird (transcription)

It is vacation time at the Settlement School opened last year at this place, and the teachers and scholars are taking their vacation, but all are looking forward to the re-opening of the school, and proud of the success that has so far marked its progress.  At the county teachers association held in May, a pupil of the Red Bird settlement school, was one of three who received first class certificates, and his average grades were the highest of any of the applicants. The school is proud of Roy Slusher and his standing in the examination proves that good work is being done and that no mistake was made by the founders of the school in the selec­tion of teachers, and in the choice of a superintendent.

Red Bird is ideally fitted as the site for a settlement school.   In the past it has been a little world to it­self; shut off by lack of road from other portions of the country, its people, mostly descendants of the early pioneers, have remained a little world unto themselves, preserving many of the characteristics of their ancestors of one hundred and fifty years ago and inheriting from them that [h…? ] love of liberty, and kindly spirit of hospitality, so marked encourage early settlers.   In this valley is to be found large tracks of virgin timber, and in the mountains that sitt on either side of it are to be found thick veins of coal, of the best quality and in almost inexhaustible pro­fusion.   The writer recalls being at the store of James Asher one day last fall during sorghum making time, and asking a customer to bring him a ton that evening as he was about out.   The man demurred; saying that his team was employed in the cane mill, and he disliked to stop his work, but on Mr. Asher insisting he agreed to bring the coal.   When it was brought and unloaded, he was asked the charges on it and replied, “Well I have been $.50 a ton for my coal when I hauled it, but seein’ that I had to stop my work to get you this, Mr. Asher, I’ll have to charge you more, and think $1.75 about right.”

The first clearing made on this creek made Dill Asher, a noted In­dian fighter, and here he reared a large family, and secured large tracts of lands, which are still in possession of his descendants. The Red Bird portion of Bell county, embracing about one-third of land in the county, and holding within the limits, at least one-half of its wealth, has not received as yet its due share of con­trol in the affairs of the county, and while it feels that it has more com­ing to it than it has received, it real­izes that the lack of roads or other means of communication with the rest of the county is largely responsi­ble for its isolation, and its failure to receive due attention in the matter of improvements, which it is taxed its full share to pay for in other por­tions of the county.

The moonshining industry has gone glimmering, and there is no portion of the country in which a more law-abiding people can be found. The influence of the settlement is far reaching, and its pupils are to be taught how to make the best of life, and that this can be largely done by improvements in the primitive meth­ods of farming, and by higher stand­ards of education and living is a fore­gone conclusion. The Red Bird set­tlement school is like a diamond of the first water, in a setting that needs brightening up and polishing, and that it will prove worthy of the time, money and hard work spent on it is the hope of all who are interested in its success. Mr. DeWald who has been in Middlesboro and Pineville in the interests of the school says, that he has received much encouragement both in the way food works [?], and hard cash, and money, lots of it, will be required, but the purse-strings of the people seem to be un­tied, and they are giving freely and unstintingly to the good cause.

Red Bird invites visitors, although as yet the road is rough and hard to travel, but if one wishes to see and endure for a short time what our ancestors endured uncomplainingly their entire lives, in order to bestow a heritage upon their children, a visit to this place can be recom­mended with the full assurance that [it] will come up to expectations, and surpass them.