“Aunt Phronnie Say by Her Fire Peeling Apples” as told by Florence Reeves is possibly based on Phronie Baker, a well-known community member whose colloquialisms were gathered by many staff members of the settlement school at Pine Mountain in Harlan County, Kentucky. She was also remembering Aunt Sal Creech as she created her story. In a letter to Katherine Pettit, dated June 7, 1934, she wrote:

One day when I was wanting to write I thought: “Why not try to write about the ballads I heard at the school?” So I tried. Then I discovered I wanted a person in the article who could represent the old way of life in the hills. That made me think of Aunt Sal. So, little by little, the article came together….

The names of the locations — Far Hollow and Lone Wolf Branch are not on the map of the region and appear to be constructed for the story.

In this telling, Florence Reeves puts her opinions and memories to work to create a lively telling of life in the Pine Mountain valley and the meeting of Aunt Phronnie with a song catcher. The tale comes to us as more a fiction created by the writer than an account of an actual event, but one that captures much of the nature of the community. Just who the ballad gatherer is, is not spelled out, but Cecil Sharp’s visit to Pine Mountain is suggested.

The reference to William Allingham is curious, as he is a British ballad collector who authored the Ballad Book: A Selection of the Choicest British Ballads which was published in 1872. He never set foot in Eastern Kentucky or America. He did, however, record the British versions of many ballads that found their way into the Kentucky mountains. For example, Lord Thomas and Fair Ellender [Jean Ritchie version], a tragic and violent tale that seems to have been a favorite in Great Britain was also a favorite in the repertoire of many Appalachian ballad singers.

The ballad appears early in the history of the musical form and according to Allingham it was among the so-called black-letter broadsheets in Samuel Pepys’ collection of some 1,800 broadside ballads collected in the 1660s. The Jean Ritchie recording of Lord Thomas and Fair Ellender on YouTube is followed by another popular and long-lived ballad, “Barbara Allen” which has the same mournful fatalism found in the Ellendor (or Ellinor, Ellender) ballad.

This story by Florence Reeves is a strange amalgam that seems to have less to do with describing Aunt Phronnie’s “say” than pulling together notes on a possible home visit with Aunt Phronnie and the author’s interest in tracing Anglo-Saxon cultural roots. The story was sent to Katherine Pettit for comment. It is not known what, if anything, Pettit had to say about Reeves’ literary aspirations.

Reeves was a close friend of Evelyn K. Wells who later gained recognition for her scholarship on balladry and dance of the Appalachians. The Wells book, The Ballad Tree: A Study of British and American Ballads, Their Folklore, Verse, and Music, Together with Sixty Traditional Ballads and Their Tunes. 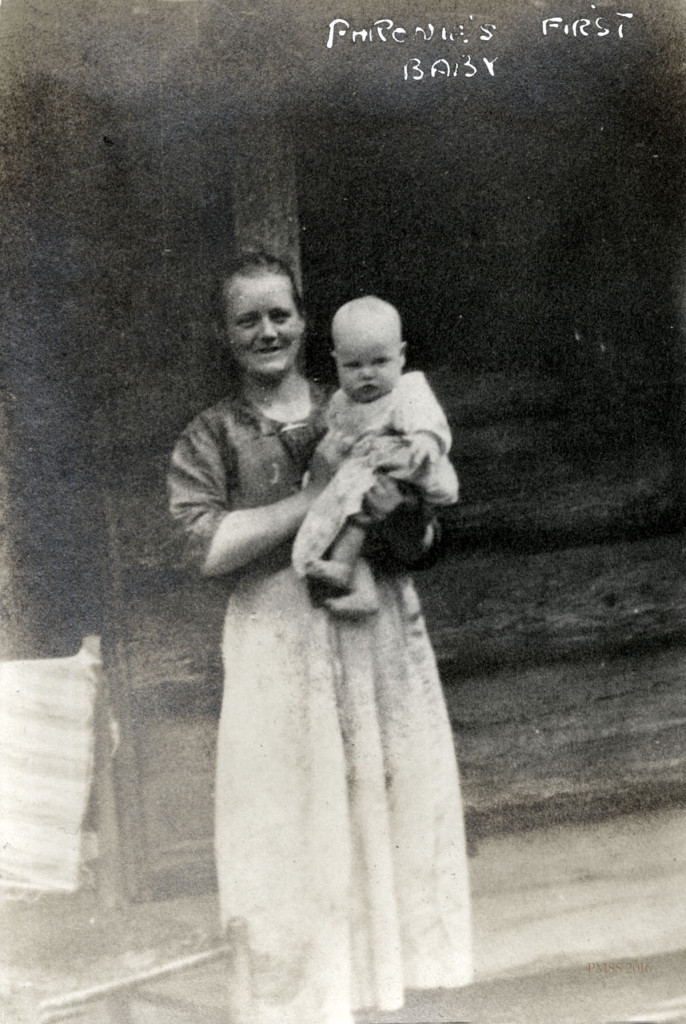 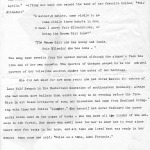 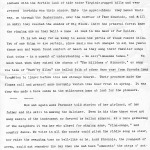 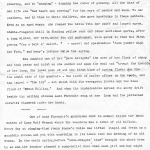 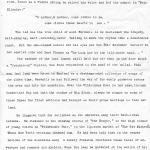 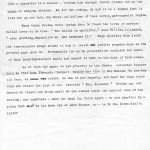 Aunt Phronnie say by her fire peeling a basket of apples. She had always liked these late russets. Today as her knife circled and pared she relished the balmy scene; it made her think of the orchard in “blossomy Aprile [sic].” Lifting her head she raised the tune of her favorite ballad, “Fair Ellendor.”

“The Brown Girl she has money and lands,
Fair Ellendor she has none …”

The song came sweetly from the corded throat although the singer’s face was like one of her own russets. The quavers of the tune seemed to be the natural quavers of her voice; the ancient minors, the notes of her heritage.

She did not know for how many years she had lived beside the waters of the Lone Wolf Branch in the Cumberland Mountains of southeastern Kentucky. Always she had known more ballads than could be sung in an evening before the fire. Rich in all these treasures of song her ancestors had come from Scotland bringing with them but little “plunder.” She herself had never fathomed the queer marks made on the page of books — she who knew all the tracks of the animals in the forest. But there was small need for her to know how to read since there were few books in her home, and all that she loved best was ready in her memory when someone said: “Raise us a tune, Aunt Phronie.”

Knowing her we can believe that her ancestors were “up-headed” and vigorous, an outstanding group even among early settlers. Never could they be content with the fertile land of tidewater Virginia; rugged hills and ever preset hardship was their choice. Into the Appalachians, they hewed their way on through the Cumberlands, over the barrier of Pine Mountain and still n until they reached the shadow of Big Black. There the primeval forest knew the ringing ax as they built a home at last in the head of Far Hollow.

It is not easy for us today to sense the peris of those remote hills. Yet of one thing we are certain since music has not changed in all the years; these men and women found comfort of heart as they sag their familiar songs that today — in a moment of understanding — we call “lonesome tunes.” We know that when they raised the chorus of “The Milldams o’ Binnorie,” or sang the tale of Barb’ry Ellen” the ballad folk of other days came from forest long forgotten to linger before this new strange hearth. Their presence made the flames call and prance! made hardship vanish like hoar frost in spring. It was they who made a bare cabin in the wilderness home at last for the pioneers.

Now and again Aunt Phronnie told stories of her girlhood, of her father and his skill in making the dulcimer. Even in his time there were not many makers of the instrument so favored by balled singers. At a rare gathering of the neighbors, it was her who played for singing game[s], “ring-sangs,” and country dance. No voice in the county could pitch the riddle song as clear, nor raise the swapping tune as bell-like as he [Phronnie’s father]. Aunt Phronnie, the youngest of seven, could not remember the day when she had been “unownin’ the steps o’ set-runnin'” — that oldest of country dances — or unownin’ the swirls and swoops and turns of “Fair Ellendor” and many another song-ballet. [unownin’ = un-owning ?]

p.3
She had married early — “In the rise of her bloom” — and had helped her man make a living by trapping, both in the forest and at the edge of the clearing and by “sanging” — digging the roots of ginseng. All the days of her life she “had heart and craving” for the ways of meadow and wood. To her children, and in time to their children she gave knowledge in these matters. Even as an aged woman she roamed the hills with her staff and looped apron, nimble-fingered still in finding yellow root and other medicinal herbs. After a long winter, her eyes, under the old sunbonnet, were quick to find the first greens “for a bait o’ sallet.” — sorrel and speckledick “down yonder nigh the Fork,” and bear’s lettuce below the spring.

She counted one of her “pure delights” the care of her flock of sheep and took peace and quiet as she carded and spun the wool and “trompt the treadle” of her loom. She loved most of all the first blow of spring flower on the south side of the mountain — tue torch of azalea aflame in the woods, and the laurel —- “the ivy” — set about with its evergreen leaves and the blue flood of “Sweet William.” And when the rhododendron spread its snowy drift beside the calling streams, Aunt Phronnie sang at her loom and the patterned coverlit [sic] flowered under her hands.

One of Aunt Phronnie’s grandsons went to school beyond the headwaters of Lone Wolf Branch where the teacher was a lover of old ballads. Every day at singing-time young Boone’s voice was lifted limpid and fresh as a mountain stream and yet with something in its tones like the keening of an old woman. In the early spring, before “corn-drappin time” brought the short term to an end, the teacher planned a song-ballet hour when each girl and boy might

p. 4
name a favorite ballad and lead the score of children in the tune. When Boone’s turn came he cleared his eyes of his forelock and strode to the front of the room. Tense as a fiddle string he raised his voice and led the school in “Fair Ellendor.”

The lad was the true child of Aunt Phronnie as he declaimed the tragedy, half-singing, half-intoning, never failing to mark the rhythm like a monotonous chant. Not the one-roomed school did his eyes see but Fair Ellendor herself in her scarlet robe and Lord Thomas as “he took her by the lily-white hand …”

The cadence of the last lament still held the air when in the door stood a “fotched-on” visitor, his face respondent to the mood of the ballad. This man had long been known in England as a distinguished collector of songs of the olden time. Recently he had followed the way of the early pioneers across the seas and into the mountains. Over the Wilderness Road he had come, through Cumberland Gap and into the shadow of Big Black. Always he sought an echo of those tunes the first settlers had brought as their prime heritage to this new land.

He lingered that day delighted as the children sang their best-loved ballads. He listened to the chiming chorus of “The Keeper,”(1) [The Keeper] to the high clamor of young voices in “Widdecombe Fair,”(2) to the lib-worn burden of “The Two Sisters“(3). These New World versions charmed him. He had been told that in the remote hollows of the mountains many a lonely fireside cherished these tales of adventure and romance and mystery. None the less he marveled at the wealth of his discoveries. The great ballad lover was never to forget the day Boone showed him the way to Far Hollow and to the warm hearth of Aunt Phronnie, the boy — like a character in a ballad — leading him through forest glades and up the banks of singing streams. As for his coming, by now it is a legend that is told far up and down the forks and hollows of that lovely, unfrequented region.

Many times during those spring days he found the words of another ballad lover to be true. “the ballad is multiform,” said William Allingham, “ever-shifting, vapourlike as one examines it.” High spirited with youth the time-honored songs seemed to him to resist precise manners such as the printed page puts on. Fortunately for us, he persisted; he captured the notes of this inextinguishable music and has set it down in his book of folk-songs.

As we turn the pages we are grateful to the famous collector because here we find Aunt Phronnie herself beside her fire in Far Hollow. We see her old face, as ribbed as one of her russets, and hear her high voice when she raises the tune of her favorite “Fair Ellendor.” Beside our own hearth we linger and dream until we can almost touch the scarlet robe of the heroine, and sometimes — when the backlog falls apart — we are startled by a gleam that must be the keen eye of Lord Thomas, or — is it the Brown Girl’s knife?