The Old Fashioned Dinner 1919, as told by Ethel de Long Zande, is one of the most descriptive accounts of the foodways of the people of the Pine Mountain valley in Harlan County, KY.. 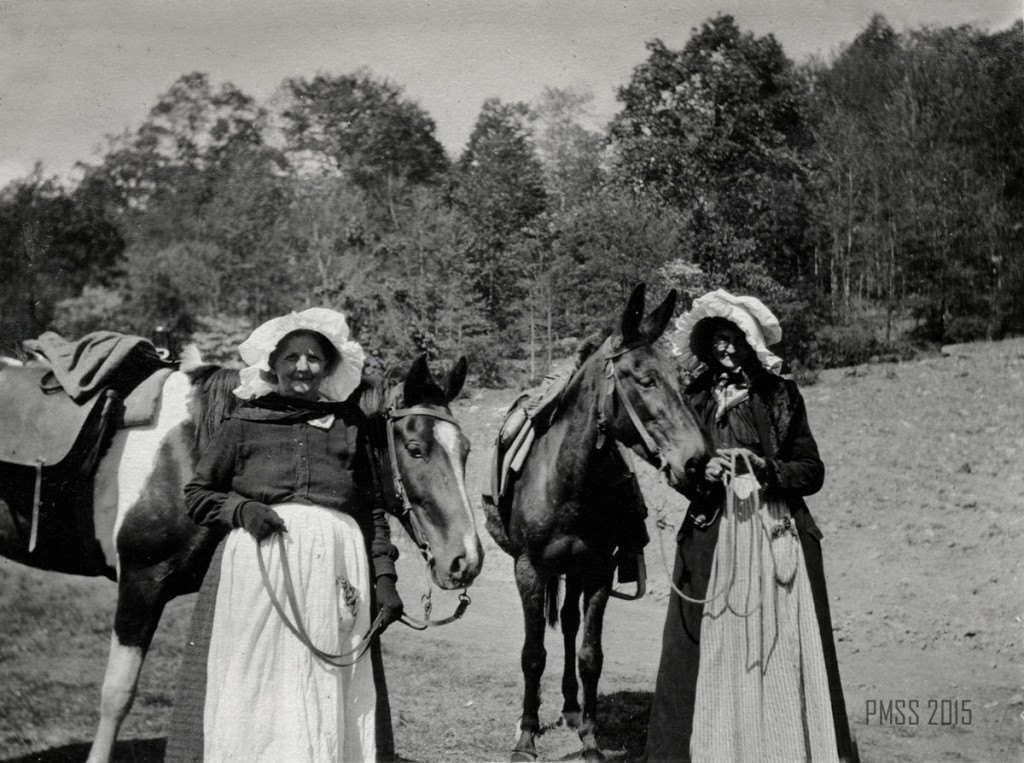 The Old-Fashioned Dinner, March 14, specially for old ladies of the neighborhood who came and “ate dinner” with us at the Old Log House. 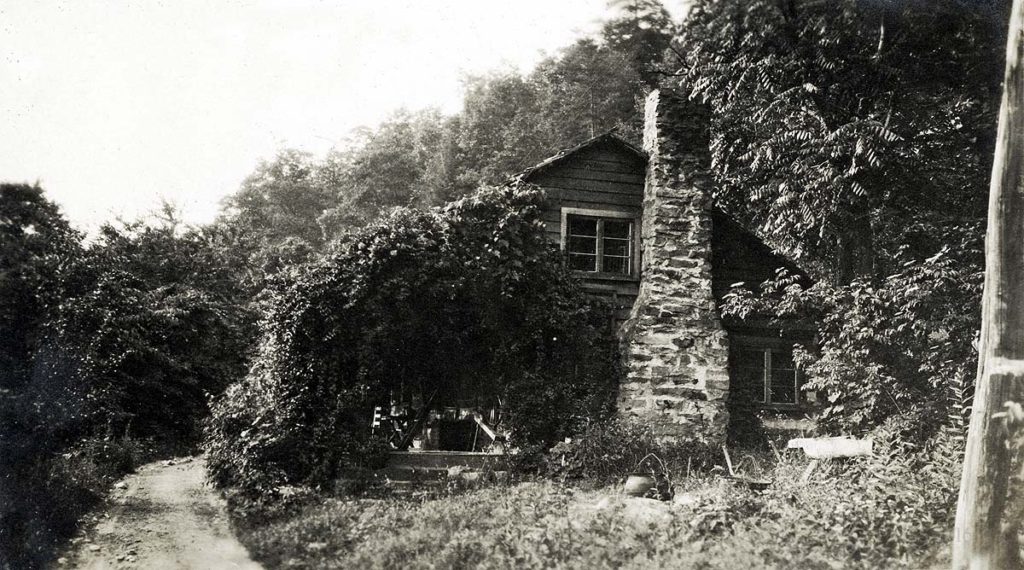 It was a gray day, with spring just beginning to bring out new shades of color in the woods and hills, and the women grouped on the porch or in the rooms, in their simple yarn dresses, clean gingham aprons, and handkerchief over their heads, must have looked much as their mothers and grandmothers did, when they came to “workings” at the same old log house years ago. Except that the eight-inch logs, hand-hewn and a century old, are a softer gray, and the yard is full of blue grass and clover, instead of being clean swept with a hickory broom, and rambling vines now cover the porch posts, the house is very little changed from the early days. A missionary barrel had been unpacked that morning, and we brought out two beautiful old quilts, “Log-Cabin” and “Rising Sun”, from Connecticut, and flung them across the rafters for our friends to criticise, and they made splashes of color against the gray wall walls of the house.

Our guests were of various types – the preacher’s wife from across the mountain, a younger woman than the rest, but dressed in a red linsey of her own weaving, and already a grandmother. She is a frequent visitor at the school, a bustling, managing woman, who brings her corn-shuck rugs and homespun yarn for sale or exchange at the school. Aunt Judy lives at the Mouth of Rockhouse, the mother of nine strapping picturesque sons. She has apple cheeks and white hair, which is unusual in a mountain woman. Whe always rides a “pieded nag” and thinks nothing of a six-mile trip on horseback, with perhaps a baby in her arms and an umbrella over her head. “A train’s alright for a short spell, but I’d a heap rather travel on a nag if I was to go a right-smart piece”, she said after her first trip by train. Aunt Judy still shapes the policies of her clan, though her children are married and settled on their own farms. 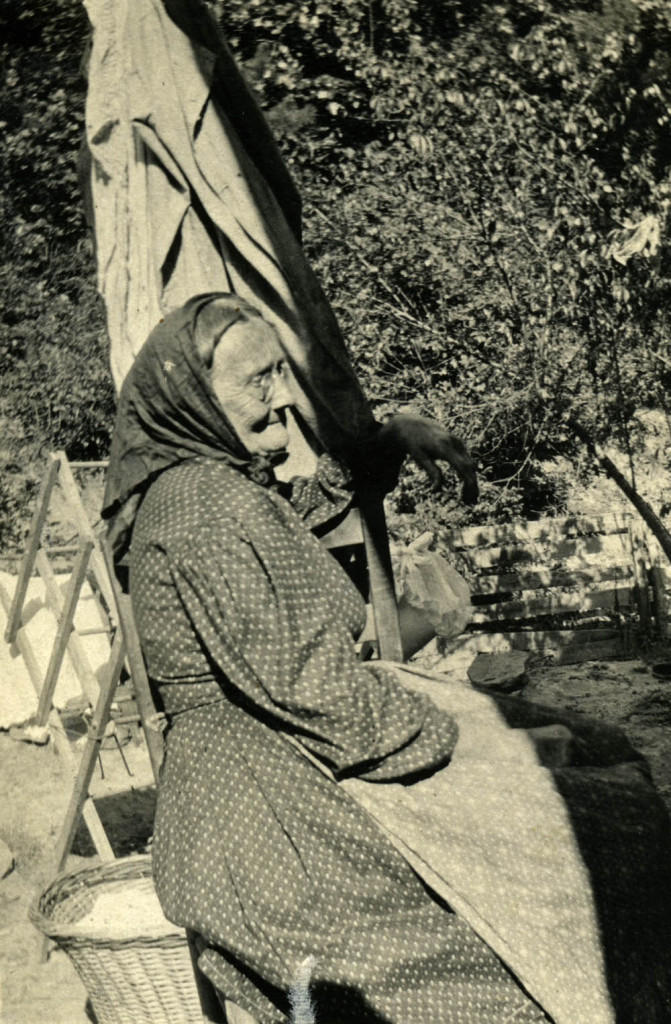 Aunt Sal was a picture, in her dark green yarn gown and silk handkerchief, smoking her pipe in the background deferred to as an authority on the preparation of the dinner, and, after some of the guests had gone, telling the best tales of all.

Aunt Marthy, tall and spare, with thin, straight features, sharp-tongued, and an autocrat in her valley is a Holcomb by birth, and comes of a prosperous farming family, Democrats and slave-owners in the early days. Then there was the grandmother of Dillard [Dillard Metcalf] a little boy who came from his home on LIttle Laurel, to stay this winter. On his way home to help make the crop for his grandmother he stopped and visited an ancient bed-ridden neighbor of ours, and we heard later of the visit. Uncle Dan said, “Dillard named a book that you ‘uns had up yader about King Arthur, an’ he giv’ it such a turrible ree-commendation that I’m bound to read hit!” Dillard, hoeing corn on Little Laurel this summer, will probably be full of tales of King Arthur and his knights for all the neighbors and children working in the field with him.

“The workin’est woman on Greasy” came too — a woman whose father was shot last spring by two young boys, whose husband had been killed by his brother, and who has know tragedy all her life. Two years ago, when we started Red Cross knitting in the neighborhood, she remarked that “hit were a pyore waste to knit up all that good cotton.” (Mrs. Tildy Harris)

Once, when Miss Pettit was crossing the mountain in a company of people, who were all going over to the trial of Tom Harris, she walked along with Old Man Harris, eighty years old. “Well, I’ve been a-goin’ across this mountain ever since I was seven, and hit’s might’ nigh always been to a murder trial.” Then he rehearsed all the stories of crime down Greasy [Greasy Creek]. Later, in the train to Harlan, Miss Pettit sat with the widow of Rat Harris, whom Tom had killed. “Well, wasn’t that a tale Old Man Harris had to tell?” she said to Mrs. Rat. “Yes, but he left out the biggest one of all the time[when] he went across to his own trial for killing my brother.”

No wonder she thought it was a “pyore waste” to knit up cotton into anything but lace; she reckoned if the in Europe was as used to shot-up people as she was, they would know better.

The dinner was prepared with regard to all available information about old-fashioned cooking, and the result was not far different fro the dinner one eats in many mountain homes today. We had every known variety of cornbread: ash cake, hoe cake and chip cake, all baked in front of the fire. We had chicken and dumplings, baked cushaw, shucky beans, coffee, and peach short-cake which is the mountain “pie.” conversation didn’t flourish at the table, the business of eating was too serious for talk; and there were various interruptions — a mule which broke loose, a fretting baby a hog in the garden. It was only when we went from the room where we had dinner, into “the other room” that the tales began as we sat around the big Hearth.

It being an old-fashioned party, we steered the stories to early times — [see above], and Old Man Harris. We started off with a story about one of the early settlers in this valley, and his coming to the mountains [See: PMSS Notes 1919]. Aunt Marthy [Martha] held us with her tales of Line Fork a generation or two ago while Aunt Sary [Sarah] would shake her huge bulk with silent laughter at each denoument, and the younger women would gasp with excitement. Aunt Marthy’s grandfather, she said with perfectly matter-of-fact tones, “stole his wife” when he was hunting over in Virginia. He met a pretty girl barefooted and bare-headed and not more than fourteen, who was out hunting the cows; made love to her, and brought her back to Line Fork and married her. She didn’t even know how to cut out a shirt. She only lived a few years.

Hardin’s second wife was Polly Adams of Whitesburg”and she was a witch ‘Old Granny-Big Poll,’ “us young ‘uns used to call her; and she witched everything She witched the cattle so they wouldn’t give milk, an’ she witched the horses so they’d lie down and die under you, an’ she witched her husband to bread , and not that sometimes.” And she had a broomstick, and cats which rose up out of the hearth when the family were gone to bed in the corners of the old log room, and the cats would sit around and watch and so did the family, from under their covers of their hand-woven blankets.

Then there was the story of the girl who ran away and married a man who wore buckskin breeches, which evidently were discarded very early for jean or woven linsey. Aunt Sal [Sally Dixon Creech] talked about “sangin’ expeditions rambling trips up into the mountains to gather ginseng root. Even when she was seven, she used to go along with little cousins and neighbors and camp on the mountain for days at a time “the other younguns always had to eat their meat without cookin’ hit but Uncle John would let me brile [broil] mine. I reckon he knowed I would, anyway.”

Our guests left us early in the afternoon for some had to travel “foot-step” long miles down the creek, and there were children at home, cows to be milked, and the men to cook an early supper for.

We hope this is the beginning of an annual event, dinner when our older neighbors come and help get dinner in the old-fashioned way at Old Log House, telling stories which will add to our store of information about life in the early times in this valley. When our construction work is done, and we can begin on what we must for the present consider as a non-essential, we shall have Fireside Industries at Old Log, and it will be the center for basketwork and weaving and rug-making, and exponentS of life in pioneer days.

DANCING IN THE CABBAGE PATCH VIII IN THE KITCHEN