She came from far over on the Divide, near Shell Branch, a distance of some six rough mountain miles from the school, to bring her products for sale — beautifully braided rugs of shining corn shucks, some with shades of natural bronze, rose and brown gleaming through the white. And she sometimes brought with them an armload of dolls all sizes and expressions, with cornsilk hair and necklaces of red corn kernels.

We looked forward to her weekly visits, partly because of her good products, always so saleable, but chiefly because of herself, for she was always gay, and full of that innate quality so many of our people have, a simple, beautiful unselfconsciousness.

We knew that she lived in a two-room house with her three children and that her husband had been in India [Indiana?] for three years. The tales she told of the endless work of the farm and the long evenings around the fire, braiding corn shucks for rugs and baskets, fashioning the poppets [dolls] so charming that “my babies they are always awanting to keep them for theirselves, to play with!” made us hesitate to accept the invitation to dinner because we knew it would add a heavy burden to her already too-full days. But mountain invitations are un-refusable. 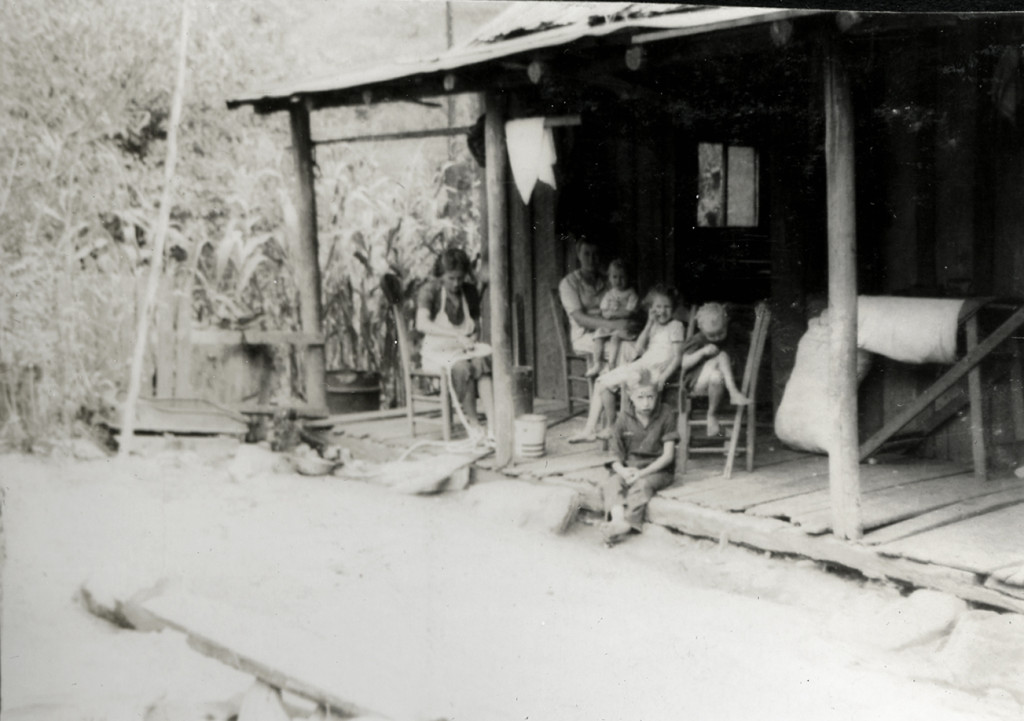 We were prepared in a way, for a lesson in self-reliance, but not for the one in living off the land which began the moment we were greeted by barking dogs and discovered a shy face under a curly top peeking around the corner of the woodshed. It was evening — almost dusky dark, but we could see the neat front yard, bare of grass, swept clean with the homemade hickory bark broom that stood sturdy and straight by the porch door. It was the only thing on the porch, which was also swept, rather scraped, clean.

The mop of curls belonged to a boy who, as he gradually emerged from hiding, looked to be about ten or eleven. There were two others, a girl a little younger and another smaller girl, just past being a baby, but they stayed behind, as the small boy came out and called back the black and white dog, and they all shrieked “Mammy, Mammy, they got here!”

Sarah was quickly at the door, flushed from cooking, but with no shred of poise lost, and greeted us cheerfully. “I was about to give you fellers up. Come inside and set down.”

“Inside” was a tiny room, dark now because it was getting momentarily shadowier outdoors, but by the changing light from the blazing open fire we could see the big double bed in the corner and the table to one side loaded with poppets in various stages of the making.

“Now set right down,” she insisted. “Glyn, you pull ’em up some chairs.”

Glyn [her son] pulled up the chairs, cane bottom with hickory frames straight and strong. We were glad to sit down and rest from our long trek. “Rest awhile till supper’s ready. Hit’s just about to go on the table.”

The children had evidently been instructed to entertain the guests while they were waiting. That started out to be the least bit awkward. We produced the usual topics — the weather, school, names, and ages, which last were a dubious success in the way of conversation.

The ice broken, Glyn took the lead, while the two girls lapsed into rapt silence, one on each edge of our little circle, gazing up at us with round un-blinking eyes.

“Does anybody use it while he is away?”

“Yes’m. Haint no wayfarin’ man agoin’ to trifle with us!” He grinned a toothless except-for-one-in-the-middle grin that expressed several things. There was deep pride in his mother’s prowess, perfect safety from evil-intending wayfarers, and there was a deeper kind of social security that comes from belonging to the right people.

We watched the fire for a moment or two. Then Glyn started bravely again.

“You fellers see the liberry table yet?”

Us fellers had, but not very clearly in the flickering firelight, so with much care he stood up on his tiptoes, reached for the kerosene lamp in the rack over the mantle piece and lifted it down while we held our breaths, to a corner of the crowded table top. The “liberry” in this family was ever so much more interesting than the usual kind for it was the most life-like assortment of little cornshuck people we had ever seen, and around the edges were all sizes and kinds of baskets. Some were standing bolt upright, some lay prone staring straight up out of the larger braided baskets. Some were themselves holding the tiniest of baskets on their stiff little shuch arms. No doubt this arrangement had been planned with care for our pleasure, and we were delighted. Glyn’s eyes sparkled, and Stella’s and Esther’s attention was drawn at last from the steady contemplation of the visitors. 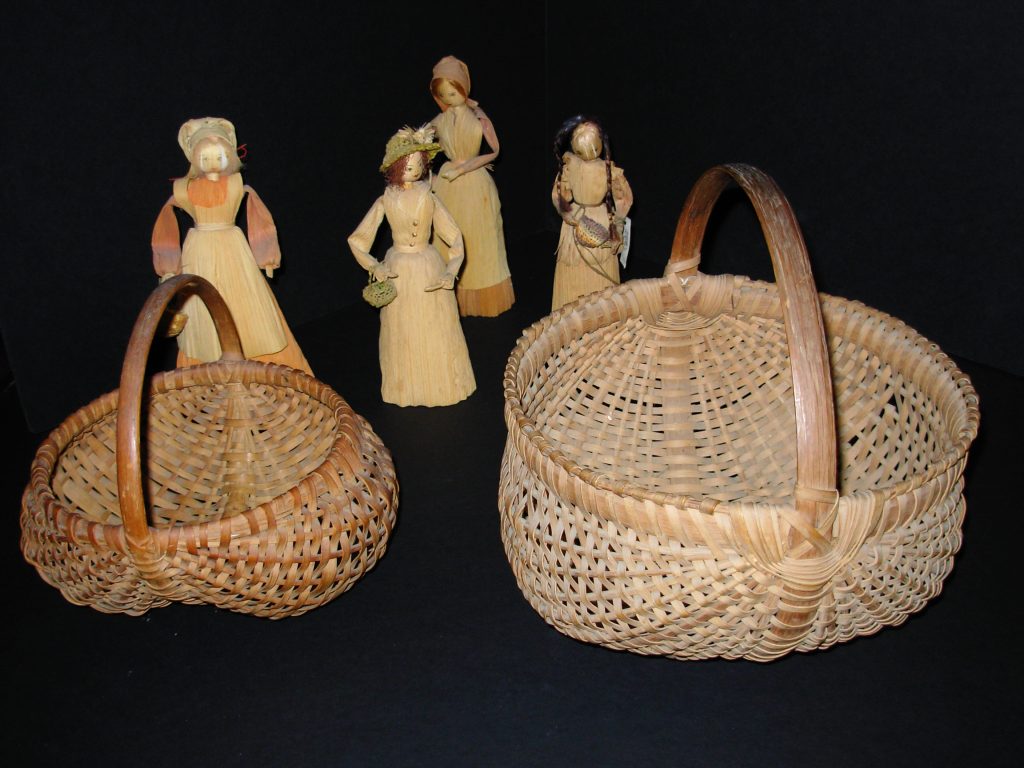 Cornshuck dolls and hickory baskets. The dolls are made by the Ritchie family, probably Kitty and Mallie and the baskets are local PMSS. [dolls_baskets_001.jpg]

“This’n’s the prettiest,” Stella remarked, touching lightly and with greatest of care the tallest doll which had flaxen silks for hair instead of red and brown like the others.

“Hit’s name’s Lauriebell!” Esther echoed in a little croon,”Lauriebell!” and reached a chubby hand for the blond tresses.

“Don’t handle that air poppet honey!” the little boy cautioned as he gently drew the reluctant fist away from the attractive lady. (The outsider in the hills can never stop being touched by our mountain quality of gentleness to little ones and old ones and sick ones!) “Hit’s mammy’s poppet, and she’s agoin’ to sell hit to the school.” 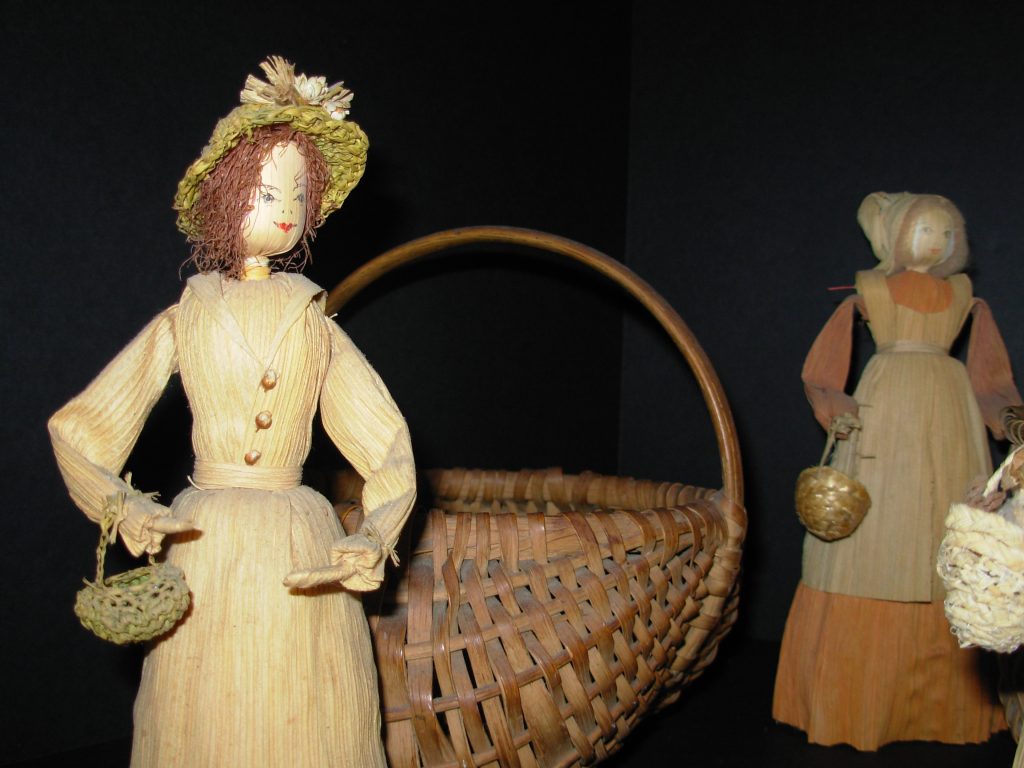 Cornshuck dolls and hickory basket. Dolls are from Ritchie family, Viper, KY and the egg basket from the Causey family, Big Laurel. [dolls_baskets_007.jpg]

At that moment, in time to interrupt what was about to be a disappointed wail from Baby, Sarah’s bright flushed face lighted the doorway.

“Come right in folkses. Supper’s all ready, and agittin’ cold on the table. Glyn, bring them chairs in here honey. (To us) “You set down now and go to eatin’ if they’s anything thar that’s fitten to eat.”

We were almost carried in on a wave of fragrance — a delicious combination of smells of all the good things in the world, sweet and sour and baked and fried. Glyn led the way with two chairs, we brought the other, and presently were seated, saucer-eyed no doubt, if there had been mirrors to see with before the round groaning table (the word is used advisedly) in the same stout chairs we had occupied in front of the fire.

The children stayed in shy stairsteps in the doorway, watching our every move. Sarah stood by the kitchen stove, her hands folded, and with dignity oversaw the banquet.

The table was without any exaggeration covered, with no spaces between dishes. A heaping dish of spare ribs joggled against a bowl brimming with applesauce. Piled up sausages on a platter were ready to tumble into the full butter crock. There was so much that it was hard to know just where to start. And amid our protests at the bounty before us, Sarah brought another dish of what looked to be quarters of fresh raw apples, offered as a special treat. We were amazed.

“Not apples at this time of year!”

“Hit’s sulpherated apples,” she explained. “They stay just like new that way.” She promised to take us out later to see her sulphurating equipment.

We began to count them to see how much of that dinner had come out of Sarah’s own farm of four acres. The chickens (there was boiled chicken, steaming and tender) she had hatched and raised in her own back yard. We saw some of their family roosting in the apple tree outside, while we ate.

“Them shucky beans,” she said. “Growed in the garden and me and the children strung them up and hung ’em out last summer.” (One has not really tasted beans until he has had the shucky kind and there is no mountain porch complete without lacy festoons of them, which like so many of the attributes of mountain life, represent combined social, aesthetic and practical values. Bean stringing is entertainment, the decoration is lovely, and they do taste wonderfully good when they are finally eaten!)

“The sausage and pork sides was from the two hogs we raised, and I butchered just last week” she went on, and then left’ her post by the stove to hasten the passing around. “Here, have some sausage — you hain’t eat nothing!”

“You mean you butchered yourself?”

Her eyes danced like Glyn’s as she nodded. “Law, yes!” Why there haint no man alive can cut up a hog as good as me. The men folks around here always calls on Miz Bailey when they got a butchering on hand to do.” (“Miz Bailey” is a mite of a person not nearly so big as an average sized hog!)

“I raised the corn and canned hit last summer, and I pickled my own beets and I raised them sweet potatoes and the Irish potatoes too.”

We went on enthusiastically to note that the eggs (a platter of fried ones, and a bowl of boiled eggs in gravy) of course came from her very own chickens, and the cornbread —

“Well, I reckon you wouldn’t hardly say hit was all mine. But hit was my corn that dried and went to the mill to grind. Hit was the meal that went in to bake!”

“Oh yes, my cow gives good milk. Plenty for butter for us and mam’s and pap’s. Have some more bread. You haint touched nary a thing seems like. course hit’s just plain country cooking but I’d hate it a sight for you fellers to go away hungry. Have some buttermilk?”

“Now you all just have some cake, if you won’t eat no more chicken or pork and beans. Seem like you’re aiming to starve.” We were faced with two enormous cakes, one dark and the other light, and a great bowl of canned peaches (from Sarah’s tree, and canned by her). It is wonderful how accommodating the stomach can be in so pleasant an emergency. We partook with gusto of the cake, which she regretfully confessed was “… all furrin ingredients, ‘cepting the lard,” and the coffee with sugar which was also furrin although she explained that as a general thing her family didn’t use “fotched on” sugar at all, but the sorghum from her own cane, made at her stiroff last September, or the honey from her two bee gums ‘robbed’ last June.

At long last it was apparent even to this Sarah Bailey that her guests could hold no single spoonful more. It was time for another move. 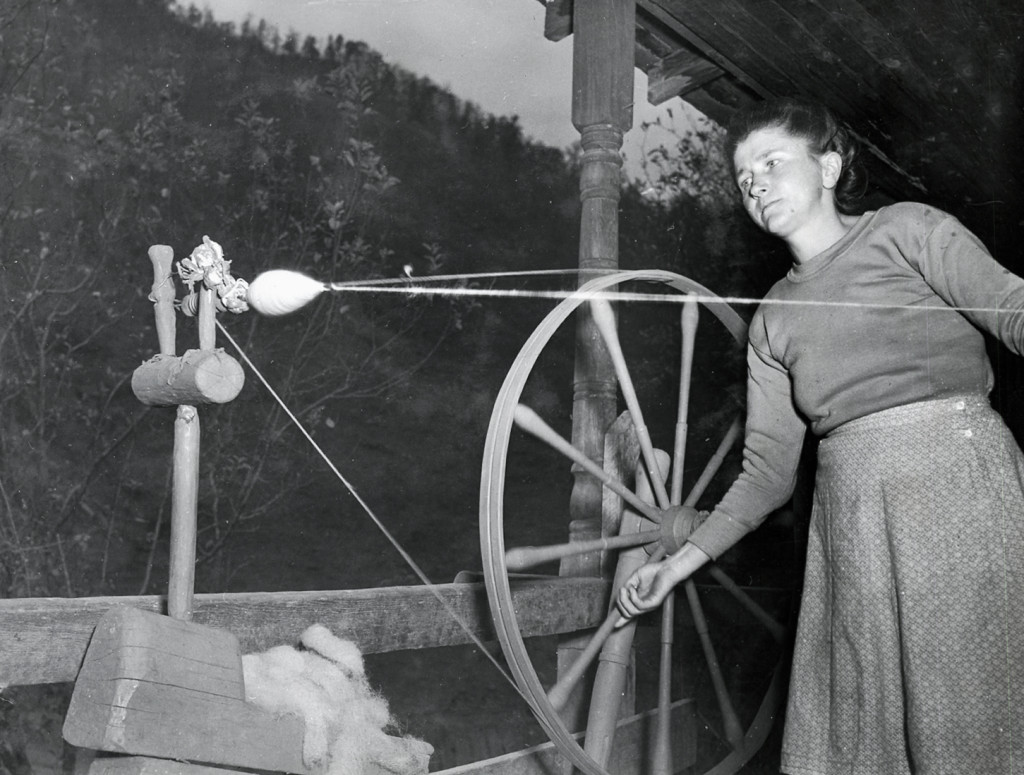 “Well, if you haint aiming to eat nothing,” she spoke with a distinct tone of reproof, “I reckon you all might want to see my canning cellar and the way I sulphurated them apples.”

Before we were well out of the tiny kitchen the children had snatched our places and were diving into the remains of the feast. Certainly, this had been no ordinary supper, but very evidently prepared for the special occasion with willing and friendly hands, prompted by a warm and welcoming heart.