In the summer of 1933 Caleb Shera and Alice Shera embarked on a 300-mile journey from Oxford, Ohio, to a place that was unlike anything they knew but one that won their hearts. 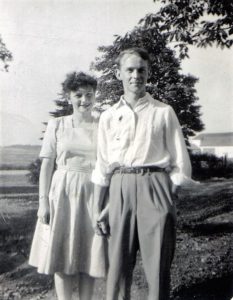 Alice Shera’s goal on this trip was to visit Pine Mountain Settlement School as a representative of a women’s church group that was sending books, clothing, and money to the School. Alice had read of the work of Miss Katherine Pettit and Mrs. Ethel de Long Zande and decided to visit the School not only to make an informed report to her Oxford women’s circle but also to apply for a job at the School.

At the time, Alice was pursuing a degree in art at Miami University in Oxford, the same college her son, George Munns Shera Jr. was also attending. Both were friends with August Angel, another Miami University student and one of George’s fraternity brothers. August describes his relationship with the Shera family in his memoir, Trivia & Me:

The Sheras were a well-known family in Oxford. Mr. [George] Shera was a member of the Oxford Bank and Mrs. Alice Shera was prominent in women’s and church circles. They owned an attractive home on a large wooded lot that was fenced off and set back from the highway…. Mrs. Shera invited me to spend weekends, holidays, and school breaks with Munns at their home. The home was beautifully furnished…. I was very proud and comfortable with the Shera family and felt as if I were one of the family.

Alice asked August to drive her and her son Caleb, then age 13, to the School in August’s new car, a gift from his mother. Having just graduated and seeking work as well as adventure, August readily accepted. In his memoir he wrote:

[Mrs. Shera] also had a self-interest in the visit, wanting to personally apply for a job at the School. It was an era of much female fascination with social work done by women pioneers -– especially with the underprivileged of Appalachia.

The trip there was slow and long, but not strenuous. As we passed through town after town, we noticed a change in building styles and began to sense that we were traveling in an area unlike that which we left….

The boarding school was situated on the north side of the geological fault labeled Pine Mountain. To traverse the mountain road at the time of my first visit was mainly on foot, mule back, or on a narrow-gauge logging dinky. Few cars drove over the rough, rocky, narrow, winding, steep road with hairpin curves that crossed the mountain. My Ford roadster was one of the first cars to drive over Pine Mountain to the school.

After traveling all day, the three of us arrived on the school grounds, which were deserted apparently because classes had recessed for the summer. I parked the Ford roadster on the gravel road opposite Aunt Sally’s cabin –the original, one-room log structure that was built by Sally and William Creech, donors of the land and advocates for a better community.

During their visit, Glyn Morris, then PMSS Director, saw an opportunity to enhance his staff with these well-educated visitors. In the course of their conversation, Glyn Morris offered August a teaching position at the School. Alice was, in turn, interviewed and also hired, but she was to begin once her studies at Miami University were completed.

A year later, both Alice at age 55 and her son, George, graduated from Miami University. Alice received a degree of bachelor of science in fine arts with a major in design, and her son a bachelor of arts degree.

As Alice and Caleb had planned, they made a second trip to Pine Mountain, this time driven there by George, and this time to stay. Alice started work as housemother and later, as an art teacher, and Caleb began his sophomore year at the boarding school.

Caleb apparently adjusted well to the School and its culture. He was mentioned in the student publication, The Pine Cone of October 1935 as having played a part in the second Tomfoolery play. During the Christmas season of 1936, he played the part of Simeon in the School’s annual Nativity Play, according to Pine Cone of 1936.

Soon after Caleb and his mother arrived at the School in the summer of 1934, Arthur Dodd, teacher and principal of the PMSS high school, invited Caleb to join him and August Angel on a car trip to Mexico. For the journey, Dodd had borrowed a Ford Phaeton touring car from a friend whom he chauffeured while at Berea College. 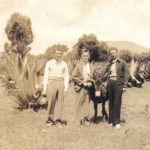 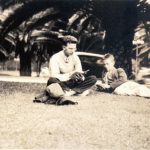 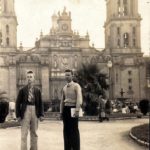 After seeing many sights and experiencing the culture in Mexico, they continued their travels in the U.S., visiting several National Parks, including Glacier National Park in Montana, Yellowstone in Wyoming and Mt. Rushmore in South Dakota. After five weeks on the road, sleeping in tents and preparing their own food, they were happy to return to the PMSS campus. 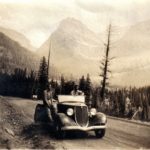 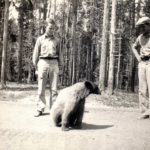 Caleb performed well enough in his studies to be selected as one of two seniors in his graduating class of 1936 to be “pushed” by the School to attend Berea (Kentucky) College. In an unsigned copy of a letter (most likely written by Glyn Morris) to the college’s registrar, dated February 15, 1936, Caleb is described as follows:

He is not a mountain boy, but he will not be able to attend college elsewhere. he is the lad that I talked with you about when you were in Pine Mountain last, very mature and ambitious. We permitted him to skip a grade here and you assured me that fact would not stand in the way of his consideration by the Entrance committee provided he could ‘deliver the goods.’

Regardless of this “push” for Caleb to attend Berea College, it was not to be. After graduating from Pine Mountain Settlement School, Caleb went on to earn a degree from Miami University in Oxford.

In 1938, Caleb received another intriguing invitation to travel. This time it was from Fred J. Burkhard, who replaced August as PMSS printing instructor when August left to teach at a Dayton, Ohio, high school for a few years. Fred invited August, Arthur Dodd and Caleb on a sailing trip to the Cayman Islands, south of Cuba. Using the same borrowed touring car that took three of them to Mexico, the group drove to Tampa Bay, Florida. There they boarded a British two-mast schooner that took them to Cuba, the Grand Cayman Islands, the shores of the Yucatan Peninsula and back to Tampa. This remarkable trip, as well as the visit to Mexico and their idyllic times together at PMSS, cemented friendships among the intrepid travelers that lasted for the rest of their lives.

As of the 1940 U.S. Census, Caleb was living in Oxford with his uncle, father and brother, George Munns Jr. and working at a bank. Eventually, he married Virginia Forsyth Shera (1918 – 2012), a 1940 graduate of Miami University. They had five children: Kathleen, Victoria, Michael, Thomas and John.

By the time Caleb retired, he was vice president of Panasonic Corporation of North America, Inc., a worldwide provider of consumer electronics and lifestyle products.