Lucretia Garfield was born on January 18, 1894, in Ohio. The daughter of Harry “Hal” Augustus Garfield and Belle Hartford Garfield, Lucretia came from a remarkable legacy. Harry, her father, was President of Williams College in Williamstown, Massachusetts, and the son of President of the United States James Garfield and his wife Lucretia, or “Crete” Garfield. 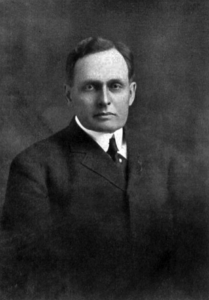 Born October 11, 1863, Harry Augustus Garfield (Hal) was, in addition to the President of Williams College from 1908-1934, a lawyer and an active player in the Federal government. As the Director of the Federal Fuel Administration, he was charged with oversight of the coal-fields during WWI including the influenza pandemic of 1918-1919. His brother James Rudolph Garfield, Secretary of the Interior, was his law partner and was instrumental in his placement as the first head of the Federal Fuel Administration, an office created by Woodrow Wilson to address potential fuel shortages during wartime. He was married to Belle Hartford Mason, his second cousin, and they had four children: James Garfield (1889 – 1976), Mason Garfield (1892 – 1945), Lucretia Garfield Comer (1894 – 1968), and Stanton Garfield (1895 – 1979). Lucretia, as the only girl and the third child, had a special place in Harry’s attention… and in Harry’s work in the coalfields.

Among her father’s responsibilities as the chief administrator of the Federal Fuel office, Garfield was charged by Wilson with the oversight of the coal supplies in the country during wartime. It was an enormous task as the demand for coal to support the production of steel had to be rapidly ramped up at a time when immigrant labor was being drained from the mining operations. In the midst of this crisis, came the so-called “Spanish Flu.” The combination was devastating to the economics and labor supply in the Eastern coalfields, many of which were just being started in Central Appalachia in the bituminous coal fields.

Garfield’s duty was to conserve the coal supply and keep the price within reasonable bounds. Local committees were appointed throughout the country to study local conditions and their reports formed the basis for the prices fixed in different localities. The ensuing winter was unusually severe, and serious shortage of coal threatened. Because of the shortage of coal in the northeastern United States, especially in New York City and Ohio, Garfield’s administration of the office was severely criticized in the press, but an investigation by the United States Congress showed that the shortage was due to failure of the railroads to meet the extra demands upon them, and federal control of the roads was instituted on December 28, 1917. Garfield also issued his “idle Mondays” order in January 1918, which closed non-essential industries for five consecutive days beginning January 18 and on every Monday thereafter up to March 25. This roused a storm of protest from many manufacturers, and the U.S. Senate voted a resolution, requesting postponement, but this reached him after the order had been signed. On February 14, however, the order was suspended and priority for certain shipments substituted. He disapproved of the method of settling the coal strike in December 1919 and resigned his office, resuming that of president of Williams College. [Wikipedia, Accessed 2016-02-03]

Like his father President Garfield, Harry had a strong sensitivity for the working class and the inequities that industrialization was exercising on the country. That his daughter showed the same social justice inclinations is not surprising. That she was an independent and assertive young lady is also not surprising. That she chose to come to Pine Mountain is only a little surprising. Her grandfather had served in Eastern Kentucky during the Civil War and her father had traveled there as a young man and later in his Federal role. Lucretia was only two generations away from a family that had a hard-scrabble life and had found a way out of poverty. Both father and daughter had an affection for the Appalachians.

Named for her grandmother Lucretia, wife of President Garfield, she had many of the same disciplined and devoted characteristics as her relatives. She never knew her grandfather, who was assassinated before she was born, but, as the only daughter, she was strongly influenced by her father.

The portrait below is of “Lucretia Garfield,” grandmother of Lucretia Garfield Comer, for whom she was named. Lucretia, wife of James A. Garfield died March 14, 1918. Photo: Library of Congress Prints and Photographs Division. Brady-Handy Photograph Collection. http://hdl.loc.gov/loc.pnp/cwpbh.04025. CALL NUMBER: LC-BH826- 30278 A 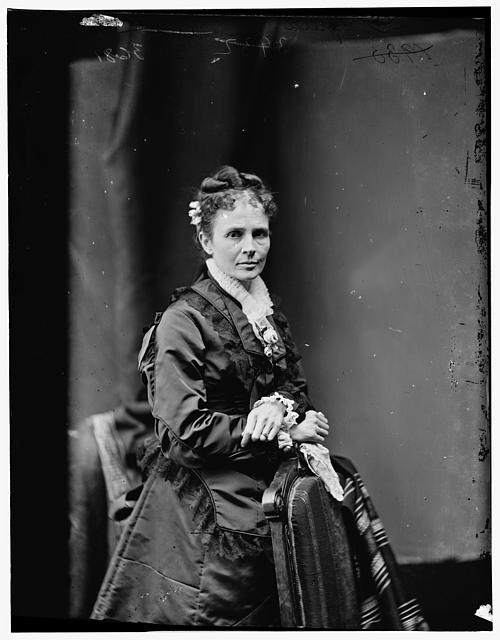 Just how Lucretia characterized her experience at Pine Mountain may not be fully known, but it is not inconsequential that she would have been able to provide her father with sensitive, first-hand information about the ongoing issues in the eastern Kentucky coalfields following his return to his academic duties. The political and social turmoil associated with the local fixing of coal prices and its effect on families in the Appalachian region and the massive loss of lives in the pandemic of 1918-19 was ongoing. It is also not inconsequential that her father was a professor of Political Science at Princeton from 1903 to 1908 where he had befriended Woodrow Wilson, then serving as president of Princeton. It was through his friendship with Wilson that he was called from Williams College to go to Washington. On his return to Williams College, Garfield served as the president of the American Political Science Association from 1921 to 1922.

The Garfield family was from Hiram, Ohio, where they were connected to the church of the Disciples of Christ. President James Garfield married Lucretia Rudolph whom he met at college. Lucretia’s grandmother “Crete,” as the First Lady was affectionately called, was a bereaved widow following the assassination of her husband on July 2, 1881, and never fully recovered from the tragedy. Lucretia, her granddaughter and namesake, was one of her primary caretakers.

It was one year following the death of her grandmother that 25-year-old Lucretia came to Pine Mountain as a summer worker. She was a graduate of Bryn Mawr College and had served for a brief time in the War Relief Service but had little work experience beyond that. She was charged to establish and run a Girl Scout program for the School and later was mentored by Ethel de Long Zande as a fund-raiser for the School. The Pine Mountain work was apparently one of her first experiences in a hired position. According to the records at Pine Mountain, Lucretia was a lively, competent, and engaged worker at the School — well-liked by her colleagues.

She was recommended for the Pine Mountain position by Helen Storrow, the Commissioner of the Massachusettes Council of Girl Scouts. She had received a letter from a Mrs. Peabody who recommended that Pine Mountain explore enrolling girls from Pine Mountain in the National Girl Scouts of America and that an agent be sent to the School. She recommends Miss Garfield as a “captain” to get the program going at Pine Mountain and advises that she will send literature on the national program.

Ethel de Long Zande quickly replies that she has met Miss Garfield and believes she would bring special talents to the School. However, she advises Mrs. James J. Storrow that the School is still “more or less in the pioneer state and must have people who are very, very adaptable, — who do not mind having the unexpected thrust upon them, who can go to breakfast at six o’clock in the dark and don’t mind if their handkerchiefs are unironed!”

Lucretia arranges to come to the School and Pine Mountain arranges to get her safely over the mountain, as mandated by her mother. She is assigned work as a teacher and recreational specialist to work with the younger children.

Lucretia responds that she has no experience as a teacher but does have playground experience and Scouting experience. She then plans to have an intensive training session with Mrs. Storrow who is a leader in folk dancing and singing games in the manner of the English Country Dance movement (Cecil Sharp). She suggests a late October arrival at the School.

Lucretia writes to Zande on October 17 and advises that her mother is ill and she will need to delay her trip. Lucretia suggests that as she monitors her mother’s health that she could do some fund-raising for the School. Ethel Zande empathizes with Lucretia telling her that her own mother had to be hospitalized for anxiety and she understands.

When Pine Mountain wrote to Lucretia for her educational certificates and credentials, they were sent by Miss Garfield and included:

The correspondence continues with Lucretia into 1921 when Ethel Zande writes that she is sending promotional material to Lucretia to be distributed at the Pine Mountain fund-raising teas she is holding in various cities in the North East. She continued corresponding with various PMSS staff through the years, her last letter written in 1958 to Burton Rogers, then PMSS director.

Following her work at Pine Mountain, Lucretia returned to Williams College where she worked for the college, spent time with her father and undertook a biography of him. The book was later published in 1965 under the title Harry Garfield’s First Forty Years; Man of action in a troubled world. (1965). It was on her return to Williams College that she met and married John Preston Comer on December 25, 1925, an Assistant Professor of Government at the college. John Preston Comer was born September 6, 1888, in Johnston City, Texas, and died May 1976 in Charlottesville (Albemarle County), Virginia. 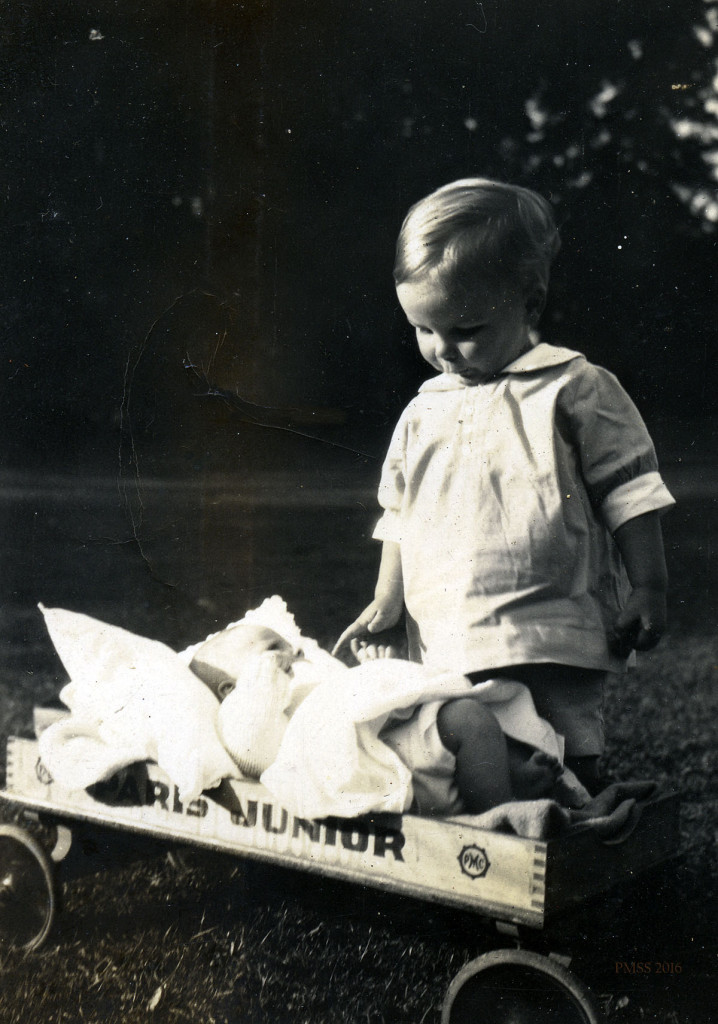 Lucretia Garfield stayed in touch with Pine Mountain for many years. In the late 1920s, she sent a photograph of her two children to the School. Located in a photograph album, identified as “Second Generation” Photograph Album, the portrait of the two children is charming. The photograph of John “Jack” P. Comer, born in Brookline (Norfolk County), Massachusetts, on October 23, 1926, and his sister, Mary Laura Comer, born in 1928 in Williamstown, Berkshire, join other “second generation” children of staff and community in the small photograph album located at Pine Mountain. A third child, Elizabeth Comer, not shown in the album, is the youngest child of Lucretia and John, born September 3, 1932. The photograph above is also tinged with sadness for it was reported in the bulletin of Bryn Mawr College, Lucretia’s alma mater, of the death of her daughter Mary Laura in Italy.

Mary Laura Comer, two-and-a-half-year-old daughter of Lucretia Garfield Comer, died of pneumonia at Portofino, Italy, on January 8th. Professor Comer is on sabbatical leave for the present academic year, and he and Lucretia, with their two children, were spending the winter in Italy at the time of little Mary Laura’s death.

Lucretia Garfield Comer died on January 23, 1968, at the age of 74. She was the sister of James Garfield; Mason Garfield and Dr. Stanton Garfield.