In 2007 Pine Mountain Settlement School received a letter from Linda Duckworth, a descendant of the Lewis Family in the Pine Mountain valley. Like so many families in the valley, and most anywhere in the world, Linda Duckworth was seeking additional information on her family but she also provided useful information about the family history for our School records. Ms. Duckworth also sent along two photographs of her grandmother and great uncle who were students at the School from 1914 to about 1920.

John Clyde, Rhoda Melinda and especially Dosha appear in many of the candid photographs taken by staff of the children who were early enrollees in the School. Further, the letters of these same early workers abound with accounts of the children who were some of the first boarding students. Sometimes the names of the children were disguised, but often they were called by their given names. In the case of Rhoda Melinda, Dosha, and John Clyde, their names appear frequently. One such occurrence is in a 1916 letter written by Marguerite Butler, providing some insight into the lives of the students:

Last Sunday morning before daylight Dosia, John her brother, and Becky May (Dosia’s age) ran off. They were homesick and hadn’t been allowed to go home on account of smallpox on their branch. The youngsters slipped off before a soul knew it. Of course Miss Pettit is away now and we hated to have her come back to find part of her family gone so Wednesday at 11:30 I set out on Bobby, Miss deLong‘s horse. after Dosia.

It was very cold and the roads were bad and creeks worse. It was 2:30 when I got there — eight miles away — and Dosia was so ashamed she couldn’t look at me. I asked her if she wanted to come back and it just took a second to say “yes” and in she flew to get ready. Honestly I never saw anyone get as dirty in three days as she did. Of course she had slept in her clothes. There had been nine living in one room. I brought her home on the horse behind me. John is coming today.

The 1921 edition of Pine Mountain Settlement School Notes tells us about Rhoda Melinda as a young weaver:

Before you round the bend of the road that hides you from the Old Log House, the thump of the batten tells you that the looms are busy. By the doorstep, hands of yarn simmer gently in the dye-pot. On the porch, hung on wooden pegs, reels, chairback, — anything that will hold them, — are the long skeins already colored with madder, hickory, walnut and other colors that in these days of autumn glory are close kin to the woods that surround us. Four of our children are weaving these days. Arlena and Rhoda Melinda are copying ancient striped blankets, throwing their shuttles almost as skillfully as their grandmothers might have done. Grace is a true enthusiast, a stern critic, too, of what is a spurious introduction into this ancient mountain craft, and what truly “belongs.” Ralph, only eleven, is at work at the clumsy old colonial loom, his bare feet hardly able to “trop the treadles.” His sample is a scrap of cotton counterpane rescued from an old patchwork quilt, over a hundred years old.

The parents of the Lewis children were Bud Lewis and Cinda Lewis. As of the 1910 U.S. Census, the family, consisting of three daughters and one son, was living in Leslie County, Kentucky. The children were listed as Ethel, the oldest at eleven years old, “Johnny,” [John Clyde] six years old, Dosha, four years old, and “Linda,” [Rhoda Melinda] the youngest who was born the same year as the census.

We appreciate inquiries and contributions such as Linda Duckworth’s and hope that in this digital presentation we have been able to share images and accounts that will be of interest to families related to the Lewis’s and who have an interest in the life in the Pine Mountain valley in the first two decades of the twentieth century. The Lewis children were among over 100 children who were educated at the School in its early years and who are now being rediscovered by family through this digital collection. 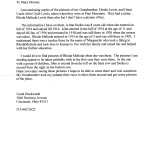 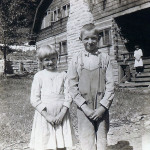 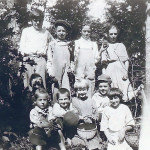 I am enclosing copies of the pictures of my Grandmother, Dosha Lewis, and Great Uncle John Clyde Lewis, taken when they were at Pine Mountain. They had a sister, Rhoda Melinda Lewis there also but I don’t have a picture of her.

The information I have on them is that Dosha was 8 years old when she entered in fall of 1914 and stayed till 1916. John entered in the fall of 1914 at the age of 11 and stayed till Jan. of 1916 and returned in 1918 and was still there in 1920 when the census was taken. Rhoda Melinda entered in 1915 at the age of 5 and was still there in 1920. I understand there was teacher there by the name of Marguerite [Butler] who took a liking to Rhoda Melinda and took her to Kansas to live with her family and raised her and helped with her future education.

I would love to find pictures of Rhoda Melinda when she was there. The pictures I am sending appear to be taken probably within the first year they were there. In the one with a group of children, John is second from the left in the back row and Dosha is second from right on the bottom row.

Hope you enjoy seeing these pictures. I hope to be able to come there and visit sometime. My Grandmother took my parents there once to show them around and got some pictures of the place.

Lewis Children in Photographs from the PMSS Collection