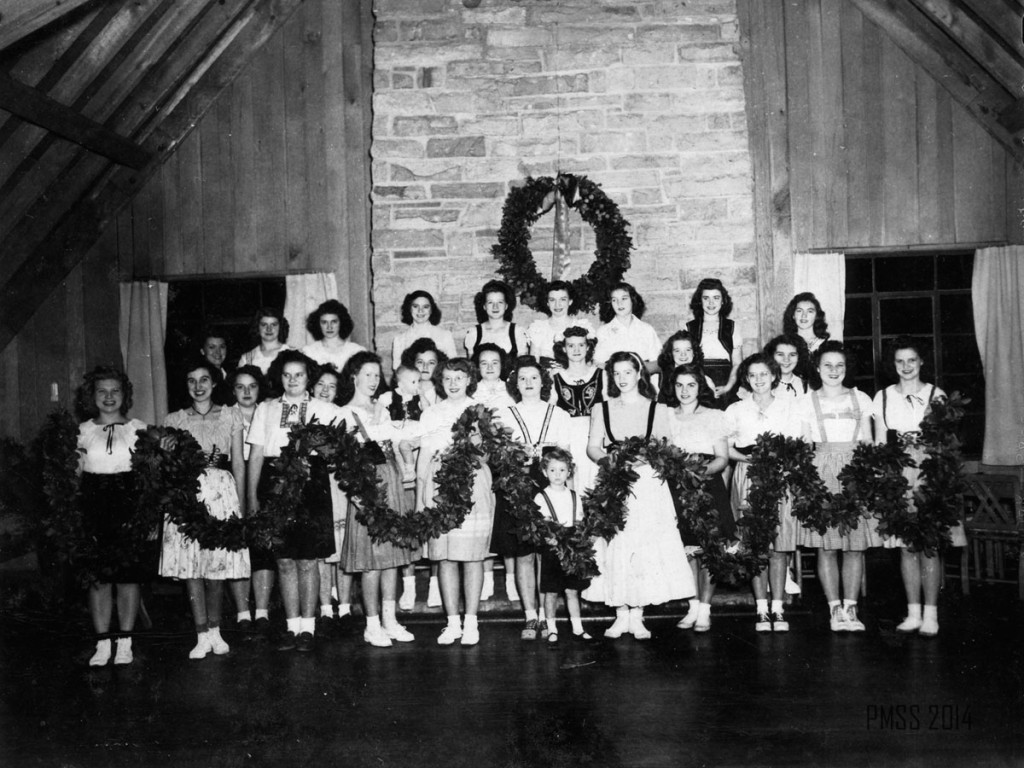 The singing of “The Holly and the Ivy” was a tradition during the early years of the School at Pine Mountain Settlement. It was no longer performed following the closing of the boarding school in 1949. The Christmas ritual included assembling swags and wreaths of holly and English Ivy that was carried into the Laurel House [both Laurel House I & Laurel House II] hall and ceremonially presented while singing “The Holly and the Ivy,” and then draped over the balcony of the main dining room. The presenting of the wreaths were accompanied by the song, “Ye Shepherds, Leave the Care of Flocks so Fleecy.” The ceremony is described here in an early account:

Second verse begins and on the words, “…and Mary bore sweet Jesus Christ…”, the girls begin distributing themselves at equal distance along all three balconies [Laurel House I].

Third verse is begun and on the word “…blood…” the wreath is lifted and hung i place. On the chorus of this verse the girls again march the respective groups A and B to the small balconies.

Fourth verse is sung by two girls in group A with everyone coming in on the chorus.

Fifth verse is sung by two girls in group B with everyone coming in on the chorus,

The Sixth verse is repeated until the two groups march down the two flights of steps and arrange themselves around two tables prepared for them facing the court.

The girls were then followed by the boys. From 1930 to 1937 the boys were from Farm House and from 1942 until 1948 the “boys” were the men workers at the campus. Their ritual is described here:

The Gentlemen are dressed in heavy winter attire which includes topcoats, scarfs, gloves and toboggans. They begin singing “From Far Away We Come to You” at the end of the terrace [of Laurel House I] and enter the dining room bearing a Christmas tree. This is placed in the proper place and decorated with Christmas tinsel and electric lights.

They continue singing until the entire tree is trimmed and until they exit down the wooden stairway. A few minutes later they return to the dining room and sit at a table reserved for them.

The men’s contributions are then followed by a traditional Mummer’s Play. See CHRISTMAS MUMMER’S PLAY for full details.

“Ye Shepherds Leave the Care of Flocks So Fleecy”

Following the MUMMER’S PLAY, a carol is sung by girls representing the Junior Class at the School. The carol, “Ye Shepherds Leave the Care of Flocks So Fleecy,” and the ritual is described as follows:

The carol is sung by the girls in the Junior Class. They are dressed in their evening dresses and assemble before the pillar adjacent to the wooden stairs, Each girl is carrying a wreath, Two leave at a time to hang their wreaths in the proper places and upon returning fall in at the rear of the line, The singing continues all the time and as they exit. They return to a table reserved for them. 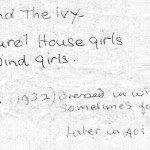 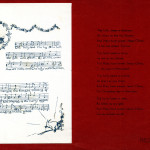 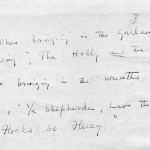 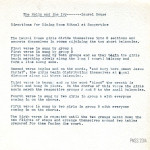 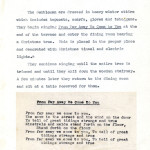 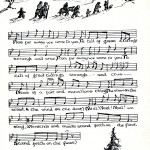 From Far Away We Come to You …” Drawings by Mary Rogers. [christmas_998e.jpg] 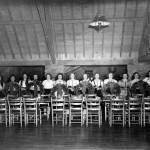 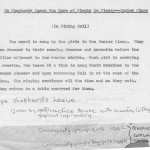 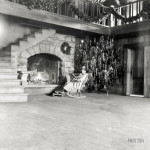 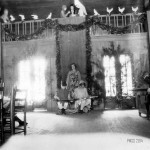 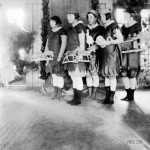 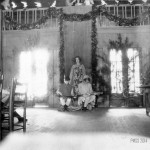 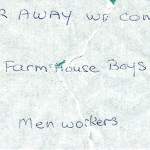 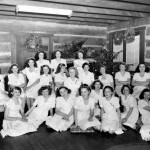 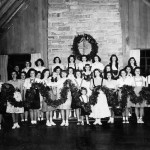 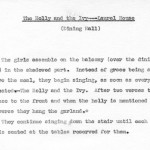 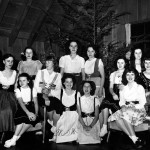 Return to GUIDE TO CHRISTMAS AT PMSS