Louise’s experiences as housemother to a group of young children are vividly described by her in a letter to her mother, written in the 1930s. The following excerpt from that letter recounts early-morning preparations of the housemother and children to attend breakfast at Laurel House:

Twenty minutes to get dressed! I dressed quickly, and fastening my collars as I went, snatched up the bell, rang it vigorously, then rushed on to light the hall lamp and be ready for the children. You see, we have to rise ten minutes earlier than the five-thirty rising-bell, in order to get over to Laurel House on time. “‘Miss Merrill, Linda says she’s got the chicken-pox and don’t feel like getting up,” “Miss Merrill I can’t find my stocking,” “Miss Merrill, this button’s off,” “Miss Merrill, I’m freezin’,” are some of the things I hear and at the same [time I] issue orders like this: “Maud, see that every child’s nose is blown,” “Iona, have the girls left their wash-basins and soap-dishes clean,” “Grant, are the boy’s teeth and washstands clean, and are their beds turned back to air?” “Laura, are the windows all open?”

The breakfast bell rings, and the larger boys and girls help the little ones with their wraps.
Then we start on, and are overtaken by Maud, who reports that the lights are out, the screen’s on the fires and there is no water on the floors. (We can’t have nice oiled floors if the water is left on them, so we are particular to get it wiped up.) And I walk on, my disturbed nerves are soothed by the rippling of Isaac’s Run and the twinkling of the stars.

Her married name was recorded as “Mrs. B. M. Bartlett.” After leaving PMSS, she worked as a librarian in Newport, New Hampshire.

Other “Merrills” and “Bartletts” have been found in Pine Mountain School records. According to the PMSS Staff Directory, Miss Josephine Merrill was Louise Merrill’s sister. She began working in 1931 at the Medical Settlement at Big Laurel. In 1933 her position changed to housemother at Boy’s House which lasted until 1946, followed by two years as a teacher of English, Bible and History in 1947-1949. Personnel files indicate that she was at the School until 1954. Before coming to Pine Mountain, Josephine had earned a B.A. degree at Wellesley College in Massachusetts. Her summer address was “in care of” her sister, Mrs. B.M. Bartlett in Newport, New Hampshire. She died in 1954, the last year of her stay at Pine Mountain.

Miss Helen Bartlett (Mrs. Norman Johnson) worked in the Office as a secretary in 1943 and 1944 as noted in the staff directory and her personnel file. The PMSS staff directory also states that she is the “possible niece of Josephine [Merrill].” Her last known address was Northwoods Narrows, New Hampshire.

Ellen Merrill was a teacher in 1913, the year before the School was founded. Her name appeared on a “List of Workers to 1928.” Also, a personnel file exists for Barbara Bartlett, a staff member in 1929-1933. It is not known whether either of these two persons were related to Louise and Josephine Merrill. 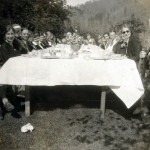 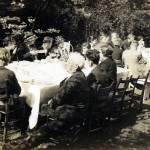 THIS INFORMATION HAS NOT BEEN CONFIRMED

Who is Ellen Merrill, listed as a teacher who came to PMSS in 1924  Did Louise Merrill come after 1933?  LOUISE = SHE IS SISTER OF JOSEPHINE MERRILL Not sure about Ellen ??

“Louise Moody Merrill diary of 1924, (HSS)” – Cited in All That Is Native and Fine: The Politics of Culture in an American Region by David E. Whisnet (Google search result for “Louise Moody Merrill”)  – HSS = Hindman Settlement School Archives. David Whisnet mentions her but she doesn’t show up in Hindman record … mention of use of her diary from Hindman [?] but not in Stoddard’s book  .. says HSS  Hindman Settlement School.

Was she older and married? Maiden name “Moody”?

See also: “MERRILL – ‘DEAR MOTHER’ LETTER,” a letter from Louise Merrill to her mother, describing a day in the life of Pine Mountain Settlement School. [in progress]