Three days after Hubert Hadley became the director of the Pine Mountain Settlement School, he wrote a letter, dated June 4, 1930, to Esther Epstein. At the time she was working at the Carcassonne Community Center in Gander, Kentucky, where Hadley had served as the superintendent before coming to Pine Mountain. Founded in 1923, Carcassone was a community and boarding school that, like Pine Mountain, stressed industrial training as well as academic work.

In his letter, Hadley asked Esther if she was still interested in taking charge of the music work at PMSS. In addition, Hadley’s wife and their two daughters were eager to resume the piano lessons that they had received from Miss Epstein during their time in Gander. To further persuade her, he wrote, “I know you will find the work even more interesting here than at Carcassonne.”

His letter must have convinced her, as Esther accepted his offer of the Pine Mountain teaching position. To prepare for her new venture, she asked about “the sort of music they like. Are the students as a whole more advanced than Carcassonne, are their tastes much the same, etc.” In answer, Hadley wrote that Pine Mountain is trying to encourage more appreciation of classical music, writing, “and this will, I am sure, be right in line with your own feeling.”

Apparently, Esther taught music appreciation classes at PMSS and provided private piano lessons, as indicated in Hadley’s letter. Also, Marian Purbrick mentioned in a January 1932 letter to then-Director Glyn Morris that she was enclosing a $2.50 check for Polly Wilder’s music lessons. Esther stayed at Pine Mountain Settlement School for two years, from 1930 until 1932.

After serving a little less than a year as PMSS Director, Hubert Hadley returned to Carcassone Community Center as an executive in 1931.

After leaving PMSS, Esther kept in touch with the School for several years, asking for updates of the School’s activities and staff, helping with fundraising efforts, and sending donations. In the spring of 1939, she wrote to Director Glyn Morris, asking if she could return as a volunteer worker. Unfortunately, he had no openings for volunteers at the time. He concluded his reply by telling her “Pine Mountain has changed somewhat since you were here but I think you would be pleased with all the additions which have been made.”

The father was proprietor of “L.M. Epstein Company, Dealer in Dry Goods, Clothing, Shoes, Hats, Furnishings, Goods, Notions” in Midway, Woodford County, Kentucky. His children often helped with the business, with Yettie as salesperson and Sarah as bookkeeper. As of the 1910 U.S. Census, the mother is no longer listed in the household. A letter dated September 1931 in the PMSS Archives (Margaret Kraatz Wright Correspondence) mentions that Mary Epstein was institutionalized with mental illness.

By 1940, the three sisters were living in the family home on Winter Street in Midway, Kentucky. Yettie Epstein, age 54, was recorded by the U.S. Census as the current owner of the ready-to-wear business. Esther, age 45, was teaching music at home. And Sarah, who previously was living in Cincinnati, had joined her sisters but was not employed at the time.

The Kentucky Vital Records indicates the date of Esther Epstein’s death as November 2, 1976, at age 83.

[Note: Letters from PMSS staff in the PMSS Collections are carbon copies, typewritten, unsigned, and meant for the Office files. The original signed copies were sent to the correspondents. The initials at the bottom left of most PMSS letters indicate the writer (along with initials of the secretary). For example, “HH” are the initials for Hubert Hadley, ”M” or “GAM” for Glyn A. Morris, and “EKW” for Evelyn K. Wells. Letters from Esther Epstein are handwritten and original.]

001 June 4, 1930. To Miss Esther Epstein, Midway, KY, from HH (Hubert Hadley, Director), who hopes Epstein is still interested in taking charge of the music work at PMSS. Mrs. Hadley and their daughters (Dorothy and Dixie) are eager to resume their piano lessons. “I know you will find the work even more interesting here than at Carcassonne (Carcassonne Community Center).” He hopes she will visit and gives travel instructions by train to Putney, KY, then a logging train to the school.

002 June 20, 1930. To Hadley from Epstein, who is still interested in work at PMSS. She would like to discuss “the sort of music they like. Are the students as a whole more advanced than Carcassonne, are their tastes much the same, etc.”

003 June 30, 1930. To Epstein from HH (Hadley). He answered her questions about the type of music at PMSS by using suggestions from Miss (Ruth Elizabeth) Campbell “who has been here for a number of years. … Pine Mountain has tried and is trying to develop more of a classical appreciation, and this will, I am sure, be right in line with your own feeling.”

004 N.D. To Hadley from Epstein on letterhead for Lafayette Hotel Co., Lexington, KY., but gives her address as ℅ Dr. J. Goldberg, Ashland, KY. Asks when other teachers will be traveling to PMSS, such as Miss (Margaret) Motter. It would be inconvenient to travel with Miss Pryor or Miss Semones.

005 December 29,1930. To Epstein in Ashland, KY, from HH (Hadley), who encloses an announcement to students and workers and suggests she travel to PMSS with Miss Motter, who is in Frederick, MD, or Miss (Marian) Kingman.

006 May 23, 1931. To Epstein in Midway, KY, from EKW (Evelyn K. Wells), Acting Director, thanking Epstein for her report of the music students; asks about Bernice, who is missing from the list. Suggests several books to give her “some ideas of a new approach to our children”:
English Folk Song – Some Conclusion by Cecil Sharp
Folk Songs of English Origin from the Appalachian Mountains by Sharp and Campbell
The Southern Highlander and His Homeland by Campbell
Country Dance Book by Cecil Sharp. (Intro to Part V – an article on the running set.)

Also suggests: “Any articles by Thomas Whitney Surrette on the subject of teaching singing and piano in schools” and an article by Ruth Doing on teaching rhythmic to young children in the February issue of Progressive Education.

Wells encloses a card for Epstein to sign and return. Because a new director will begin when school opens, Wells is asking staff to sign a “statement of their understanding with the school.”

008 August 11, 1931. To Morris from Epstein, who describes her schedule for traveling to Harlan, then a bus for Laden.

009 August 14, 1931. To Epstein from “M” (Morris), telling her of other workers who will arrive at the same time that she does: Miss Motter, Miss Emily Hill, and the housemother for Boy’s House, Mrs. Winifred Powell who has been working with Miss Wells this summer in Maine. He suggests Epstein write to Mr. Gilbert Lewis “for conveyance over the mountain.”

010 February 11, 1936. To Morris from Epstein in Midway, KY, who had received material to use for PMSS fundraising. She has been distracted by other community needs – soup kitchens, clothing, etc. – but may be able to help “when the weather clears up.” Many have shown interest in PMSS, including the Women’s Club; she will send Morris a mailing list for the April letter. Asks for PMSS updates; enclosed gift of $1.00.

012 N.D. To Morris from Epstein on letterhead for “L.M. Epstein Company, Dealer in Dry Goods, Clothing, Shoes, Hats, Furnishings, Goods, Notions. Midway, Kentucky.” Miss Epstein asks if he would let her come to PMSS as a volunteer worker.

013 April 1, 1942. To Epstein from (unsigned), telling her there is no vacancy for a volunteer. “Pine Mountain has changed somewhat since you were here but I think you would be pleased with all the additions which have been made.” 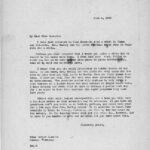 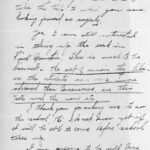 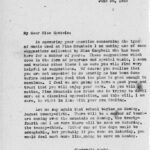 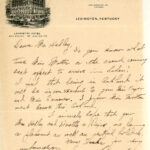 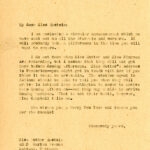 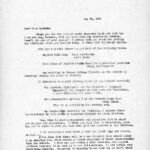 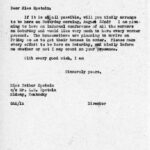 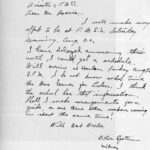 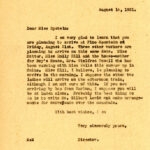 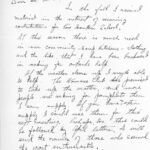 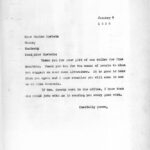 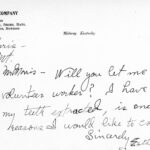 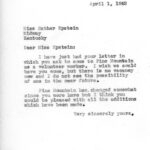