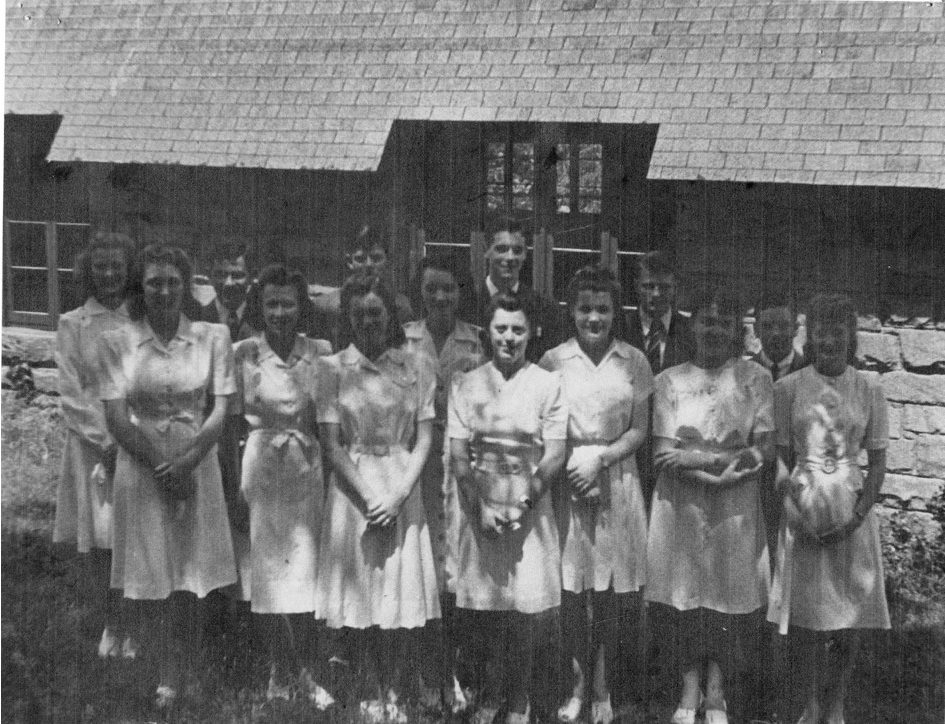 Our problems and opportunities have multiplied together, as the world has come to us by way of the railroad, the road, the radio, and the telephone.

Here at Pine Mountain, the great difference between 1915 and 1941 is that we are no longer apart and protected from the main current of the industrial revolution.

…[F]or us this chapel is the symbol of those things
That do not change — that are eternal,
Often we shall return to it in spirit
Remembering friendships, wise counsel, gentle correction
And five happy years spent in Pine Mountain
1936-37; 1937-38; 1939-40; 1940-41.
We leave you with open doors such as we entered.
We leave this gift as a token of our appreciation.

Mr. [Glyn] Morris, Friends!
We take with up these diplomas, but we will take far more —
Respect for the dignity of work, for the rights of others,
For the worship of God —
The Spirit of Pine Mountain.
– WE CAME TO PINE MOUNTAIN, Page 36.

The commencement program to be held in the Chapel on May 23 will be different from any other graduation program held at Pine Mountain. Every senior is busy on the plans for this final activity in which all will participate.

Senior activities will start May 3, with the selling of May Day special sandwiches and soft drinks, to campus guests and students. The following Saturday the class will enjoy the traditional one day trip. This year the seniors plan to discover the thrills of Norris Lake by boating and fishing.

Sunday, Mr. Morris will deliver the Baccalaureate sermon in the chapel. This opens the last week of school which is devoted to the seniors. On May 21 the Community group will honor the seniors with a banquet. Plans for the affair seem at present to be a a deep secret among the hosts. Rumor says the menu will consist of one B.B. Bat, one Cookie, and one glass of water. Following the banquet there will be a dancing party at which the will and prophecy will be read. It is a common opinion that the outlandish rings and denim skirts worn by the senior girls will be left behind for the Community girls as a last act of sisterly love.

The class of 1941 will present as its gift to the school a print of Van Gogh’s Cornfield and Cypress. The print will be hung in the dining room with the gift of the class of 1940.

After the Commencement exercises the class of 1941 will bid adieu to their Pine Mountain home. As they leave, their comrades hope they will always remain the happy thoughtful people they knew.

Our seniors will soon be entering an entirely different life from that which they have witnessed thus far. A few of them, perhaps, will not continue their education. Some may go on to college for a year or two and then drop out. Of course there can be no true prediction as to this, but let us hope that whatever these graduates enter into they will never become disappointed in themselves. Many obstacles and disappointments will be met; but every one of them if fought hard and thoroughly, whether conquered or not, will prove to be very valuable to the fighter in his life thereafter.

The seniors were recently given a “continue your education” pep talk by a visitor. He mentioned a survey which had been carried on among twenty-one million youth of the country. One very important question asked in the survey was, “Do you think that you have as good a chance for happy life as your parents had?” Ninety millions of those young Americans had self confidence enough to say that the older generation should worry about them.

It would be interesting to know how far those ninety millions will go. Probably the larger percent of them will reach success because of their self-confidence. Of course some will lose that confidence as they too meet disappointments in life which they will fail to challenge. Let us hope that our seniors are self-confident and will use that quality as a tool with which to attain higher goals.

AS OTHERS SEE YOU

The seniors deserve consideration and criticism from under-classmen. It is connimly known that they wandered through freshman year, gained weight as Co-ops, criticized the seniors when they were the Community group, and promptly forgot it all in their exalted rank. Everyone agrees that the Senior Class of 1940-41 has periods of startling intelligence and contrasting blankness. An unlucky listner often opens his mouth and shakes his head in silent bewilderment.

In these flashes and lapses of the seniors, underclassmen see their own mistakes and interests magnified, so they give them a dose of good natured criticism.