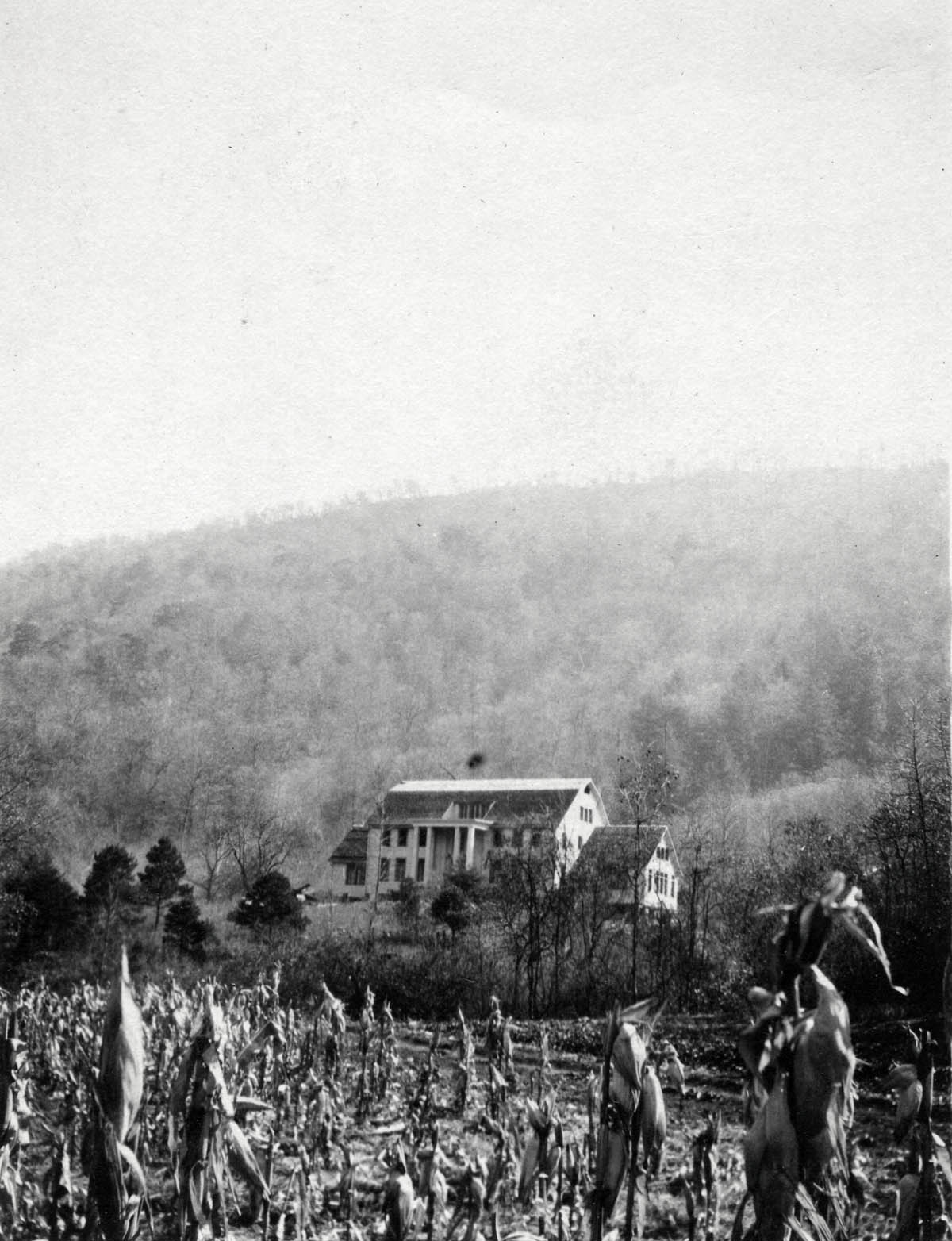 The following contents list and images of FARM AGRICULTURAL CORRESPONDENCE consist of letters between the School’s co-founders and applicants for the Assistant Farm Superintendent position at Pine Mountain Settlement School in 1919 and 1920. The correspondence provides a look at both the hiring practices of the School and the School’s fledgling dairy farm during the first decade of the School’s existence.

[Note: Letters from PMSS staff in the PMSS Collections are carbon copies, typewritten, unsigned, and meant for the Office files. The original signed copies were sent to the correspondents. The initials at the bottom left of most PMSS letters indicate the writer (along with initials of the secretary). For example, “EZ” are the initials for Ethel de Long Zande and “KP” refers to Katherine Pettit, Letters from the applicants are handwritten and original. The following list of contents is in chronological order and not necessarily in the order of the image numbers.]

[001] May 27, 1919. To Judge Bailey, Harlan, Ky, from EZ (Ethel de Long). “I hope very much that you will do everything in your power to secure the appropriation for county agent in agriculture, for Harlan County. … With food prices so very high, I think that every movement which can make the home-grown supply larger should be encouraged.”

[002] June 18, 1919. To Mr. Paul S. Mabie, Evansville, Wisconsin, from [truncated, likely Katherine Pettit]. In response to an ad in Hoard’s Dairyman, in which he is looking for work, she encloses a booklet and describes “what we are trying to do in this very remote section of the Kentucky Mountains.” Tells about the need to hire a married couple to live in the farmer’s house: A man to run the barn (with 9-10 cows), teach the school boys about “model dairy work” and the wife to care for the poultry yard (containing about 500 White Leghorns and Plymouth Rocks), and serve as housekeeper/housemother the boys in Farmhouse. She describes the school staff (15-18 workers, all college graduates or professionally trained), the railroad, nearest town, and the approximately 80 students. “This is an industrial school where the children are learning everything about life in the country, from proper sanitation to good farming and carpentry work, and country school teaching. It is hard work, done under almost pioneer difficulties with the satisfaction of seeing results in the children….”

[003] June 20, 1919. To Pettit from Mabie, who is currently employed on the E.B. Adams farm in Racine. He asks for more information about a wife’s position as housekeeper/housemother. He proposes a salary higher than the $85 per month he now receives; provides three references.

[004] July 8, 1919. To Mabie from KP (Pettit), explaining the wife’s duties with 8 to 12 students in the Farmhouse. Asks if he is a “good milker…. [W]e want someone who will sit right down and show the boys how to do the work.” Asks if his proposed salary would include his wife. Mentions that one of the workers has started Boy Scouts, with which Mabie has had experience. Informs him that sometimes the staff helps out with farm jobs.

[005], [005a] July 11, 1919. Two-page letter to Pettit from Mabie, with additional questions and assurance that he and his wife can do the work; suggests a wage of $1300 per year, plus railroad fare, and would include his wife’s salary. Suggests Mrs. E.P. Kastler as a reference, describing her as “a leader in the Central Association of Racine, [whose] interests are to look out for young men and women.”

[006] July 17, 1919. To Mrs. E.P. Kastler, Racine, WI, from KP (Pettit), asking her for a statement about Mabie’s “personality, adaptability, success in working with young people of very different background from the ordinary high school boy; physical stamina, initiative, loyalty to work,” aside from his technical qualifications.

[007] July 17, 1919. To Mabie from (unsigned), Secretary, writing to him that Pettit is temporarily away from PMSS; answers his question about Laurel House meals.

[009] November 16, 1919. To Pettit from Marion Bunnell, Pacific Grove, CA, stating that she “should be glad to come to Pine Mountain, when you have need of me….” and asks for information.

[010] January 2, 1920. To Bunnell from KP (Pettit), enclosing School literature and providing information about the School’s ten cows: “a couple of Jerseys, a Guernsey, four Holsteins, and mountain stock.” Pettit will keep her name on file.

[012] January 30, 1920. To Mr. Dorsay from [truncated], who tells him he must not base his decision about PMSS vs. a new proposition on “an immediate expectation of another increase in your salary.”  The School’s budget doesn’t justify it and, also, it’s not worthwhile to consider when he plans to be at PMSS only a few months. PMSS hopes he will stay until August.

[012a] N.D. Reverse side of [012]. To “Kate” (Katherine Pettit) from “E. Zande,” reporting that, during a meeting with Mr. Dorsay, he described a position elsewhere that he is considering. She asks Pettit whether to advertise for someone else now “before heavy farm work begins, so there will be somebody to help with making the pasture as well as looking after the cows.” Meanwhile, Miss Andrews will be coming to PMSS to care for the chickens and boys. Luigi [Zande] and Leon [Deschamps] will care for the cows. Evelyn [Wells] will look into whether he had any “testimonials.” [Notation at bottom of page in Ethel de Long Zande‘s handwriting: “Yes, advertise & go ahead. I’ve made inquiries here, but nothing promising. So inexperienced & such large salaries wanted.”

[013] February 4, 1920. To Paul S. Mabie, Racine, WI, from KP (Pettit). “…[T]he present incumbent is obliged to leave unexpectedly, and we must fill the place again.” Asks if he can come to PMSS and whether his wife could run the poultry yard instead of housemothering.

[017] February 6. 1920. To Hoard’s Dairyman, Fort Atkinson, WI, from [unsigned] expressing interest in an advertisement in their February 6 issue. [A copy of the ad is pasted on the letter: “Wanted — Position as herdsman or dairy farm manager by capable and experienced college graduate. Address…, care Hoard’s Dairyman.”] The letter describes PMSS’s dairy and the school boys who do the work; asks what salary he would consider; encloses school literature and asks for more information.

[018], [018a] February 18, 1920. Two-page letter from L.L. Olson, ℅ M.H. Campbell, University of Illinois, Urbana, IL. Showing interest in PMSS’s offer of a “herdsman” position, he provides details about himself: 30 years old; will be married this year; graduated from College of Agriculture at Missouri University about a year ago. “I have spent about seven months supervising official test of dairy cattle in the state of Illinois.”

[020] February 23, 1920. To Olson from EZ (Zande), enclosing a questionnaire and showing interest in his candidacy, since PMSS’s current dairyman may be leaving this spring. Describes the herd (12 “milch” cows) and the tasks that the position involved, as assistant superintendent on general farm work.

[021] February 23, 1920. To “Gentlemen,” PMSS, from L.L. Olson, stating the salary he would expect (“$100 per month and board and room in addition”) and, after his marriage this year, “I would expect equal value, it might or might not be as much cash.” Offers to send letters of recommendation. Asks the students’ ages and if the School has purebred cattle. 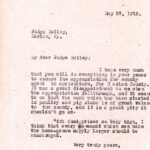 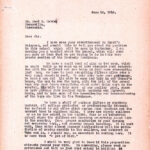 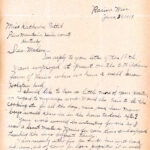 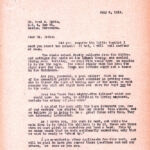 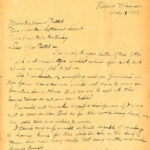 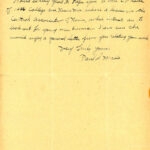 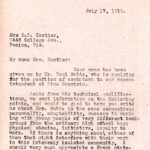 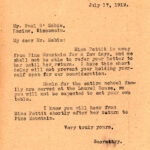 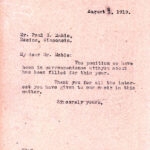 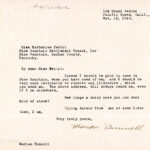 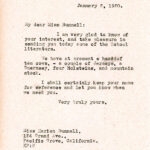 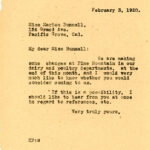 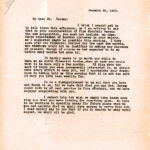 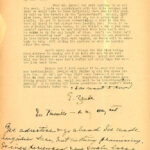 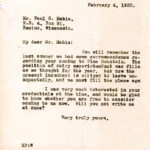 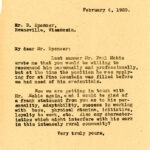 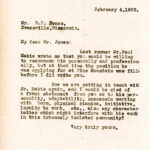 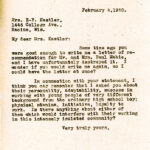 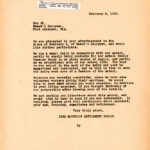 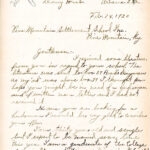 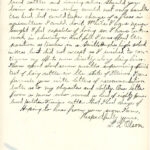 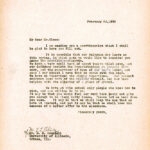 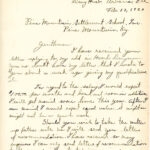